Has Chewbacca ever ripped anyone's arm off?

From A New Hope:

Chewbacca: Aaaaaaaaaaaaaaaarrrgh!
C-3PO: He made a fair move. Screaming about it can't help you.
Han Solo: Let him have it. It's not wise to upset a Wookiee.
C-3PO: But sir, nobody worries about upsetting a droid.
Han Solo: That's 'cause droids don't pull people's arms out of their sockets when they lose. Wookiees are known to do that.
Chewbacca: Grrf.
C-3PO: I see your point, sir. I suggest a new strategy, R2: let the Wookiee win.

While Han was probably joking, it raises the question; was Han basing this on personal experience? Had he ever seen Chewbacca rip anyone's arms off? 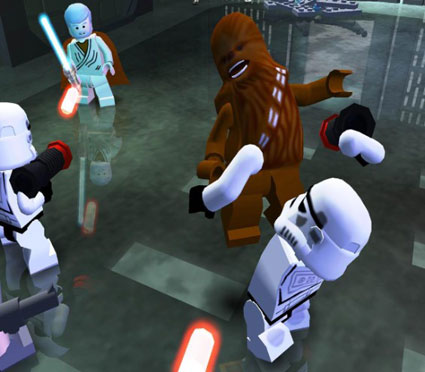 And then, of course, in the Lego Games... 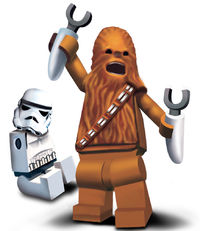 The canon section only makes reference to the excerpt from A New Hope cited in the question. Hence, it's reasonable to assume that Chewbacca probably has pulled out someone's arms before in canon, it's just we haven't seen it!

The Wookieepedia page on Wookiees explains that:

Wookiees also had the justified reputation of ripping the arms of their enemies out of their sockets, which was known to occur in instances of losing a game. That state of racial rage served as the basis of the deal-slang expression "wookinate", which referred to the rendering harmless an enemy using excessive force—obviously referring to the great physical strength that provided the essence of Wookiee combat

In the latest edition of the Marvel Star Wars comics (considered a full part of the Star Wars canon) Chewie does indeed rip a droid's arm off. He then proceeds to use the ragged end to beat the unfortunate former owner to death.

You may wish to note that this is set after after ANH and that Han was actually not present at the time of the assault. 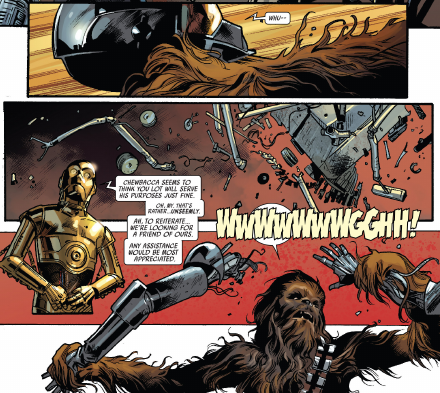 In a deleted scene from The Force Awakens (2015) the character Unkar Plutt gets his arm ripped off by Chewbacca after he confronts and threatens Rey in Maz Kanata’s castle. Unkar harasses Chewbacca by poking him in the arm—right where he was wounded—and Chewbacca responds in kind by ripping Unkar’s arm off. This scene is supposedly a part of the deleted scenes on the Star Wars: The Force Awakens 3D Blu-Ray that was released on November 15, 2016.

Just note that I’m not too clear on whether a deleted scene like this is considered “canon” but I guess that is hinged on whether Unkar Plutt shows up with both arms intact in a future film.

Currently active YouTube video can be found here. It can also be seen on Imgur right here.

The release of new canon necessitates a new answer to this question.

Yes, in canon too.

Grabbing the thrusting arm, a roaring Chewbacca twisted and ripped it off at the shoulder, throwing the dismembered limb clear across the room. Looking down at himself, Plutt let out a scream of agony

Although this didn't appear in the released film, rumour has it that it was filmed in a scene which has since been deleted.

3
Which named characters have gotten their limbs torn by Wookiees?

61
Toilets in the Galaxy Far, Far Away
32
Why doesn't Chewbacca learn to speak Galactic Basic?
26
Has Han met a Wookiee aside from Chewbacca?
16
Why did Obi-Wan lop off Ponda Baba's arm?
5
Whose arms would Chewbacca have ripped off?
18
Does Chewbacca shed?
6
Has Han ever successfully posed as an Imperial before?
23
Has Qui-Gon ever visibly appeared as a Force ghost?
2
Has the republic ever used the Jedi as a threat?