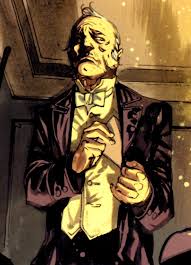 However, there was already a very well-known comic book butler named Jarvis; Edwin Jarvis, the butler of Tony Stark and the other Avengers, who first appeared in the 1960's.

Has anyone connected to DC ever commented on why this name was chosen? Was it an intentional reference to the Marvel character?