How much money does Alfred Pennyworth earn?

Alfred starts serving Waynes to honor the dying wish of his father and becomes Bruce's legal guardian following the deaths of his parents (Thomas and Martha left a will).

Is it mentioned anywhere in comics or cinematic universe, how much money Alfred earns while serving Waynes and how does Alfred get his payments when when Bruce is just a kid? Does he own part of Wayne enterprise?

I don't recall this information being addressed in the comics, much less in the cinematic universe-Nolanverse. According to this reference he earns 80K as a butler and another 150K as a Wayne State manager. 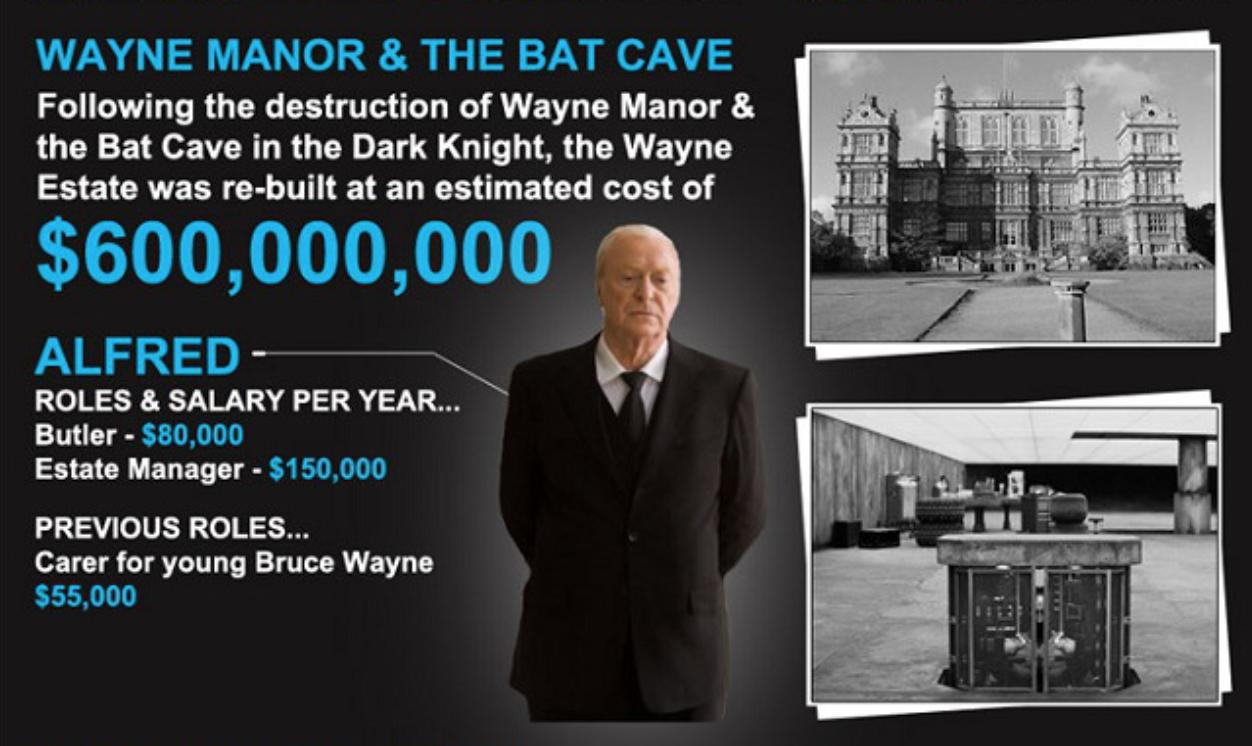 A butler usually earns a salary between $50.000 and $150.000 annually, plus benefits. We realize that the salary indication is very broad but it is what it is. A butler can be a live-in or live-out employee.

So the information in the picture seems to be "in range".

The payments can be done via a third party, or even Alfred "pays to himself". Basically, if you have kids you may want to make a will in case that (God forbids) something happens to you. There is something called a trust (and probably I may upset lawyers for oversimplifying) but in case that you want to leave everything to your kid, but don't want to leave him a big amount of money when he is not old enough or mature to spend it wisely, you leave it to a trust or third party to administer it. Alfred or some lawyer can be that third party (Alfred could have been named in the will both legal guardian of Bruce and manger of the trust for Bruce's inheritance). Since the Wayne trust him enough to make him legal guardian of Bruce they could very well trust him to administer Bruce's wealth and be honest when paying himself his own salary.

Alfred may own part of Wayne enterprises. After all, buying stocks of the company seems like a reasonable way of investing. If the Wayne left him any participation of the company(ies) on their will is unknown on the Nolanverse. Also Alfred could very well be one of those "various charitable foundations, trusts and so forth" that Bruce uses in Batman Begins to reclaim control of Wayne Enterprises.

Not the answer you're looking for? Browse other questions tagged dc batman gotham money or ask your own question.

36
How was Bruce Wayne able to reclaim control of Wayne Enterprises in Batman Begins?

47
How much money did Harry Potter have?
1
What purpose does Alfred Serve?
10
Where is Alfred Pennyworth in the Batman origin story?
11
How does Bruce Wayne mask Batman's injuries between beatings?
15
Why are some villains in Gotham so much older than Bruce Wayne?
12
Is Alfred the moral conscience of Bruce Wayne/Batman?
2
How much do Aurors earn?