I read a fantasy novel in 2006 which featured an imaginary platform at King's Cross railway station in London, but was NOT Harry Potter!

It featured a magical island hidden by fog, from which there was an exit opening onto this platform. The prince of the island had been abducted as an infant, and many years later, three beings from the island - the youngest of whom was a hag - were tasked with bringing him safely home. This involved a lot of messing around in the real world, and a case of mistaken identity when they very nearly brought the wrong boy home.

One of the minor characters was a small woman who knitted a lot and used knitting needles to stab her enemies. A small detail, but somehow it stuck in my mind.

Any idea what the title and author of this book might be?

The Secret of Platform 13 is a 1994 novel by Eva Ibbotson that involves a magical portal at the eponymous platform at Kings Cross. Three are sent to retrieve him, including a young hag:

To rescue the prince, the king and queen organize a group who will venture into London the next time the gump opens. The group consists of a giant, Hans (who was made invisible so he wouldn't stand out), a "slightly batty" fey, Gurkintrude, a wizard, Cornelius, better known as Cor, and a young hag named Odge (who joined because she was the same age as the prince would be and felt a sense of kinship to him as a result. She also brought a present).

They do indeed go for the wrong boy.

When the gump opens, the rescuers are directed to the Trottle house by the ghosts that live in Platform 13. There they see Raymond Trottle, who has grown up to be fat, lazy, and very spoiled. He seems to rely on his telly, his computer games and his remote control cars. They also meet the household servant, a boy named Ben. Ben is the exact opposite of Raymond and immediately feels comfortable with the group and befriends Odge.

The group begins to observe Raymond and after some time arranges for him to meet them in the park where they arrange for various magical creatures to perform a show for him. Though Raymond is unimpressed by the magical performance, he is delighted to discover that he is really a prince and agrees to return to the Island. Odge tries to convince Ben to come to the Island as well, but he refuses as Nanny (who raised him) is very ill and in the hospital.

As for the knitting needles, TV Tropes notes:

One of Raymond's bodyguards is a little old woman who spends most of her time sewing. With very long, sharp needles, and she knows exactly what points on the body they'd be most effective. 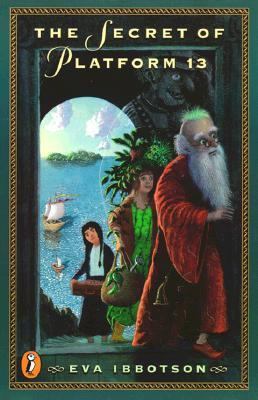