Is the Aquaman symbol an 'A'?

Most people know that the Superman symbol is not an S, it just happens to looks like one.

(Related: Why was the Superman's symbol an *English* letter "S"?)

Is the same true of the Aquaman symbols,

Or does it legitimately stand for either Aquaman or Atlantis ?

The A on Aquaman's belt is a glyph which stands for Atlantis. 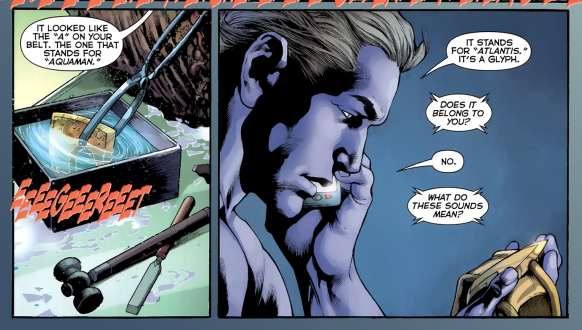 The only piece of actual Atlantean writing I've been able to find is by Atlanna (Aquaman's mother), taken from Aquaman: Time and Tide #1 (from 1993): 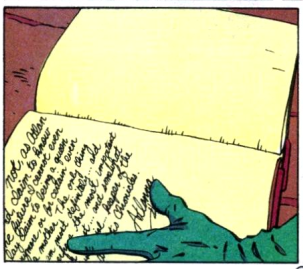 This appears to be using an English alphabet, suggesting that it is both the symbol for Atlantis, and an A.

This text came from the closing narrative of The Atlantis Chronicles #7 (from 1990). Here she is talking about the journal:

And writing in it: 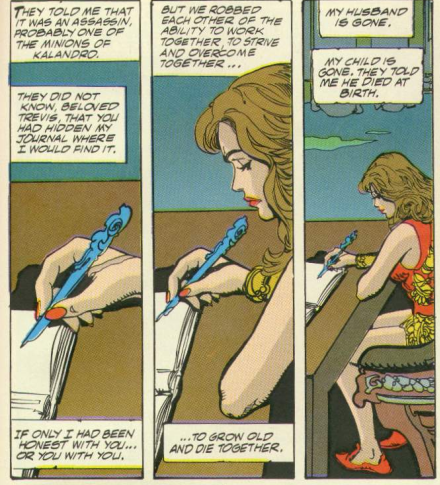 I've not been able to see anything to suggest a distinctive Atlantean alphabet within DC Comics lore, such as there is for Kryptonian and Superman's "S".

IGN mentions this when discussing the film costume:

The "A" on his belt is of course the "A" for Aquaman. However, just as Superman's "S" shield has gone on to become a family crest and a symbol for hope, so has Aquaman's "A" in the comics. Firstly, the symbol represents Atlantis in the Atlantean alphabet.

Not the answer you're looking for? Browse other questions tagged dc symbols aquaman or ask your own question.

6
What exactly do the eighth and ninth symbols in a stargate address represent?
4
Aquaman's origins in Batman vs Superman
13
Why does Superman love Lois Lane?
3
What were Felicity and Ray saying about Supergirl?
12
How many languages does Aquaman speak?
14
Superman watches as the Earth is disassembled by aliens
46
What Marvel character has this 'W' symbol?
3
Why are DC's Merfolk, like Lori Lemaris, different from other Atlanteans, like Aqua Man?
5
Is there any information as to if DC dropping or "Rebooting" the DCEU?