Does the Starship Troopers movie take place in an alternate future where the Nazis won?

The parallels seem pretty obvious, especially when you see Neil Patrick Harris' costume near the end of the film: 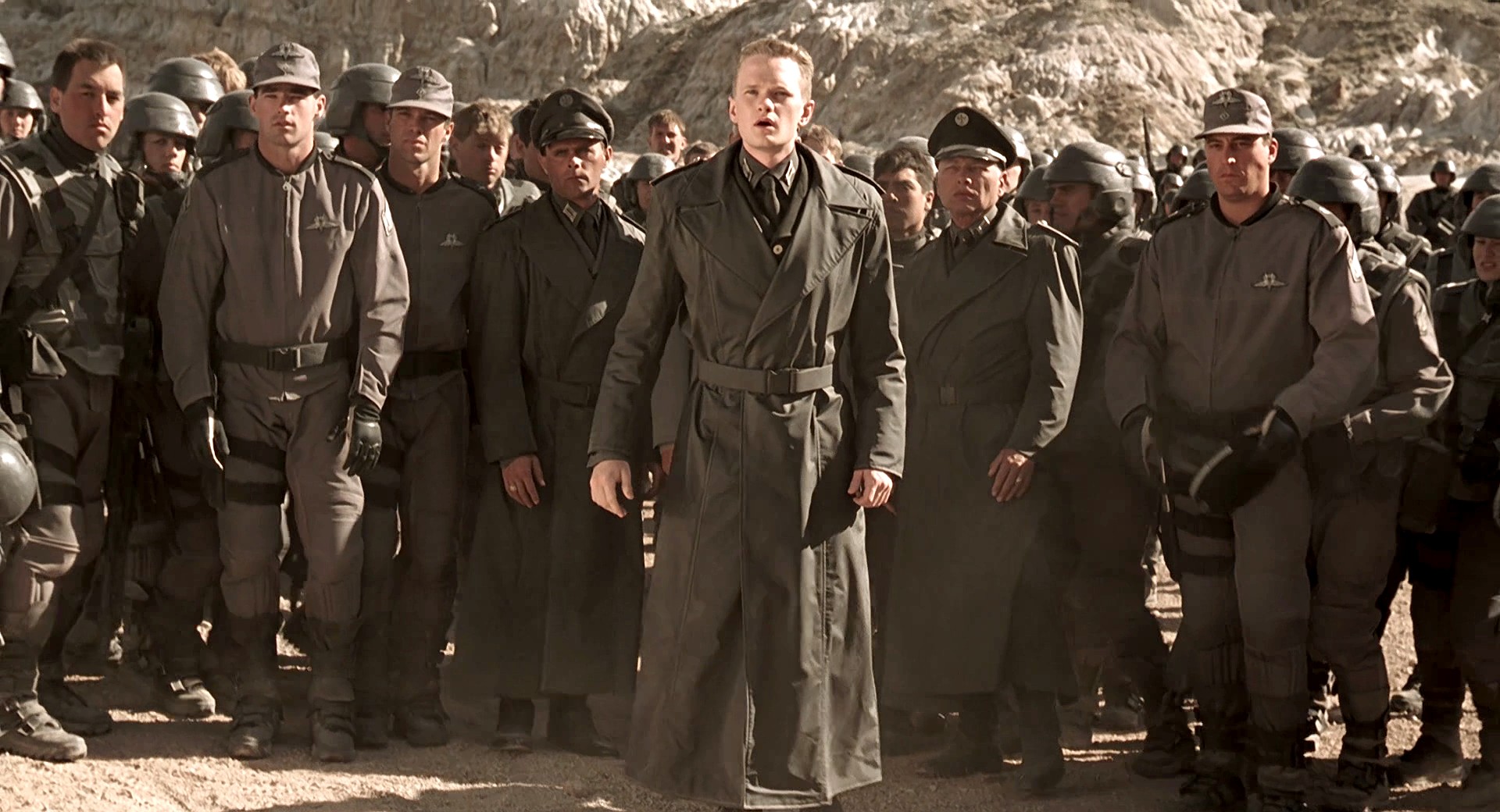 Has there ever been any official word? And is there more that I've missed?

I'd just like to point out that I'm specifically asking about the movie and not the book. Also, I found this on the film's wiki page:

The film included visual allusions to propaganda films such as Why We Fight, Triumph of the Will and wartime newsreels. The symbols, and certain clothing styles, of the Federation are modeled on those of the Nazis (e.g., windbreaker, suits, cap, etc.; moreover, the military intelligence officers' uniforms bear a striking similarity to those of the Allgemeine-SS). The satire was embedded in action sequences with special effects.

But costume modeling aside, is there any word on the official Starship Troopers movie timeline on the outcome of World War 2?

Well. I only saw the first movie, so I don't know what might have transpired in later straight-to-video sequels.

At the beginning of the first movie, in the class, there is a lecture taking place:

Rasczak: I wonder what the city fathers of Hiroshima would say about that.
You.
Carmen: They probably wouldn't say anything.
Hiroshima was destroyed.
Rasczak: Correct.
Naked force has resolved more issues... throughout history than any other factor.

Presumably this is referring to Hiroshima being destroyed by an atomic weapon dropped by the United States. It is hard to imagine the US dropping this bomb on Japan while allowing the Germans to achieve victory.

The short answer is no, it's not a future of an alternate history. The film is a deliberate satirization of the novel's fascist themes, and a lot of that satire takes the form of Nazi-associated material.

In the director's commentary on the film, he is asked directly if his Nazi symbolism was deliberate, specifically referring to the swastika-shaped government building. His reply was "of course it is deliberate."

While the original novel has been accused of promoting militarism, fascism and military rule, the film satirizes these concepts by featuring news reports that are intensely fascist, xenophobic and propagandistic. Verhoeven stated in 1997 that the first scene of the film (a conscription advert for the mobile infantry) was adapted shot-for-shot from a scene from Leni Riefenstahl's "Triumph of the Will" (an outdoor rally for the Reichsarbeitsdienst). Other references to Nazism in the movie include the Gestapo-like uniforms of commanding officers, Albert Speer-style architecture and the propagandistic dialogue. (Violence is the supreme authority!)

Obviously the novel's themes are up for debate. My opinion is that the novel itself was critical of the militaristic state while (genuinely) glorifying the working members of the military. But the movie's departure from the novel was not an accident, nor was it the result of poor film-making (also up for debate, I suppose), but rather a deliberate commentary on its own source material.

So you could love the film for its explosions and co-ed shower scenes. Or you could hate it because it wasn't a "correct" retelling of the original story. Or you might again love it because it so accurately plucks out the more subtle elements of Heinlein's novel.

Neumeier explains it in 'The story of Film: An oddyssey' Part 14: (38minutes 39 seconds in)

The idea came from Veerhoven speculating about making a film about youths in pre-WWII Germany signing up for military service and not realizing they are the bad guys...

Nope, nothing to do with the Nazi party. The film is a satire. It's taking the piss out of fascism. To do that it's using the common look and feel of the Hugo boss SS outfits so that everybody gets it. "Get it" In the quoted scene "Richek?" refers to the Origins of the Federation as the "Founding Fathers" an american reference.

So yes the Federation is supposed to look like Nazis, but they're not actually Nazis though.

Robert Heinlein, who wrote Starship Troopers and a number of other classic sci-fi, was in his life, both a support of Communism and a supporter of Capitalism. Starship Troopers, the novel, contains elements of both economic systems in a more realistic way than most have portrayed either on their own. He understood the value in Democracy (not what you might think of but rather authentic Democracy) and that this Democracy requires military power to protect it, both from within and without, and this element likely appears as Fascism to some, and it could be. You could have Fascist Democracy, but first you would need to have a Democracy and move beyond Capitalism. I recommend his other novels most especially Stranger in a Strange Land and The Moon is a Harsh Mistress.

Not the answer you're looking for? Browse other questions tagged alternate-history starship-troopers or ask your own question.

42
Did Heinlein advocate the apparently militaristic, if not fascist society of Starship Troopers?
15
Was Verhoeven's Starship Troopers intended to be a satire on war or a parody of the book? Was it authorised to be such?