Here's what I recall about it:

Notorious criminals have their consciousness pulled out of their bodies, after which the body is frozen and the mind is locked up in a super secure cyber-prison. Big Bad Guy's friends hack into the prison and pull out his consciousness, which takes the form of a glowing blue energy person in the real world. To have a functioning body, he goes into some kind of rubber-spraying chamber and gets a layer of the stuff over his blue energy. He eventually kills a guy with it, by pushing him into the chamber and spraying rubber over him until the guy suffocates.

He eventually tries to go get his body out of cryo, but the Big Good Guy gets to it first and puts a couple of bullets through its head. Bad Guy is mad.

Bad Guy can also reach through the Internet, put his energy hand through a person's computer monitor and shock them to death.

The Good Guy eventually also turns himself into an energy being, they have a fight, Good Guy wins.

Don't know the exact year, country or anything... Thanks for your help!

If your Big Bad Guy was a dreadlocked tan body builder in a white bodysuit then Hologram Man (1995) is your answer. 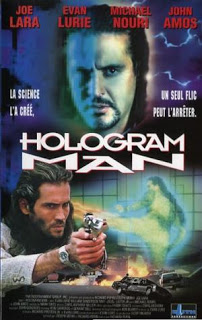 Violent & crazy (best combo) Slash Gallagher is arrested by cop Kurt Decoda then sentenced to "Holographic Stasis". His body is put into stasis, while his mind is adjusted. Slash's gang of cyber criminals break him out, but his body is destroyed in the attempt. Slash is rendered an energy hologram digital body. Lots of early 1990 special effects, big explosions, tough guy one liners and bigger explosions. Your energy hand through monitor to electrocute is there.

Not the answer you're looking for? Browse other questions tagged story-identification computers cyberpunk cryogenics or ask your own question.

7
Cyberpunk/Post-Apocalyptic Sci-Fi series from the 90s or 00s based in Manhattan
3
looking for a sci fi cartoon (american) from late 80s early 90s
12
Looking for a (short?) story about a cryo ship looking for habitable planets
3
Trying to find an animation sci-fi movie from late 80s-90s
10
Space cartoon from the 80s or 90s
7
Looking for a book from late 60s to 1972 sold through the Scholastic Book club in schools
7
Older dubbed film with partially ape-like evil henchmen