Where is a droid's brain located?

Inspired by this clip, I was wondering where the brains (CPU's?) for the B1 battle-droids and C-3PO are located.

So, - Where is a droid's brain located? - Do they have more than one brain (and if so, how many brains do they have and what is each brain responsible for)? 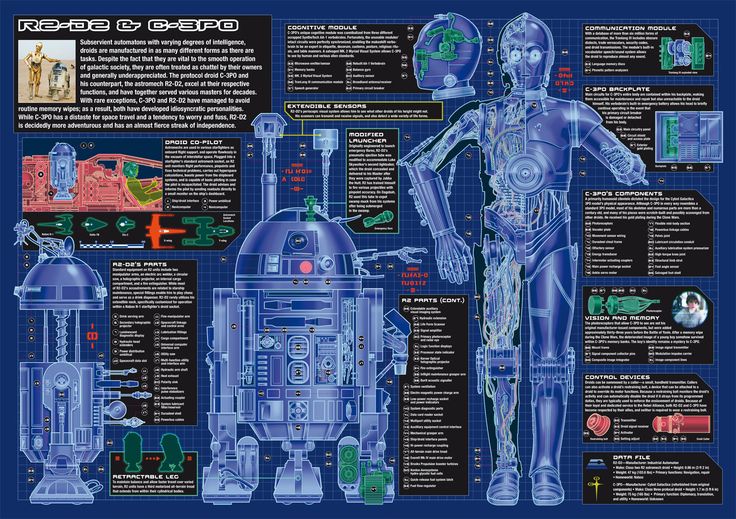 Note the "COGNITIVE MODULE" in the cranial unit.

I could not find a canonical schematic or description of the internal workings of the B1 battle droid, but I was able to find this pertinent description of it in the online documentation for the game Star Wars: Republic Commando :

The standard "infantryman" of the Confederacy, the black-armored B1 Battle Droid is an upgrade of the Trade Federation's B1 as seen across the galaxy, and in the recent Trade Federation blockade and invasion of the planet of Naboo. They are relatively weak enemies, but make up for their weakness in pure numbers. They are typically equipped with a small, hand-held blaster rifle. WEAK SPOT: The "head" contains the neural circuits. Destroying it destroys the droid in quick order.

It would seem then, in-universe, that the odd behaviour we witness when their heads are swapped must be due to mismatched components or some other incompatibility.

It's also possible that the B1 body has a built-in failsafe to prevent it from having its cognitive module replaced with a unauthorized one (e.g. to make it turn on its fellow B1's during battle). When the "Jedi scum" who replaced the module turns the unit back on to test it, a command stored in some fixed memory in the body is implemented, causing the droid to say "Die Jedi scum" and then fire upon him or her (although this is pure speculation).

As jjskellie points out, that particular scene is probably artistic license for the sake of humor.

It's highly unlikely two completely separate robots would happen to have perfectly compatible head/body interfaces, neck sockets, intra-body communications protocols, etc. It also seems rather iffy that a head would just pop into place on its own, considering we don't see any of the robots do anything similar at other times. Even in that scene, R2-D2 has to re-attach C-3PO's head to his own body.

However, we can note that in the scene neither head is able to fully interface with its new body, so perhaps the interfaces are smart enough to connect with arbitrary ports. But because of how different the connections are, the attempt to interpret the new signals had minimal success.

It makes sense that some of the electronics would be in the head, near the eyes and ears, but it also makes sense that as much functionality as possible would be kept in the more-defensible torso. So perhaps while C-3PO's interface was making sense of the battle-droid's components it connected to a battle-cry module.

As I recall, there are a couple scenes like that in the prequel movies, and they seem to imply some remote connection between head and body. This makes less sense for a communications droid, but a battle robot could definitely use the ability to continue fighting while dismembered, and the Star Wars universe is full of gadgets that could allow such communication. With each head trying to remotely control the old body and simultaneously trying to adapt to the new body (and fighting the old head's attempts to control the new body), it would certainly make sense that both robots would be rather confused.

Also, the battle droid seems to have much better success continuing to use both bodies than C-3PO, which again makes sense. The battle droid would be programmed and designed to continue fighting with any and all resources available, while a protocol droid would have little use for that kind of circuitry.

Again, I'm going with artistic license as the driving force behind the scenes, but it's not entirely implausible either.

My answer is who is asked. Ask a layman: CPU = Brain, brain is in the head. Ask an artist: CPU is whatever looks head-like. Ask a technician: CPU is wherever the instructions tell me it is at. Ask an engineer: CPU either singular or multiple is what makes the most desired workable design. If a engineer designed a droid the CPU would be in the most survivable part; i.e. the main body.

OK, that boils down to my answer which is main CPU desired to be in the head by laymen and artists with multiple other CPU & RAM memory to share the load for overall body. Look how PCs are evolving with separate units having their own independent memory today.

Or for the reality minded the Director wanted a funny part here, reasons why don't matter and shoot that engineer guy.

17
Where did C-3PO's fussy and worry-prone personality come from?
9
Do battle droids ever “rank up”?
9
Why are droids killed when chopped in half?

19
In the Star Wars Universe, where do droids get their personality?
3
Where is Athiss located?
9
Why are droids killed when chopped in half?
18
Where do R2-D2's drinks come from?
16
Where is Vader's fortress located?
11
Where was the Chancellor's office located in the Senate Office Building?
7
Where was Luke's Jedi Temple/Academy located?
10
Why was this droid's “death” permanent?
3
Why did the droid's escape pod land so near to Mos Eisley?