Who is the other robot queuing in the HHGTTG movie?

In the movie, there is a scene where the "heroes" are queuing to get Trillian released. There is a familiar looking robot in the background.

This is the original Marvin used in the BBC TV series. Here is is, from BBC Online: 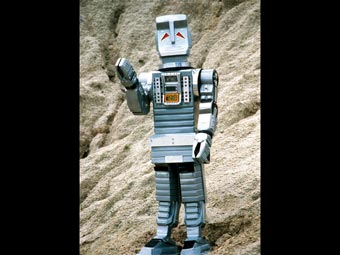 A recreation of the [Marvin] costume from the 1981 television series makes an appearance in the film, as one of the robots standing in a queue on Vogsphere, where the main characters are trying to release Tricia.

See also Geek Twins and eeggs (and another eeggs link).

It's Marvin as he appeared in the 1981 BBC TV series