A while back me and my best friend found 2 books about 2 completely different alien species who want to take over the earth and who are fighting for it. The catch? Each book was told as the perspective of one of the 2 aliens species! So one book is the story from one perspective and the other book is from the other perspective of the other race!

This sounded very interesting and me and my friend wanted to each read a perspective and then discuss the book! The only other thing I remember about the books is that the 2 covers made 1 whole with in the bottom middle the earth with humans fighting on it and to the left the ''purple more primitive bloblike'' aliens and to the right a ''more advanced blueish alien ship from the smart aliens''.

This is probably Empires: Extraction and Empires: Infiltration by Gavin Deas (actually a pen name for Stephen Deas and Gavin Smith, each one wrote the majority of one point of view).

As you can see, this matches the cover you describe, both the blue ship/blobby aliens and the fact that they combine: 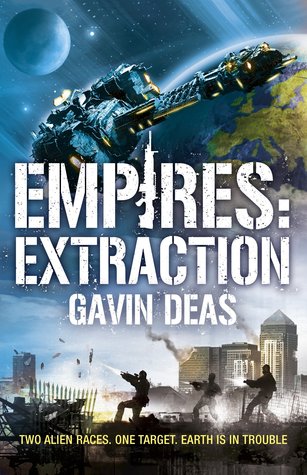 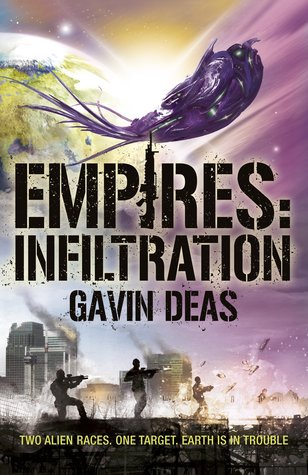 And the description backs up the "two perspectives" part of the plot.

This groundbreaking collaboration between two Gollancz authors tells of the invasion of Earth by two different alien races - at the same time. Two men become aware of the threat, and must work to sabotage the invasion plans and see off the aliens.

Each book follows one hero, uncovering the threat to humanity and the world from their point of view. Each book can be read on its own, and will give the reader a complete, kinetic, fast-paced military SF story. But read both books and the reader gets something else - another view of (some of) the same events and crossover points, culminating in a bloody battle at Canary Wharf.

The two books can be read in any order, but together they tell the story of humanity caught in the crossfire between two deadly alien races, who have made Earth their battleground...

It was published in Nov 2014, which tracks with the "about a year ago" recollection of the asker (who posted in Oct 2015)

16
Book about aliens who attack Earth and destroy the Sun
5
An advanced alien species landing on Earth after it has been destroyed
11
A story about Earth warriors who think they are fighting aliens, but discover they're fighting other humans
11
Short story about shark-like alien species that eats other sentient aliens
4
A book about aliens living on Earth who look like humans