Can the Flash use his powers and super speed without the Speed Force (e.g. outside the DC universe)?

Can the Flash use his powers and super speed outside the DC universe?

If the DC speedsters draw their powers from the Speed Force, and the Speed Force exists in the DC universe only, does it mean that the Speed Force is their only source of speed, and they are reliant on the speed force to even run fast, let alone other abilities such as using the infinite mass punch and time travelling?

As an example, a friend of mine was comparing Quicksilver of Marvel to Flash of DC (mainly Barry Allen, but anyone who uses the Speed Force is applicable), and he said that outside the DC universe, say in the Marvel Universe, Flash would be powerless with the non-existence of the Speed Force, and he wouldn’t even be able to run fast.

The short answer is "he very well might lose his power". The longer answer requires understanding how DC structures their comic book stories, so buckle up.

The terminology is a bit confusing here, because Marvel and DC don't have "universes", they have "multi-verses". Since you're specifically asking about "in another universe", it's important to make that distinction.

The "DC Universe" is not one universe. It's actually a multi-verse, consisting of many different universe with their own separate histories, characters, etc. The Flash from one DC universe (e.g. "Earth One" or "New Earth", depending on what year is it) can travel to a different DC universe within the Multiverse with no problem. In fact, Flash is somewhat unique in this regard, as the Speed Force is often cited as the key element of the multiverse that ties such things together. Thus, if you're using universe in the sense of "the entirety of space and time in a particular physical reality", then Flash can go to all kinds of universes, and be just fine.

However, DC also has the concept of multiple multiverses, which is usually called "The omniverse". The Marvel multiverse exists within this omniverse, and on very rare occasions, DC characters can go there as well. However, there's some things to keep in mind here:

Having said all that, one of the most popular DC/Marvel crossover events was the "Avengers/JLA" crossover from 2003. In that series, the JLA from DC's main New Earth were pitted against the Avengers from Marvel's main Earth-616 as part of a pan-multiverse game between two really powerful entities.

Flash was able to travel to Earth-616 in person, but once there he found that there was no Speed Force, and so he lost his powers. Eventually he is pulled back into his universe. Quicksilver, on the other hand, has no problem using his super-speed on New Earth -- though he does lose the fight w/ The Flash in that setup.

So, yes, it is true that in at least one case where The Flash found himself in a universe that is not part of DC's usual multiverse, there was no Speed Force and he lost his powers.

Well...I can give one sort-of example where Barry Allen traveled to the Marvel Universe and did indeed retain his speed. How canonical you want to consider it is up to you. But, arguably, according to Marvel he absolutely kept it. How DC felt about it is another matter entirely.

Also, Flash did retain his speed during Marvel VS DC when he did indeed beat out Quicksilver.

The answer is YES. He would still have his powers.
Bart Allen aka Impulse, Barry Allen's relative from the future who is also a speedster was missing running through the speed force. Once he comes back out of the speed force he says,

"Crazy day, even for me. One minute I'm running to Canada to join Alpha--Oh Man."

Link to article on it.

Now, whether he was faster than Quicksilver, it doesn't say.

In the JLA/Avengers crossover from 2004, Wally West was unable to access the Speed Force while in the Marvel Universe, and therefore had no powers whatsoever. 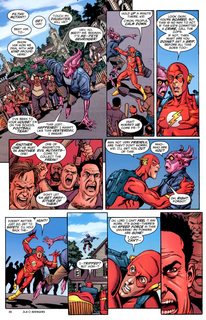 Steel subsequently built him a harness that stored up Speed Force energy while he was in the DCU, which he could then tap into while in the MU. 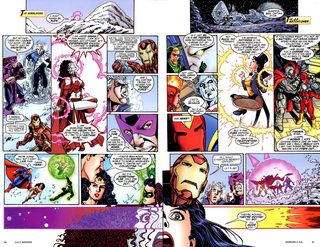 Wally also appeared in the earlier DC Vs. Marvel crossover from 1996. His powers seemed to work fine in that crossover, although it wasn't explicitly stated which universe he was in in the few scenes he appeared in, and the universes were shown to be merging to some extent, with Four Freedoms Plaza (the Fantastic Four's HQ) popping up in Metropolis, right between the Daily Planet and LexCorp buildings. 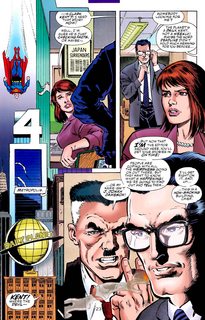 In the first sequel series to DC Vs. Marvel though, All Access, Wally (along with the rest of the JLA) was explicitly transported to Dr. Strange's Sanctum Sanctorum in the Marvel Universe, and his powers seemed to work just fine. 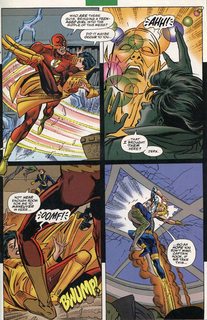 Impulse was also transported to the Marvel Universe in the second sequel series, Unlimited Access, and his powers seemed to work just fine as well. 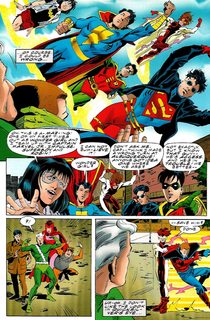 So you can take your pick as far as the official crossovers go.

Regarding the 'Buried Alien'/Fastforward character, who appeared in Quasar Vol 1 #17 and #58, and was mentioned in some of the other answers; although the character was clearly a nod to Barry Allen, I wouldn't treat this as a canonical appearance of Barry until and unless DC Comics themselves acknowledge it as such, which they haven't, to my knowledge. In lieu of that, it's just a playful nod to the Distinguished Competition, comparable to other unofficial cameos we've seen in both the DC and Marvel universes.

By contrast, DC Vs. Marvel/All Access/Unlimited Access and JLA/Avengers have been referenced within both DC and Marvel publications, so those are at least semi-canon, albeit they somewhat contradict one another.

Quick Silver's top noted speed, to my knowledge, is about Mach 10, while Flash has been known to travel several trillion times the speed of light... rescuing 500 thousand people from a nuclear explosion within something like 0.000001 Second. I'd say that ranks Flash a wee bit faster than anyone in the Marvel Universe that I can think of.

The Crossovers are generally non-canon, though, so whether or not he loses his connection to the Speed Force in the Marvel Universe is 100% up to the writer of the story in question. Once the story is over the things that happened in them are treated as if they never happened by DC or Marvel.

The cosmology of the Speed Force is always changing based on the era, writer, context, and accordingly its mechanics.

Grant Morrison's work-around is that basically all worlds are a part of the "DC Universe" and just about all of the rational realms (tangible, scientific, material, and real... vs. magical, spiritual, metaphysical) were surrounded and governed by the Speed Force. You can see a pictorial illustration of this principle in the infamous Map of the Multiverse: 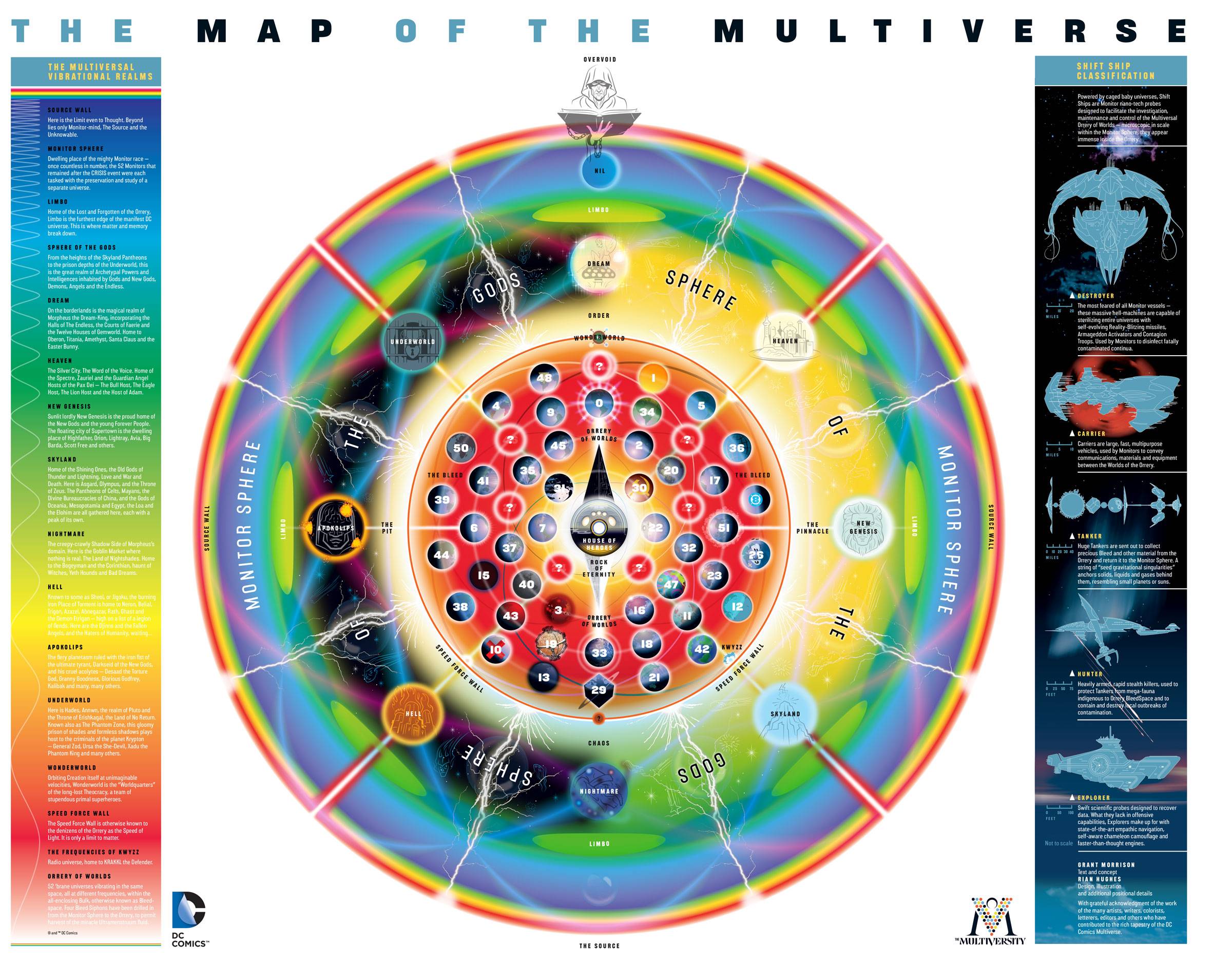 During Mark Waid's era- the inventor of the Speed Force in fiction- the Force was an extra-dimensional energy used to justify everything Speedsters did. When he first developed the concept, the idea was that Flashes were like batteries and could and would eventually become pure energy beings... inspired by the idea that Barry would become the very bolt of lightning that began his career through Crisis.

This energy being concept became the idea of carrying the Speed Force in and with them where (and when) ever they went, since they literally WERE the Speed Force. Waid predicted this for Wally down the road: 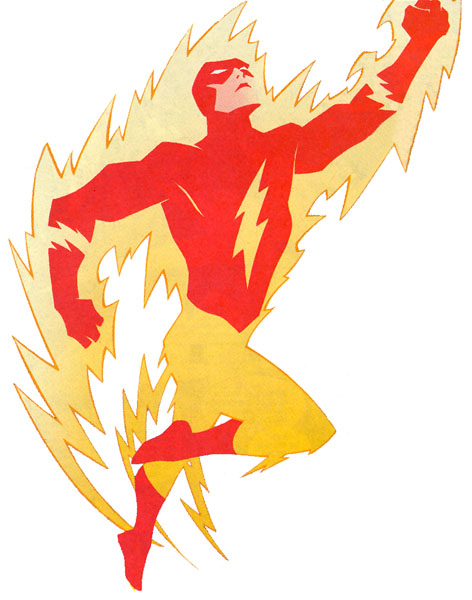 Then had Wally become this during normal continuity, until his romantic "lightning rod", Linda Park, brought him back to his senses and corporeal self. From that point on, Waid started to use romantic logic, quasi-mystical lens to interpret the Speed Force such that it was basically akin to THE Force from Star Wars ilk.

This conception has had the longest run with various writers having various takes on it. In some cross-overs, the Speed Force is inaccessible in other dimensions... but in other takes (like when Bart Allen briefly took over the role of The Flash) it was again something that could be bottled up and carried in a particular Flash never to be parted with.

Finally, Geoff Johns innovated on the Speed Force with a nonsensical word-salad of technobabble explaining how Barry Allen is and will forever be the source of the Speed Force, generating it by using it. 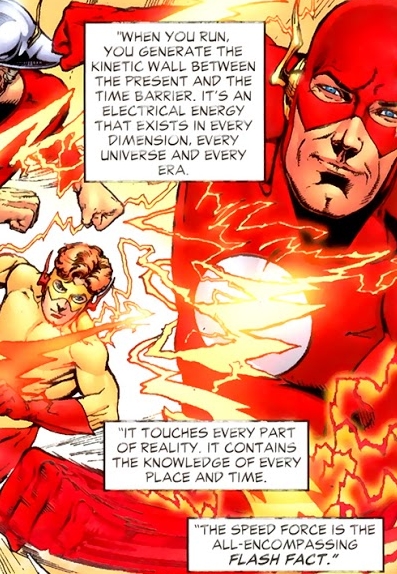 The goal was primarily rhetoric to justify Barry's return and Wally's demotion, but it also served to suggest Flash is inseparable from the Speed Force. Which, incidentally, aligns nicely with Barry's cameo in the Marvel Universe as "Buried Alien" wherein he still had his speed and trounced all-comers in a cosmic race.

In sum, your friend has an argument that Flash can be separated from the Speed Force- and thus his powers- based on the venue of the race; but there are many counter-examples to the contrary allowing Flash to maintain his speed across universes and continuities, which use a different reasoning for access-to or carrying-of the power (be it always accessible, or carried within, or becoming it, or generating it). Given the variety of treatments, no one interpretation should be dispositive.

Not the answer you're looking for? Browse other questions tagged dc powers the-flash crossovers or ask your own question.

23
Why are speedsters not prominent in Marvel?
22
What is Barry Allen's aka The Flash's top speed?
1
Can a speedster move fast enough in a room to be unnoticed by people in it?
10
First instance in the comics of The Flash's trailing lightning as literal rather than a visual effect?
97
Has an injured Flash ever used super-speed to walk on his hands?
1
How fast is The Flash when he's outside the Speed Force?
1
Does the Flash have super strength?
2
Why do some speedsters have glowing red eyes?
2
What Is The Fastest We Have Seen Wally West Travel?