The Queen propped her up against a tree, and said kindly, 'You may rest a little now.' Alice looked round her in great surprise. 'Why, I do believe we've been under this tree the whole time! Everything's just as it was!' 'Of course it is,' said the Queen, 'what would you have it?' 'Well, in OUR country,' said Alice, still panting a little, 'you'd generally get to somewhere else—if you ran very fast for a long time, as we've been doing.' 'A slow sort of country!' said the Queen. 'Now, HERE, you see, it takes all the running YOU can do, to keep in the same place. If you want to get somewhere else, you must run at least twice as fast as that!' 'I'd rather not try, please!' said Alice. 'I'm quite content to stay here—only I AM so hot and thirsty!' 'I know what YOU'D like!' the Queen said good-naturedly, taking a little box out of her pocket. 'Have a biscuit?'

For worldbuilding reasons, I am trying to understand the way Red Queen's country functions

The Red Queen said you need to run just to be in the same place, and need to go 2x fast to be able to move to somewhere else

The Red Queen's Country is Looking Glass World - the opposite of our world; where everything is backward and topsy-turvy. When Alice is in the flower garden earlier, she tries to make for the hill but never reaches it, until she is told that she must deliberately head away from the hill in order to reach it.

Carroll is writing nonsense, where all the expectations of the reader are subverted, and everything exists in a dreamlike state with appropriate dream logic (or lack thereof.)

We also only have the Red Queen's word for it and she is whimsical, unreliable, contrary and perverse - see her offering Alice a salty biscuit to quench her thirst.

Also, the world is a chess board. The Red Queen is constantly rushing about - moving in every direction and with unlimited reach - like the chess piece. Conversely, other characters move or do not move as their chess pieces would. The Kings remain near-stationary, the Knight moves strangely (His Anglo-Saxon attitudes*) and Alice (a pawn) moves from one situation at a time - except on her first introduction where she leaps a space on the train - like a pawn can move two spaces in its first move.

Question 1 - Nothing will happen. The Queen moves differently to Alice, but Alice tends to abide by her own rules when not specifically experiencing something odd.

Question 2 - Time and Distance function as a nonsensical narrative description of a game of chess, from the viewpoint of a pawn.

There is a frontispiece in some of the copies of Alice in Wonderland which describe the moves made in the particular chess game, which you might find useful. 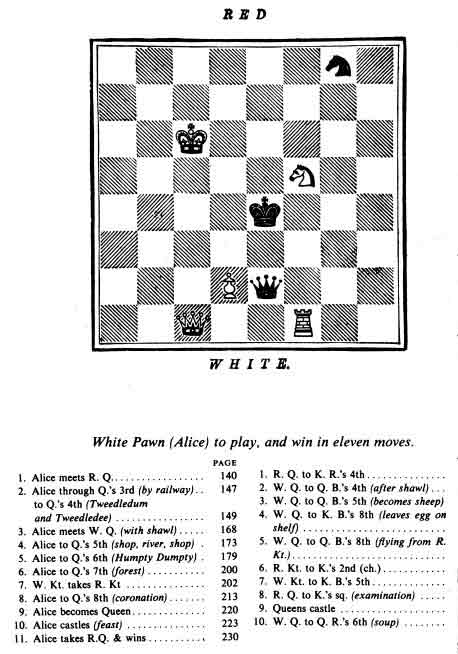 *A pun on the double meaning of attitudes, and a title of a history book at the time.

Many strange things are going on in this particular episode of Looking-Glass, and one of them is likely that Alice and the Queen are rotating around a point, likely around a vertical axis found at the Red Queen’s toe. (Please have a look at the illustration of this episode). This is analogous to what is taking place in the vanishing Cheshire Cat episode of Wonderland, where Alice can walk around her axis as long as she pleases and will never get somewhere. It must be remembered that in Wonderland the Cat gives Alice the following directions:

Notice should be taken that the Cat is waving his paws “round,” and if Alice follows these directions the Cat is bound to vanish and reappear on the branch as Alice turns.

Later in Chapter 5 of Looking-Glass - Wool and Water - Alice tells the White Queen that she wants to look all around the shop and the Queen states “Are you a child or a teetotum.” In Carroll’s mind, Alice seems to be both. In all three episodes mentioned, Carroll uses the word “giddy” (very close to our modern “dizzy”) to describe Alice’s post-rotation state, while in Wool and Water it is the Queen who complains that Alice, through her turning,is making her “giddy.”

In Wonderland we can see that after Alice had “walked on in the direction in which the March Hare was said to live.” her overall position had not changed in terms of space: she is exactly where she was before she “walked on”. (For this compare the two pictures of the Cat on the branches). In Wool and Water, after Alice and the Red Queen stop their rotational “run”

Poor Looking-Glass Alice, she may still be rotating under the original Wonderland tree!

Not the answer you're looking for? Browse other questions tagged alice-in-wonderland lewis-carroll through-the-looking-glass or ask your own question.

18
the chess game in Through the Looking Glass