Do we ever see The Thing's original form?

In The Thing and the other The Thing, we see it in a variety of shapes and sizes, but do we have any idea of its natural or original form?

Maybe it doesn't have one, maybe its form is based on whatever it can absorb or replicate. I always assumed that spaceship they find actually belonged to another species that was infected with The Thing and crash landed on Earth. 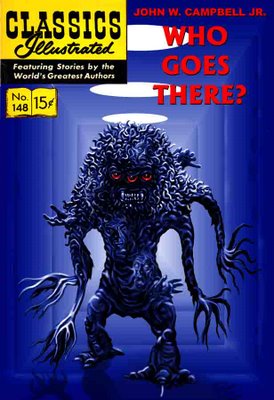 In the original short story, Who Goes There?, this issue is brought up briefly.

"I wonder if we ever saw its natural form." Blair looked at the covered mass. "It may have been imitating the beings that built that ship - but I don't think it was. I think that was its true form."

Given that Blair is correct about most things during this segment I'm inclined to say the author intended him to be correct. This "true form" is described at least twice.

"How the hell can these birds tell what they are voting on? They haven't seen those three red eyes, and that blue hair like crawling worms. Crawling - damn, it's crawling there in the ice right now!

And we actually see the creature afterwards...

The room stiffened abruptly. It was face up there on the plain, greasy planks of the table. The broken half of the bronze ice-ax was still buried in the queer skull. Three mad, hate-filled eyes blazed up with a living fire, bright as fresh-spilled blood, from a face ringed with writhing, loathsome nest of worms, blue, mobile worms that crawled where hair should grow -

No, we never see the Thing's "true form", if it has one. The director of The Thing (1982), John Carpenter, has said (in an interview which I can't seem to find at the moment) that he doesn't know what the Thing would naturally look like, if it had any "true form" to begin with. His producer, Stuart Cohen, has reinforced Carpenter's assertion that little or no thought was given to the Thing's origins, but he also speculated that the closest they came to revealing the Thing's "true form" was in the original concept art for the Blair-Thing. Due to technical problems, as well as financial and time constraints, this concept art was never truly realized in the finished film.

Unlike Carpenter and Cohen, the team responsible for the 2011 prequel of the same name did give considerable thought to the Thing's backstory. Screenwriter Eric Heiserrer, director Matthijs Van Heijningen, and the special effects studio Amalgamated Dynamics, Inc, came up with an explanation of how the Thing came to find itself on Earth. An alien race, which the crew referred to as "Pilot Aliens", was flying through the Galaxy collecting specimens of different alien species from various planets. They inadvertently collected a Thing, presumably hiding in the guise of a more innocuous species. At some point, the Thing escaped from its containment unit and quickly proceeded to assimilate every other creature on the spaceship, one by one. The last unassimilated survivor was the actual pilot of the ship, and he decided to crash the spacecraft in the hopes of destroying the Thing before it could spread to other planets. The pilot died in the crash, but the Thing survived, climbed from the wreckage, and buried itself in the ice, waiting for some sort of lifeform to find it, at which time it could resume its process of assimilating everything it came across.

Stuart Cohen, producer of the 1982 film:

Q: Was there an idea as to the Thing's origins?

A: No, not really. Endless discussions about this with writers before John came on as director, almost none thereafter – for the purposes of this story, it really does not matter – think of the creature as the ultimate distillation of the Howard Hawks [producer of the 1951 version, The Thing From Another World] credo – a character defined by its actions, doing what it has to to survive…

Q: Was the "original" form of the thing ever shown in the film? Were there any bits and pieces that were "thing-original"? Was the "true" form ever planned to make an appearance?

A: The closest thing to a true form would have been the originally envisioned Blair monster, with bits and pieces of its many assimilations (as well as a partial Nauls) – most of this was jettisoned because of time and money.1
- Outpost 31

1Mostly unused concept art and storyboards for Blair-Thing, which Cohen claims is the closest thing we would have seen to the Thing's "true form", if it had made it into the finished film. The concept art comes from the fansite Outpost 31; the scanned article pages with the storyboards are from a special issue of Cinemafantastique devoted to the film. 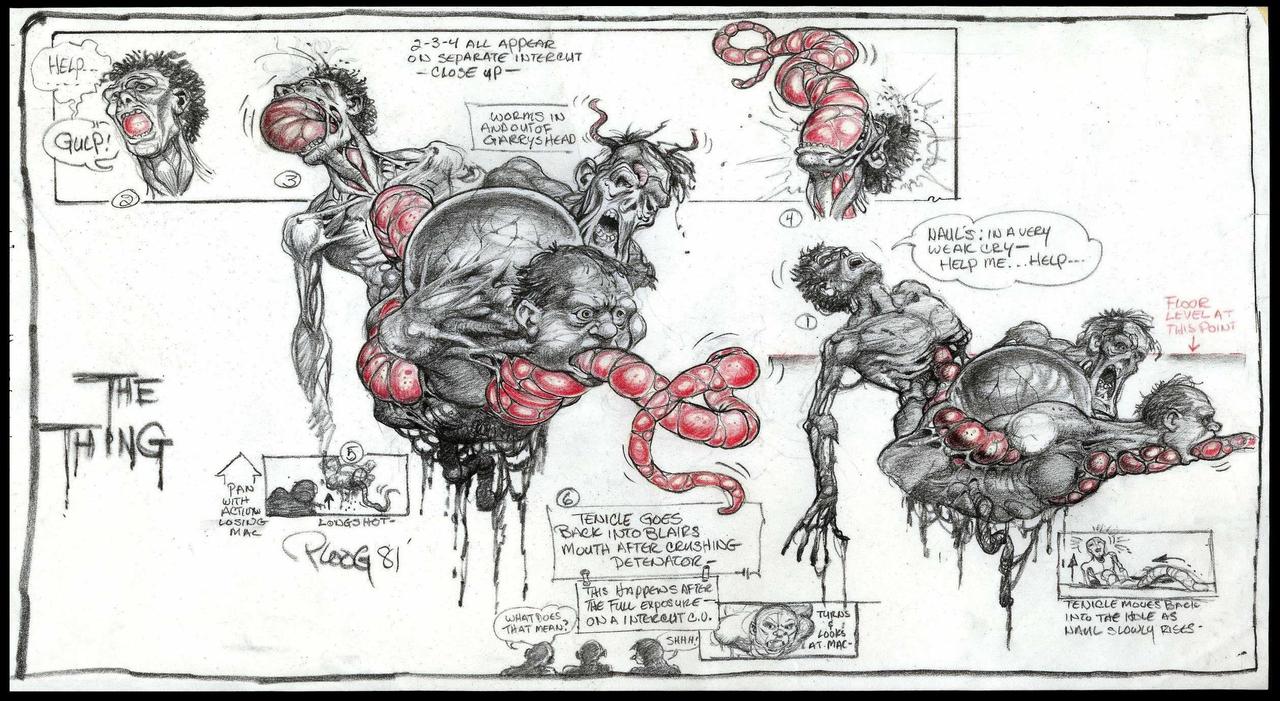 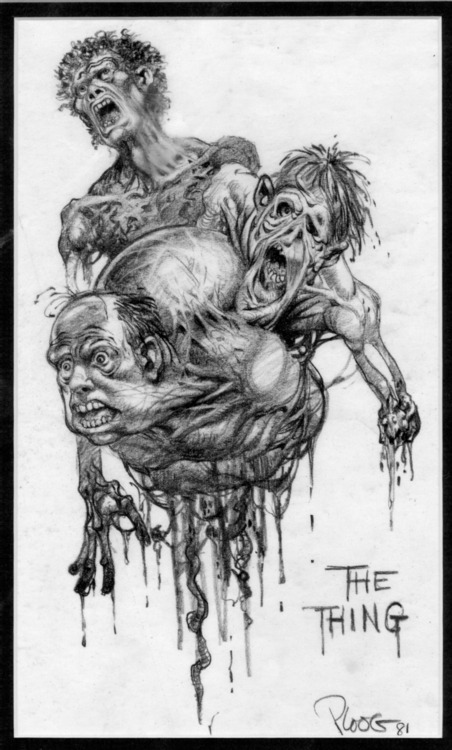 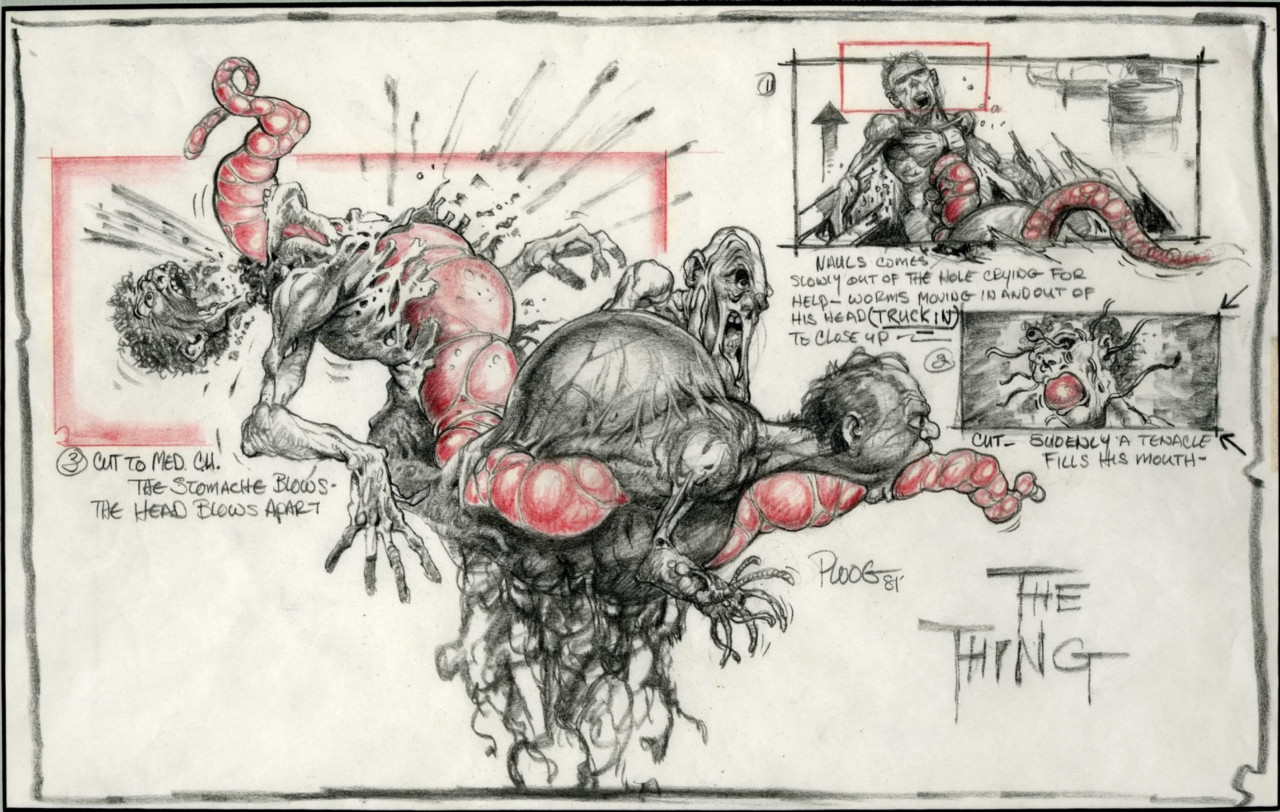 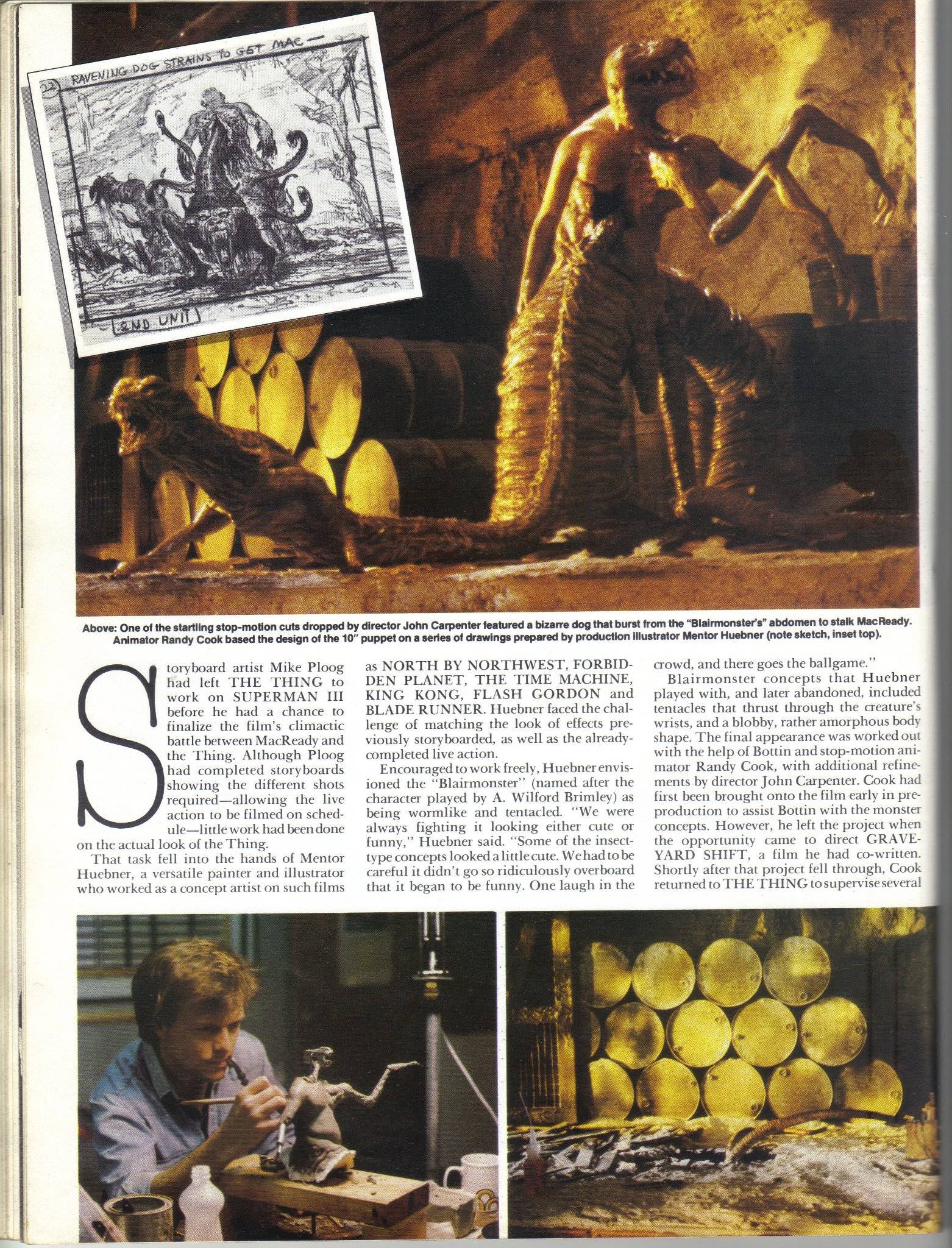 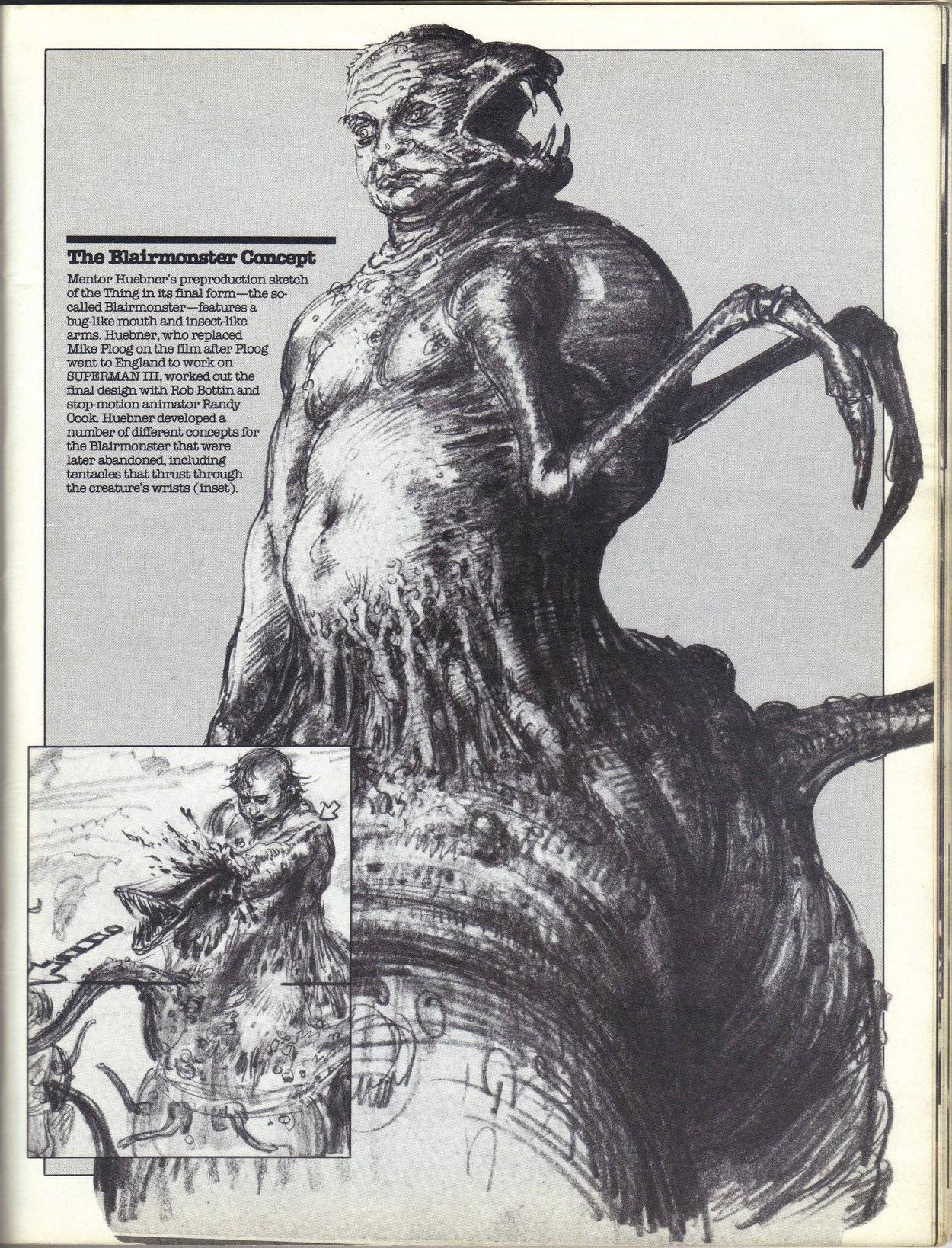 Description of the deleted ending of the 2011 prequel:

In the "Pilot Version", Kate walks in this room and sees a dead pilot hanging. He was the last pilot alive and Kate sees that he killed himself because his air pipe was cut (basically Colin in space). The back story was that this Alien pilot race collected specimens from different planets and The Thing was one of them, [but it] broke free and killed all the Alien species in the ship (pod room). I proposed to the studio a reshoot of a scene where Kate would wonder around in the ship and sees all the carnage caused by The Thing: an exterminated pilot alien race. The Thing, a specimen captured in a pod, broke free and killed the aliens on the ship. Or they killed each other not knowing who is who. The pilot in the pilot room kills himself and crashed the ship on Earth in the hope to stop The Thing. In the version I intended to shoot, the ship was steered by an Alien race and The Thing was a captive that broke free and killed everybody on board.

In [this] version, the pilot controlled the ship with tubes stuck in his back, operating the ship through those tubes. The pilot kills himself and crashes the ship on purpose, hoping that it would kill the Thing. Of course it doesn’t, it climbs out and freezes itself. So back to Kate. She sees the dead pilot and Sander, now has taken the form of the pilot (he has the genetics because of his spaceship slaughter fest 100.000 years before), has started up the ship. Sander attacks Kate in pilot form and corners Kate, who pulls her last grenade and threatens to blow them both up. That moment Carter runs in and sees what she is doing and blows up the sander Thing just to convince Kate that he is human. (he basically has no choice because he if fries Kate with his flamethrower everybody would blow up). Little complicated but we filmed this.”
(Quoted from the Facebook page of director Matthijs Van Heijningen)
- Thule Station

Tom Woodruff, Jr., and Alec Gillis, from Amalgamated Dynamics - the special effects studio responsible for the (mostly deleted) practical effects for the 2011 prequel:

Q: Can you tell us about the original scenes that were shot in the Alien ship. How did you feel about these scenes being rewritten and reshot and were you involved in these reshoots?

A: The footage featured the discovery of a fossilized Pilot hanging in repose (which you now see as a big cylinder of fractured lit pixels) and a surprise reveal that another Pilot is alive and has been infected by the Thing. It dislodges from its pilot seat and approaches Kate and Carter rescues her by setting it on fire with his flame-thrower. It's a disappointment to have something that's taken a lot of creative work from a lot of creative people eliminated. It hasn't happened to us a lot but it's part of the business. I was also disappointed to have done a big burn stunt, playing the Pilot, to provide fire elements for an intended CG version and not have it be of use. We designed the Sanders Thing that replaced the Pilot beats, but all of the replacement work happened in post without our involvement.
- Outpost 31

Below, we see some photos of Amalgamated Dynamics' sculpture of the Pilot Alien, from the deleted original ending to the 2011 prequel. Note that the Pilot Alien's appearance is loosely modeled on the description of the Thing in John W. Campbell's original novella, Who Goes There?, upon which all the 1982 movie and it's predecessor, the 1951 film The Thing From Another World, were based. Among other details, Amalgamated Dynamics made use of Campbell's description of the Thing having three red eyes. The first picture shows the fossilized Pilot Alien mentioned by Alec Gillis and Tom Woodruff in the last quote. The others show the Pilot-Thing. 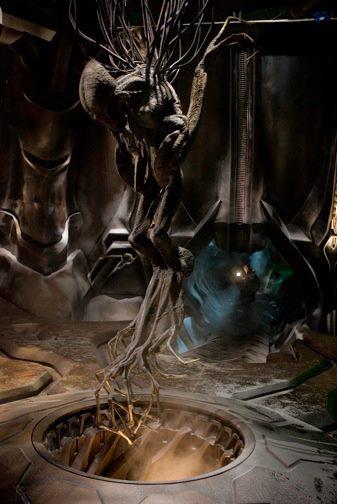 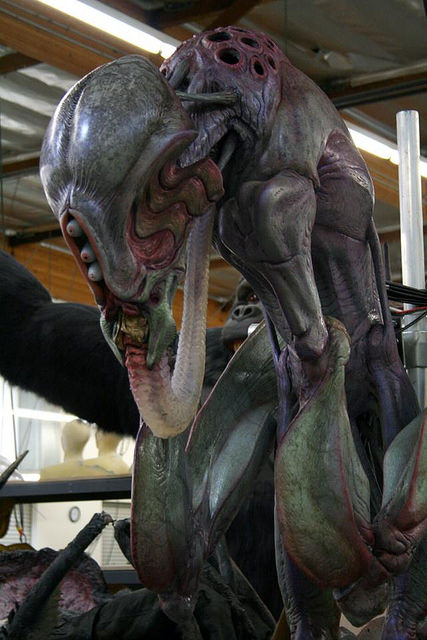 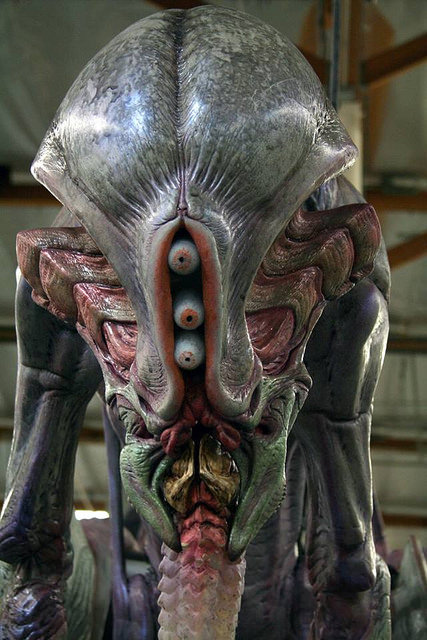 The Thing does indeed have a true form, even though It was only mentioned in the book "Who Goes There?" It is about 1.5 meters tall, with rubbery blue flesh and 4 arm like appendages ending in seven fingered hands. It's pulpy head has three gleaming red eyes and thick writhing tendrils. The only other thing known about the creature is that it prefers a temperature of around 50 degrees C and by the artificial light source it builds (also mentioned in the book), it can be concluded that it comes from a planet orbiting a Hot Blue star.

19
How did the Thing build a spaceship?
6
How is The Thing's memory stored, transferred and integrated?
10
Radio operator's throat in The Thing (1982) and The Thing (2011)
10
Was The Thing the pilot or a passenger on the space ship?
6
Does The Thing learn from its victims?
5
How did the dog-Thing know where to run when it fled the Norwegian base?
7
Would two assimilated humans in the Thing know each other is a Thing?
6
The Thing and its mimicry
3
Can the Thing infect non-living biomatter?