The original G1 Superion was made up of the five Aerialbots1: 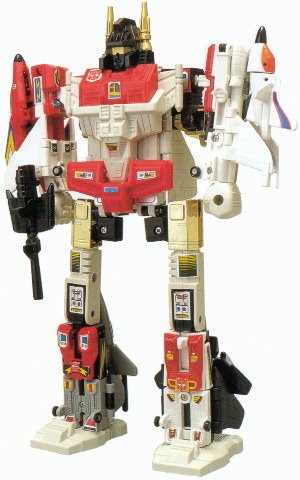 However, in the latest release from Hasbro, Combiner Wars2 Superion includes the Decepticon Dragstrip3 (in this image, the right arm): 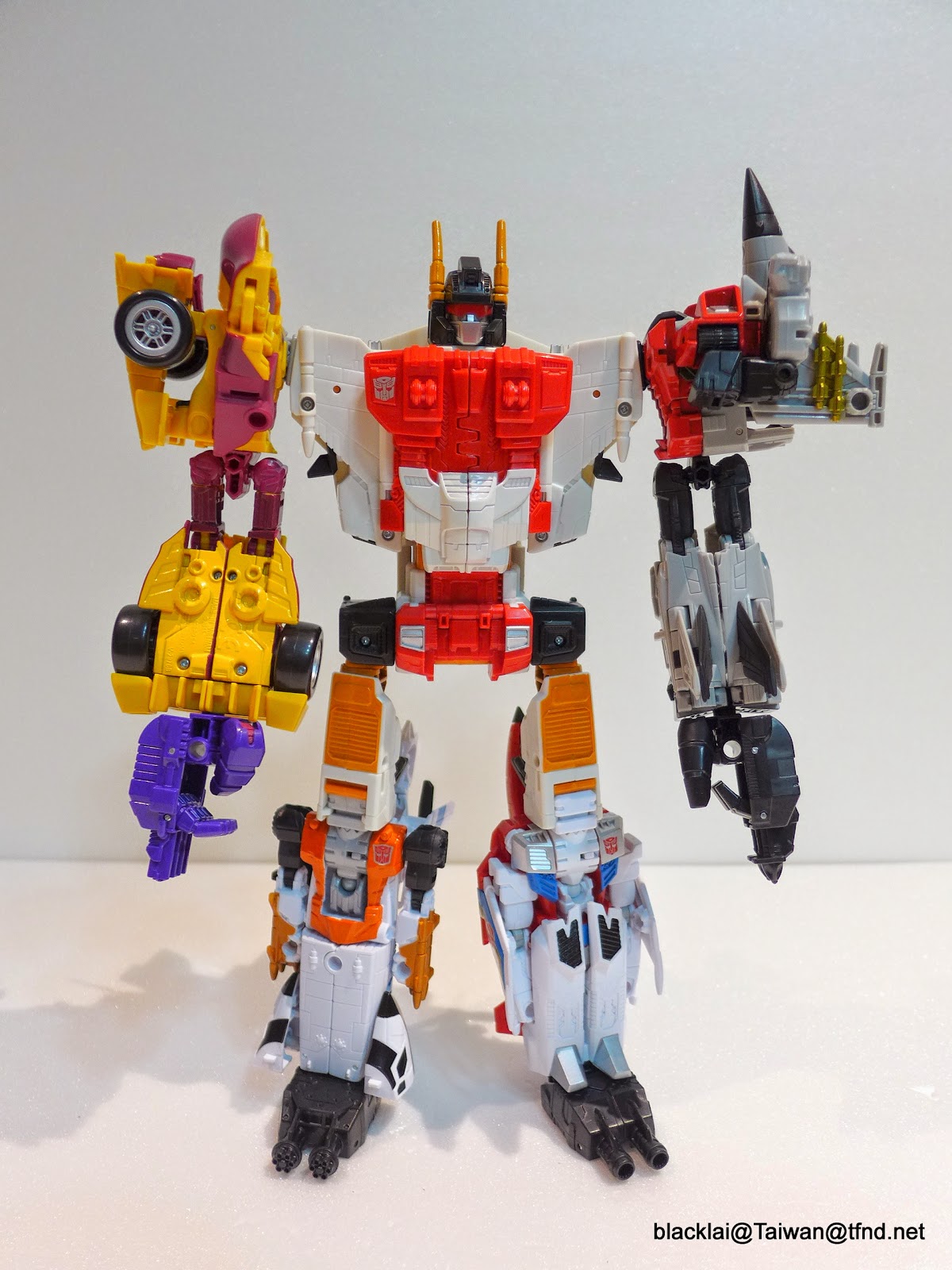 My question is: why did Hasbro originally include a Decepticon as part of the makeup? I cannot remember them previously mixing up a combiner with robots from different allegiances.

Was it a mistake4? Or some clever way to sell more toys? 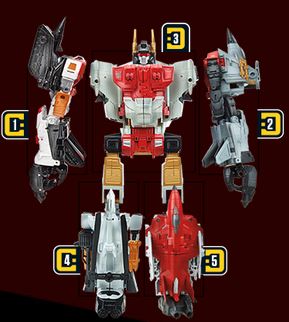 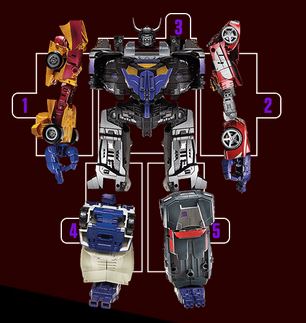 And it seems that the Superion and Menasor being sold at Amazon have been updated to sell the correct Transformers, implying it was a mistake.

Kotaku is the only site I've found offering some kind of (unsourced) explanation:

And finally add in the Decepticon Dragstrip, who's technically part of the Stunticon Combiner Menasor, but winds up puling [sic] cameo duty since Hasbro decided to release one wave with four Autobots and then reverse it later in the year.

This is an incomplete explanation - why would Hasbro only release four Autobots (Aerialbots) and one Decepticon?

Ideally I'm looking for a quote from Hasbro explaining this.

1 And therefore they are all Autobots.

2 Note, there are multiple Superion versions, some from Hasbro and some from other vendors. This is specifically about the latest (at time of writing) toy: Hasbro's Combiner Wars Superion.

3 Dragstrip is a Stunticon who makes up part of Menasor. He is therefore a Decepticon.

4 It could easily be a mistake. Eg another mistake is that the Hasbro site currently states: "allows six different bots to combine" whereas actually it is five.

This combination of four Aerialbots and Dragstrip was never actually sold as "Superion".

While Dragstrip was shipped alongside four Aerialbots in the first wave of Combiner Wars toys, and the art on the back of the packages showed Superion with Drag Strip combined as one arm, this was merely billed as a diagram of how the toys could be combined - not as a representation of the character Superion.

As seen below, each package only advertises this combined robot with a multilingual label suggesting that these toys can be combined - it does not provide any name for the combined robot in question: 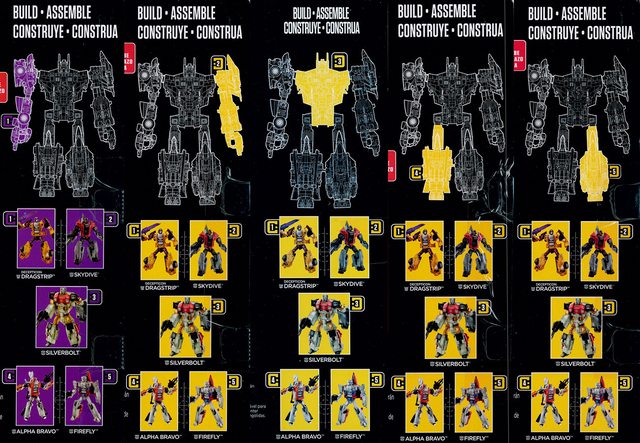 In the second wave of Combiner Wars toys, including one Aerialbot and four Stunticons, this was no longer the case - now, each figure had a diagram of the combined robot it is meant to be part of on the package, along with that robot's name.

As you can see, the one Aerialbot included in the second wave not only has "Superion" named on the package, but the diagram has also been modified to include that toy - Air Raid - in the correct position, instead of Dragstrip. Likewise, the diagram of Menasor does not include an Aerialbot. 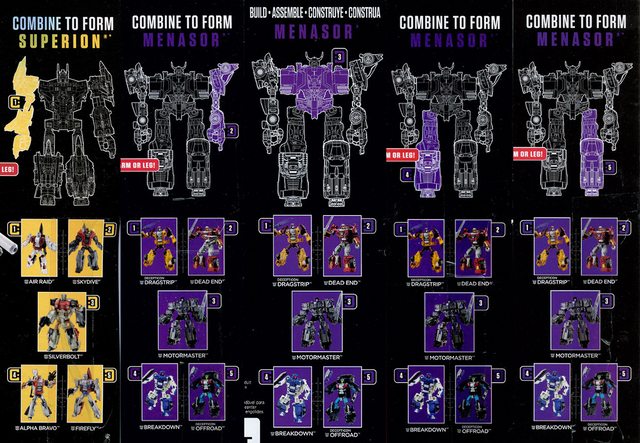 Likewise, when Quickslinger and Brake-Neck were released exclusively via web retailers, they also included the names and accurate diagrams as featured in the second wave of toys. 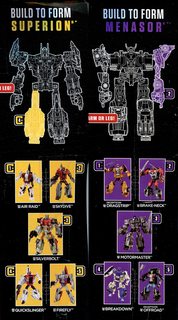 All future waves of toys in Combiner Wars included the four arm and leg components of each combined robot, shipping together, and the packages from each wave showed an accurate diagram of the combined robot along with its name.

From these facts, it seems evident that Dragstrip was never intended to be part of Superion. Rather, Hasbro merely communicated that the Dragstrip toy could be combined with the four Superion components that were currently available at the time.

(Of course, this leaves an underlying question - "Why was the Dragstrip toy shipped earlier than the other Stunticon toys, and why was Air Raid shipped later than the other Aerialbots toys?" - but that is clearly a matter of corporate logistics, as Hasbro distinctly avoided connecting it to the Transformers fiction as presented on the toy packaging.)

Not the answer you're looking for? Browse other questions tagged transformers toys or ask your own question.

10
Why was Snarl not in The Transformers: The Movie?
17
What is the difference between an Autobot and a Decepticon
6
Why can only the Triple Changers triple change?
9
Who designed the original Autobot and Decepticon logos?
10
Why is Starscream second-in-command of the Decepticons?
7
Why was this Onslaught toy sold as Red Skull?
2
Why didn't the Earth forces stop the Decepticons?
9
Why are the Decepticons and Autobots fighting?
4
Which of the original Kenner Star Wars vehicles were to the correct scale of the action figures?