I remember reading a short story some decades ago. I probably read it in the 80s, but it was almost certainly from earlier days, likely the 60s. The main thing I remember is that there was a spaceship powered by cheese (not sure if it was faster than light or not), and a crew consisting of a couple of goofball guys. I can't remember their names, unfortunately. There was a galaxy-wide war too, but that seemed to be something they happened upon, rather than being directly involved in it from the beginning.

It was intended to be humorous and I'd like to read it again, if anyone knows it. Thanks.

Are you referring to Star Smashers of the Galaxy Rangers? This is not a short story, but rather a 1973 novel by Harry Harrison. Other than the fact that it is a novel, Star Smashers fits what you're looking for, from the cheese-powered ship, to the war, to the humorous tone. 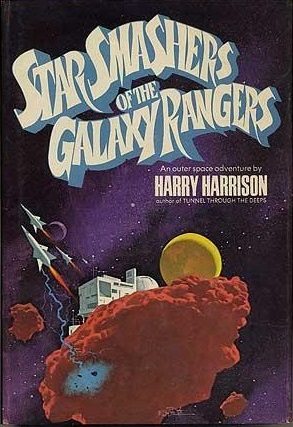 The novel revolves around two college science students who develop a faster-than-light drive powered by cheese ("Cheddite"). They eventually end up in the middle of an intergalactic war.

The wild, galaxy-hopping adventures of brash young scientists Jerry Courtenay and Chuck van Chider are at the core of this classic space opera. When the two college students develop a faster-than-light space drive in their homemade workshed, they decide to sneak it aboard their football team's airplane as a prank. The boyish plan backfires, however, and the boys find themselves, along with their crush Sally and the seemingly loveable school caretaker, Old John, hurtling through the solar system towards Titan — an icy moon of Saturn inhabited by hideous ice creatures. Titan and the 20th century are only square one as the foursome becomes embroiled in a vast, intergalactic, century-jumping battle.

From the novel's Wikipedia entry:

It is a parody of the space opera genre and in particular, the Lensman and Skylark series of E. E. "Doc" Smith. It also includes an homage to Larry Niven's Ringworld.

It is about two college students, Chuck van Chider and his friend Jerry Courtenay, who accidentally invent a device that can transport them through space, powered by a substance called "Cheddite", which is created by irradiating Cheddar cheese.

Note: In case you are curious, I found this book by searching for specific cheeses. ("Spaceship" combined with "cheese" wasn't pulling up anything that fit your description. However, "cheddar" did.)

Not the answer you're looking for? Browse other questions tagged story-identification short-stories food or ask your own question.

8
Short story similar to Under the Dome
5
Looking for a YA book about teenagers in space
9
Short story: Earth covered in germs after biological war, patriotic amoebas descended from humanity
10
A sci fi story about a man who becomes a machine then a ship then a god
7
Story about realm that contained Avalon and Tara and more
4
Sci-fi book about a genetically modified planet