How was the crew of the Ares 3 able to successfully get back to the Hermes?

In the first scene of "The Martian" a storm kicks up on the surface of Mars and the crew of the Ares 3 decide to abandon their mission and return to the Hermes. They quickly board the MAV and launch, somehow successfully getting back to the Hermes.

It's established later that the MAV are suborbital craft, and aren't intended to reach orbit (at least not without heavy modifications).

At-least within the context of the movie, we don't see the crew check on the position of the Hermes when they launch.

My question: What is the likelihood the Hermes is right where it needs to be to pick up the crew. Is there any science behind the crew being able to abandon the planet at a moment's notice and be able to make it back to the Hermes safely, or would the science conclude that they could only abandon the planet in a very small window of time, when the Hermes is in prefect position to retrieve the crew?

The MAV was an orbital craft...it would be nearly useless if it were not. The reason why it needs to be heavily modified, and why it DOESN'T achieve orbit (even though it could) is because it has to match the insanely fast velocity of the Hermes as it does a fly-by. A little orbital mechanics, and what happened to the MAV after the rendezvous was that it escaped Mars' gravity entirely and went into a long orbit around the sun. There's a slim chance it fell into the Sun, but making that happen is harder than you think.

Much of the hard science behind the Martian and in NASA thinking in general surrounding Mars comes from a book called The Case for Mars by Robert Zubrin. While it's a policy book, it's extremely engaging.

We are talking about nominal emergency planning here - an expedition besieged by li'l green men is forced to abort-to-orbit in the MAV. The MAV ascends into a Mars orbit, and then meets up with the Hermes. Mark Watney's case (a hyperbolic rendezvous with the Hermes in Martian fly-by) is much more scary since orbital mechanics won't give him another opportunity, and won't be discussed in this answer.

This boils down to several questions:

Then, depending on how much propellant the MAV has left for the rendezvous, a rendezvous scheme is executed.

TL;DR Remote control of the Hermes must allow for an abort-to-orbit in the MAV with the Hermes doing the "heavy lifting" of orbital plane change and subsequent rendezvous maneuvers. The problem is that VASIMR engines aren't powerful enough for this to be done quickly, so MAV life support reserves must be sufficient for let's say a week of watching movies and listening to the disco (I haven't run the numerical scenario, so this is just a ballpark estimate).

They didn't use the landing vehicle. They used the MAV (Mars Ascent Vehicle). Since this vehicle is specifically designed to launch from Mars and dock with Hermes it shouldn't have a problem doing that.

Keep in mind too that this vehicle was part of the mission abort protocol. Since using the MAV to connect with Hermes was the key to the capability of aborting a mission then NASA would have to make this work.

In addition, the Hermes can be remote controlled. At one point in the book, Mark mentions a scenario they trained for where the MAV's second stage fails to ignite, leaving the crew in a lower orbit than the Hermes'. Mission Control would simply alter the course of the Hermes to intercept their lower orbit to pick them up.

Due to the time delay I don't think Mission Control on Earth would make this correction. A more likely candidate would be Martinez controlling Hermes from the MAV (IMO). Regardless, the ability for Hermes to adjust position to dock with the MAV is there when needed.

Woops, that was my mistake, either way it's the same Vehicle Mark uses at the end of the movie. And is still limited to sub-orbit.

I haven't seen the movie yet. But I'll quote a paragraph from page 386 of the book:

Bruce slid the booklet across the desk to Venkat. "The problem is the intercept velocity. The MAV is designed to get to low Mars orbit, which only requires 4.1 kps. But the Hermes flyby will be at 5.8 kps."

The Hermes is moving 5.8 kilometers/sec when it flies by Mars, which is above Mars escape velocity.

The Hermes has ion engines. Great ISP but very low thrust. It would take too much time to put on the brakes enough to slow from a sun centered orbit to a Mars capture orbit. Thus the Hermes has to zoom by Mars a lot faster than the typical MAV rendezvous trajectory. So the MAV has to be adapted to match Hermes' 5.8 kilometer/second velocity.

Here's a quick pic (not to scale): 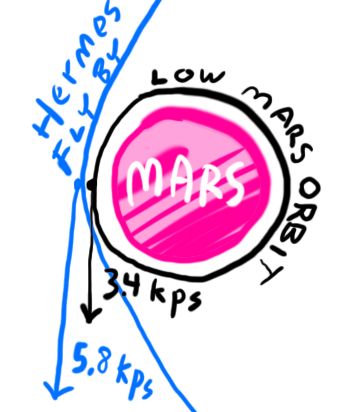 Low Mars Orbit is about 3.4 km/sec. Why does Bruce say 4.1? Not sure but maybe because the MAV would incur a gravity loss penalty during ascent.

Low thrust also means Hermes is slow to step on the gas. Neil DeGrasse Tyson's trailer for The Martian has Hermes departing from low earth orbit (1:15). At 2 millimeters/second^2 acceleration, it would take Hermes more than a month to spiral out of earth's gravity well. That wrecks Weir's 124 day trajectory from Earth to Mars. See Fact Checking Neil deGrasse Tyson.

I sure wish Tyson had Hermes depart from Earth Moon Lagrange 2 (EML2) instead of low earth orbit. Then Weir's trajectory would be plausible. And it would have been a great opportunity to give EML2 some attention. EML2 is a very interesting location.

Not the answer you're looking for? Browse other questions tagged the-martian orbital-mechanics or ask your own question.

20
Why didn't Hermes drop the supply probe on Mars?
12
How were the Ares III crew expected to get from Hermes to Earth?

13
How was MAV fuel plant able to make fuel using hydrogen so quickly in the end?
17
In Andy Weir's "The Martian", is the Ares 3 crew joking about having Johansen eat them?
3
How did that rendezvous between Hermes and the probe happen?
17
Why didn't the Ares III crew in the film "The Martian" simply wait out the storm in the habitat rather than aborting the mission?
7
How does Hermes get back to Earth?
12
How were the Ares III crew expected to get from Hermes to Earth?
44
In The Martian, how were the crew in the Hermes shielded from radiation?
11
When Watney used the Ares IV MAV to ascend, he pulled 12 G's. But the crew used the MAV from Ares III to ascend, how come they didn't pass out?
4
The Martian: How did they get there?