I read a book series a long time ago that I remember parts of, but I can't find via Google. It is in the late period of the Roman empire, after it has split in 2. The main character is from the Eastern half. He starts a a young man or youth, his family is powerful. He is exploring magic, and thinks that the entire empire is controlled by an ancient magic.

There's also a different guy who I think is Persian, who is a sorcerer who accidentally opens a door to another world, and uses power from there, but is also constantly holding it shut via magic from super powerful beings who want to destroy the world.

At one point, a woman who is with the Roman character thinks that he is becoming evil and stabs him in the head, but he's so powerful at that point that he stops his death, repairs the damage.

He finally takes control of the magic that is controlling the empire and basically takes over everything.

Just going off of key words, could it be The Shadow of Ararat by Thomas Harlan? 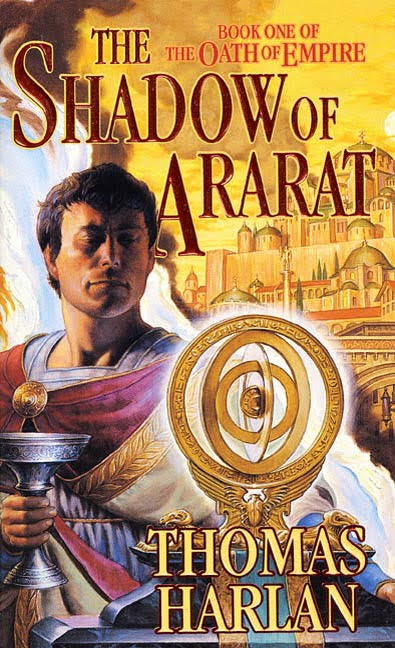 The Roman Empire has reached our 7th century without falling or becoming Christian. Galen Atreus, Emperor of the West, and Heraclius, Emperor of the East, join forces to overthrow Chroseos II, Emperor of Persia. The book follows four major characters. Dwyrin MacDonald, a young Irishman learning sorcery, is prematurely initiated and sent to fight with the Roman army, though he can barely control his gift for calling fire. The Roman Thyatis Julia Clodia, a covert warfare specialist, leads her unit behind enemy lines. Ahmet, an Egyptian priest/sorcerer at Dwyrin's school, sets out to rescue Dwyrin but meets Mohammed (yes, that Mohammed). They join Roman allies Nabatea and Palmyra, desert cities facing superior Persian forces without Roman aid. Finally, Maxian Atreus, Galen's youngest brother, a healer-magician, discovers a "curse" protecting the State from inimical magic but also preventing nonmagical progress. He sets out to lift it at any cost, resurrecting canny Julius Caesar and searching for Alexander the Great--an even greater source of magical power.

8
Story where radically different cultures live together and are defined by rulesets, some choose not to see each other, a house is used as a spaceship
4
Fantasy series with black, white, red magic and magic mirrors
13
Identify a story about a teen boy who learns to use magic with his lizard companion
31
Book or series with 7 layers of worlds, where each layer's inhabitants are like gods to the layer below
10
Book about a castle full of portals to other dimensions, everyone there has some magic