Why didn't the costume designer know the purpose of Zoe's necklace?

In the DVD commentary for the episode "Shindig," costume designer Shawna Trpcic mentions that the leather necklace Zoë always wears is a symbol of her marriage bond. However, she is seen wearing the necklace in the flashback sequences of "Out of Gas," well before she has married Wash.

Thanks Richard: "In the book Firefly: The Official Companion - Vol. 1, Torres speculates that the necklace is actually a shoelace from the boots that Zoë wore during the Unification War."

I guess I'm just confused why the costume designer wouldn't know what the purpose of part of the costume was. Shouldn't she have known? 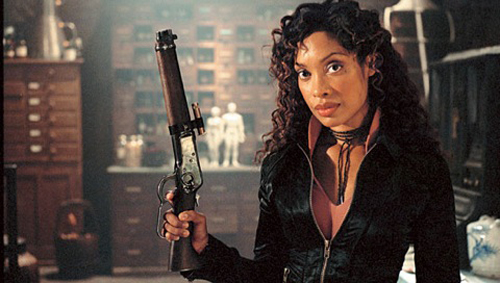 Disconnection between the costume designer, what made it to screen, and what the actors thought of their attire. It may very well have been her intention that the necklace be a tangible, and cheap, symbol of the bond between her and Wash.

Since it appeared in the Out of Gas flashback, her intentions were thwarted. This isn't the first costume controversy either; consider the extensive debate of the proper orientation of the Independents Flag, and the associated shoulder patch of the Independents soldiers.

17
Why don't the outer planets have advanced technology?
27
Why did the alliance show respect to Shepherd Book, in spite of his past?
14
Why weren't the Hands-of-Blue affected by their own weapon?
30
Why does Jayne remain loyal to the crew?
33
Why does Mal abandon the Tams in “Safe”?
19
Why doesn't Captain Mal let Saffron answer at the end of "Our Mrs. Reynolds"?
40
Why didn't the Reavers murder and mutilate everyone on Miranda?
22
Why didn't the Alliance destroy The Reavers?
19
How did the hill folk in Safe know Simon's profession?
16
Why did the Hands of Blue use a "sonic device" to kill people?