A long time ago I read a book where some sort of nanites or something similar (perhaps a biological computer virus) infect people and make them smarter/faster/better.

I only remember a few scenes. There was one scene where a family was in a car and then there was an impending car crash - the family kids (that had previously been infected) saved everyone by pulling on the hand brake and turning the wheel while the adult driver screamed and panicked. Near the end of the book the main protagonist that had been fighting the nanites the entire time finally gave in and let them take over his mind/body.

I think I read this in the late 80s or early 90s, though it may have been more recent. I'm not even sure what to search for since nanite wasn't a word used often, if at all, back then.

Human Error by Paul Preuss, Tor 1985, ISBN 0 812 54987 2, involves infection of humans by viruses engineered to solve problems on computer chips (matching what you mention about them possibly being computer viruses in a very literal sense). 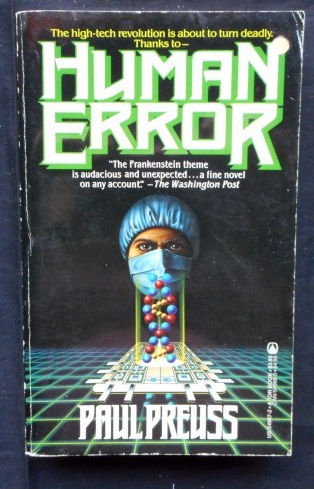 This review mentions "a narrowly avoided car accident" and mentions that acceptance of the viruses leads to a "Golden Age" for humanity.

from the Amazon link:

Ancient diseases encoded in the DNA of humans wait like sleeping dragons to wake and infect again--or so molecular biologist Kaye Lang believes. And now it looks as if her controversial theory is in fact chilling reality. For Christopher Dicken, a "virus hunter" at the Epidemic Intelligence Service, has pursued an elusive flu-like disease that strikes down expectant mothers and their offspring. Then a major discovery high in the Alps --the preserved bodies of a prehistoric family--reveals a shocking link: something that has slept in our genes for millions of years is waking up.

I suspect you may be combining both books in your memory. There's a crash scene in Darwin's Children which seems to imply that one of the enhanced children tried to prevent it, but it doesn't quite match up with your description. The first book ends with the parents of the first advanced children coming to terms with the changes that have happened.

“We’re different, too,” Mitch observed.
“You both look fine, even stylish,” Maria said. “It’s going to be all the rage once the fashion magazines see you. Petite, beautiful Kaye …”
“Rugged, handsome Mitch,” Eileen said.
“With squid cheeks,” Kaye finished for them. They laughed, and Stella jerked in her bassinet. Then she warbled, and again the room fell silent. She honored each of the guests in turn with a second, lingering look, her head wobbling as she tracked them around the room, coming full circle to Kaye and then jerking again as she saw Mitch. She smiled at Mitch. Mitch felt his cheeks flush, like warm water running beneath his skin. The last of the skin masks had fallen away eight days before, and looking at his daughter was something of an experience.
Oliver said, “Oh, my God.”
Maria stared at all three of them, her jaw open.
Stella Nova sent waves of fawn and gold over her cheeks, and her pupils dilated slightly, the muscles around her eyes and eyelids drawing the skin down in delicate and complex curves.
“She’s going to teach us how to talk,” Kaye said proudly.

Possibly "Prey" by Michael Crichton? Published Nov 2002 according to Wikipedia. Features nanobots that can "disappear" inside a human body and emerge at will. Great book, surprised it has not been made into a movie yet.