Why is Shepherd Book crushing a snake on the cover of Serenity: The Shepherd's Tale? 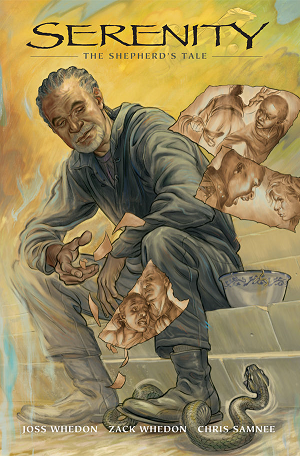 Have any of the writers or artists stated why Shepherd Book is stepping on a snake on the cover of Serenity: The Shepherd's Tale? There is no snake in the graphic novel. Is it a allusion to Book overcoming adversity? It may be a reference to this Bible passage, but I doubt is as it doesn't really connect to the story:

14 So the Lord God said to the serpent, “Because you have done this, “Cursed are you above all livestock and all wild animals! You will crawl on your belly and you will eat dust all the days of your life. 15 And I will put enmity between you and the woman, and between your offspring and hers; he will crush your head, and you will strike his heel.”

Jesus or Mary crushing a snake with his/her foot is a fairly common theme in religious illustration in Western art. The snake generally represents evil, Satan, or people who talk at the theater.

In-universe, Shepherd doesn't overtly belong to any specific Christian denomination; nevertheless, he is clearly Christian. And he is a good guy. My guess is that the snake is a nod on the illustrator's part to those two things. That way there is no need to do stuff like include a cross or have Shepherd cheesily battle evil. And it pleases art history nerds (which illustrators often are themselves).

Probably a reference to Exodus 4:1-5:

4 Then Moses answered and said, “But suppose they will not believe me or listen to my voice; suppose they say, ‘The Lord has not appeared to you.’”

Moses was a shepherd, remember?

It could also be a reference to St Patrick, who cast the snakes out of Ireland. https://en.wikipedia.org/wiki/Saint_Patrick#St._Patrick_banishes_all_snakes_from_Ireland

Of course this is just speculation.

Not the answer you're looking for? Browse other questions tagged comics firefly serenity cover-art symbols or ask your own question.

9
What Is Shepherd Book's Religion?