Back in 1992-1993 when I was a kid I saw an animated Fantasy TV series about some magical kingdom fighting some dark kingdom from another universe or something like that. I don't remember anything specific besides that the main protagonist was a prince of that kingdom and they had some weird 17-18 century french-like military red-white uniforms. I watched it in Russian DUB but I think original language of the series was either French or Polish or Czech or some other European country I remember that exactly. Also there was lot of horse riding scenes and battles and they've used muskets during battles. At some point the prince was captured by dark kingdom or went missing (I'm not sure exactly). Series were 40-60 episodes I think, each episode not longer than 30 minutes

Troydm found the series in question, posting as much in the comments, but has not posted an answer, so I'm putting one up so that we have an answer.

Hana no Ko Lunlun (花の子ルンルン) is a Magical Girl series from 1979 focusing on a theme of flowers.

Long ago, plant spirits and fairy-like creatures lived in harmony with mankind, but gradually humans began to rise toward greed and cruelty and the plant spirits immigrated to another world they dubbed the "Flower Star". However, their legacy remained in people who truly knew the meaning of love and kindness, and not to mention some plant spirits that still believed in humanity remained on Earth and married human people, thus leaving some blood descendants scattered around the world. A talking dog and cat pair, Nubo and Cato, are sent to Earth to find one such descendant to find the magical Flower of Seven Colors, the symbol of the Flowern Star's ruling family, so that a new ruler can ascend the throne.

In France they meet Lunlun, a young orphan who lives with her paternal grandparents who own a flower shop. She turns out to be a descendant of the Plant spirits from her mother's side, so on Lunlun's 15th birthday party, they ask her to join them, and she accepts. They travel all over Europe in search of the flower, helping people every step of the way, while being pursued by a bumbling pair of villains, the selfish fairy Togenishia and her servant Yabooki, who want to steal the flower and rule the Flowern Star. Lunlun is also aided by Serge, a mysterious photographer who gives the people Lunlun helps packets of flower seeds which symbolize the lesson they've learned in the "language of flowers." 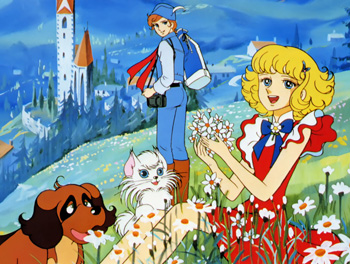 For the Russian dub, it was probably released as Лулу — ангел цветов or "Lulu - Angel Flower".

There were 50 episodes of 24 minutes in length and a 15 minute film, Hana no Ko Lunlun: Hello Cherry Garden.

9
Young adult fantasy series from the late 70s or 80's, published by 1988, 4 books total
10
Old animated sci-fi movie about a family traveling on a starship
17
Old animated film with bald blue people
18
Animated 70s/80s movie or series with haunting soundtrack and an egg shaped spaceship
7
Earlyish ‘90s PC Space War / Battle Game
2
Cartoon about 2 guys (one named Sam) and a girl
9
TV series about alchemist from the Middle Ages traveling 500 years into the future to find a powerful, ancient machine