Where are the other Spartans in the first Halo Trilogy?

In Halo CE, 2 and 3 (Also on ODST) we never got to see any other Spartans, but later on Halo 4 and 5 we see a lot of them. Where are they on the first trilogy?

By the time of the original trilogy, John-117 aka "The Master Chief" was one of only a handful of Spartan-II super-soldiers left in existence. Spartan-II involved taking children at a young age and combining genetic therapy, cybernetic/biological augmentation, and years of combat-level training. Only 33 subjects had survived the Spartan-II program, and the majority of those subjects were then killed during the Fall of Reach incident.

The Spartan-III program was considered a cheaper, faster alternative to its predecessor, kidnapping war orphans and rushing them through a streamlined augmentation process. As a side effect, however, the Spartan-III soldiers had nowhere near the toughness or combat proficiency of the Spartan-II's. This, in combination with their status as "disposable Spartan knock-offs" saw them die out fairly quickly. Some of the initial Spartan-III batches were also killed during the invasion of Reach, and the Spartan program was shut down for the time being. 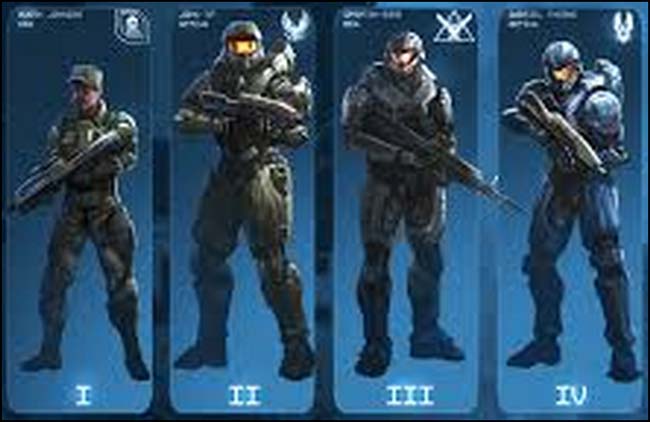 Years after Master Chief had already become a legend, the Spartan-IV program was started in an attempt to recreate the success of Spartan-II. The biggest difference is that Spartan-IV relies on volunteers from the existing military forces, which is why the new Spartans no longer required years to create and get into the field - the augmentations were done to adult subjects.

Most of the "other Spartans" you see in the more recent games are from the Spartan-IV program, started largely due to Master Chief's effectiveness.

From the novels Halo: Fall of Reach and Halo: First Strike, we know that some of the Spartan IIs were still alive when the Covenant started glassing Reach. They were deployed to the surface and to orbital stations to defend the planet. On the surface, they found Halsey and protected her as she discovered some Forerunner artifacts.

Halo: First Strike also explains that Linda, who was "killed" after Halo: Fall of Reach, was put on the Autumn when they jumped from Reach. She was supposedly ejected from the Autumn during the fight at the beginning of Halo: CE.

Kelly and the rest of Blue Team were on Reach, and eventually joined John-117 and Linda on their efforts to save Earth from the invading forces (Halo: First Strike).

The Spartan-IIs were still "in the universe", but they just weren't with John-117. They probably weren't also in Bungie's mind at the moment as well when they made Halo: CE

17
In Halo Reach, why is the AI carried in a large canister?
4
What happened to the other Forerunners?
6
Which books influenced the game Halo?
1
Where's the arbiter and the allied Elites after Halo 3?
6
Halo reading order: can I start with the Kilo-Five trilogy?
2
Who are all the dead marines in Halo: Reach and where did they come from?
3
Why are members of Fireteam Osiris different from previous spartans?
2
What were the Prophets hoping to accomplish by activating the Halo array?