At what Act and Part do the trolls come in?

I recently started watching Homestuck, and am all the way up to Act 4. I want to know how long it is until I get to the trolls. So my question is: at what Act and Part do the trolls come in?

homestuck trolls
Share
Improve this question
edited May 1, 2017 at 3:51

Technically, the trolls have already appeared.

If you've reached the start of Act 4, you just saw the first appearance of the trolls. The first troll to be introduced appeared at the end of the Midnight Crew intermission, just a few pages before the start of Act 4: 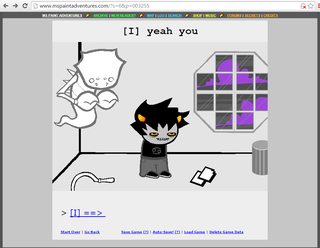 Besides that moment, the trolls have already been in communication with the four main protagonists for a long time. You've probably noticed them being referred to as "trolls" by the protagonists. Their instant messaging handles include carcinoGeneticist, apocalypseArisen, gallowsCalibrator, arachnidsGrip, etc. You'll see many more appearances of them in the chat logs as Act 4 goes on.

But I think the question you're really asking is "When do the trolls become the main protagonists?" The answer to that is simple: Act 5. From the first page of act 5, there's a troll-centric storyline that fills in their backstory. The troll storyline will then gradually link up and interwine with the human kids' story. But before then, you'll have a lot of interaction between the trolls and humans via chat logs. There's about six hundred pages to go between the start of act 4 and the start of act 5, so enjoy it!

Not the answer you're looking for? Browse other questions tagged homestuck trolls or ask your own question.

30
Are there multi-headed trolls in Middle-earth beyond The Hobbit reference?
7
Why does Gandalf advise the company to "be careful what you touch" in the troll hoard?
20
Why would Hermione send for help from the trolls?