So, I know that Star Wars Legends books are no longer considered canon (and the EU was a mess anyway). That said, I'm still hoping for more books from that side of the universe (Grand Admiral Thrawn, you're my only hope). Does anyone know if Disney will be allowing new books to be written under the Legends moniker for those that want to continue to explore that version of Star Wars?

New books will not be labeled Legends, but it is possible that material from Legends (such as Grand Admiral Thrawn) will be introduced into canon

"Legends" is a label used for past EU works:

New books would therefore not be considered Legends by definition.

Furthermore, all Star Wars creative development is under the supervision of the Lucasfilm Story Group, so Disney will not allow other authors to write new non-canon works:

Under Lucasfilm President Kathleen Kennedy’s direction, the company for the first time ever has formed a story group to oversee and coordinate all Star Wars creative development.

That said, Disney is not discarding the EU entirely. Authors may be allowed to bring Legends material into canon if the Lucasfilm Story Group approves it:

While the universe that readers knew is changing, it is not being discarded. Creators of new Star Wars entertainment have full access to the rich content of the Expanded Universe.

So it is possible that Disney will bring more Legends material into canon (indeed, Disney has introduced Grand Admrial Thrawn into canon). This canonized material would obviously not be able to contradict other canon, so elements of Legends which contradict with current canon are effectively a dead end.

Signs point to no.

From the press release regarding the new Disney vs Legends canon:

Now, with an exciting future filled with new cinematic installments of Star Wars, all aspects of Star Wars storytelling moving forward will be connected. Under Lucasfilm President Kathleen Kennedy’s direction, the company for the first time ever has formed a story group to oversee and coordinate all Star Wars creative development.

If they will all be connected, they cannot be part of the Legends continuity. Everything must be coordinated through Kathleen Kennedy's department.

Yes, in some circumstances (presumably, rare)

Although it was released after April 2014's creation of the Canon/Legends timeline and the established rule that any works released after that date are to be designated Canon, publisher becker&mayer! has confirmed that Imperial Handbook is branded as Star Wars Legends, meaning it is not part of the official Star Wars canon. 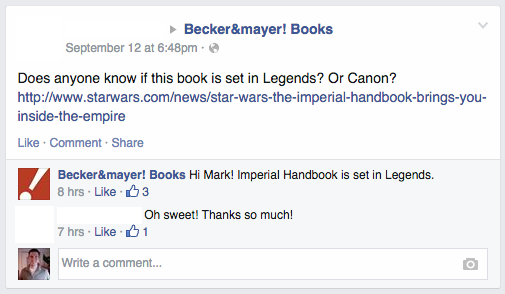 While new material released on or after April 25, 2014 is generally considered canon, a certain amount of new material has continued to be released under the Star Wars Legends brand. This has included such material as the concluding comics in the series Star Wars: Legacy Volume 2[5] and Star Wars: Imperial Handbook: A Commander's Guide.[6] New material has also continued to be released for the game Star Wars: The Old Republic, despite the game being considered part of the Legends continuity and, in fact, no canon material being released for the Old Republic era in which the title is set.

Not the answer you're looking for? Browse other questions tagged star-wars star-wars-legends canon or ask your own question.

18
Can content still be added to Star Wars Legends continuity?
8
What are the differences between the Canon character Thrawn and the one in Legends?
3
What is the location where stormtroopers are trained?

12
Did Disney officially call Legends/EU material "Not canon"?
37
What Star Wars Legends (EU) content has successfully become a part of Disney canon?
11
Are there any online projects, groups, etc. trying to continue the "Star Wars Legends" timeline?
8
What are the differences between the Canon character Thrawn and the one in Legends?
3
Given that Grand Admiral Thrawn was first seen in the LucasArts game 'Tie Fighter', is he canon?
5
Old Star Wars Legends book set after ROTJ
26
Is there anything wrong with Thrawn?