Why did Quark have different skin coloration around his eyes? 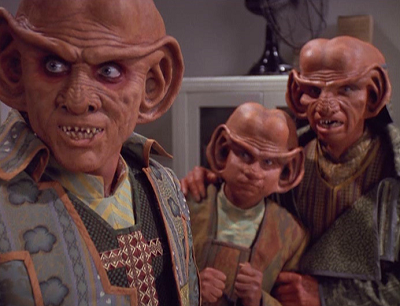 I'm curious if there's an in-universe reason for this, but I'm sure I could come up with something reasonable.

The more important question - what was the out-of-universe reason for Quark's extra eye makeup?

In the final episode, "What You Leave Behind", we have the following admission from Quark:

QUARK: They think they have it rough? They should try leading my life for a day. The hospitality industry isn't for the faint-hearted.

VIC: A bartender's life is a lonely one.

QUARK: That's true, but few people understand that. They think it's one big, happy party. They forget that the person giving the party never has any fun. He's too busy making sure everybody else is having fun. All I do all day long is give, give, give.

It seems that, as the manager of a very busy dining, gambling, and holo-entertainment establishment for more than a decade, Quark has lived a rather stressful life.

Combine this with having to manage the logistics of various interstellar business deals, and there is more than enough cause for lack of restful sleep and some subsequent dark rings around the eyes.

Out-of-universe, I suspect that the extra makeup is partly to support the in-universe perception of Quark as weary and more concerned with his business than with his health, and partly because it probably looked better on Armin Shimerman (Quark actor) than not having it.

According to the Deep Space Nine Companion, Armin Shimerman's facial prosthetic was constructed as the first episode, "Emissary", was being filmed and was not ready in time for Quark's scenes (and so they had to use Rom's nose on Quark's face). One could theorize that the extra eye makeup was initially applied to compensate for defects in the original prosthetic, and was perhaps retained because it enhanced rather than detracted from Quark's character.

Finally, Armin Shimerman himself has the following to say:

"Quark was much more challenging because of the make-up. It is very difficult to be an actor and work with something on your face. Very difficult because all you have is your face to work with. When it's covered up with rubber it leaves you only two things to work with and that's your eyes and your soul. And hopefully the soul comes out through the eyes."

In other words, Shimerman realizes the importance of conveying emotion with your eyes when your face is hindered by makeup, and so the extra makeup may have been part of a deliberate attempt to emphasize his eyes.

We probably can't say more than these speculations. Unfortunately, there doesn't seem to be a definitive statement from Michael Westmore, the lead makeup artist for DS9.

87
Why doesn't Quark wear a headdress?
11
Wouldn't a Star Trek mirror universe become unrecognisable within a few generations?
2
3rd and 4th plot in Shadowplay episode of ST:DS9
9
Is latinum a galactic currency?
36
Why doesn't Seven of Nine wear a Starfleet uniform?
17
Why does Brunt have it in for Quark?
5
Does Quark know that the "captain" is a member of the Q?
16
Under Ferengi law, is murder permitted if it is for the sake of profit?
7
Did this woman mean what I think she meant?
11
Can TNG-era warp drive be used to travel at sublight speeds?