How many Hobbit clans/families have 'feet' in their surnames?

How many hobbit clans or families include feet in their last names?

According to the movies, it seems like every other clan seems to have feet in their last name. Is this typical or is this just in the movies?

There are a few, but far from the majority:

But this is a pretty small percentage of the total Hobbit families; there are dozens of hobbit surnames given in Tolkien's writings.

Worth a mention are the Harfoots, though they're not, strictly speaking, either a family or a clan. The Harfoots were one of the original three "breeds" of hobbit:

Before the crossing of the mountains the Hobbits had already become divided into three somewhat different breeds: Harfoots, Stoors, and Fallohides. The Harfoots were browner of skin, smaller, and shorter, and they were beardless and bootless; their hands and feet were neat and nimble; and they preferred highlands and hillsides.

Only one of the above families is mentioned by name in the Lord of the Rings trilogy3: the Proudfoots:

Interestingly, Daddy Twofoot also appears in the film, in the Hobbiton montage that plays over Bilbo's opening narration. Although he isn't named in the film, he's identified in the film-licensed trading card game: 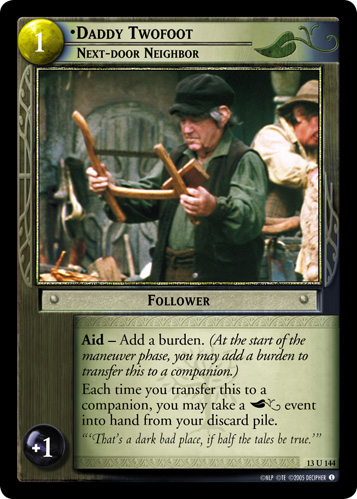 He also has a speaking role in the Extended Edition, in the Green Dragon pub, though I don't believe the role is credited.

1 The family tree was restored to the Appendices for the 50th anniversary edition of the book, along with the Boffin family tree

2 I'm very impressed if you can actually see this; I had to draw a simplified family tree and do a frankly embarrassing amount of arithmetic to get there. If you want to work it out for yourself, this YouTube video will be helpful

3 It's possible there are more references in The Hobbit movies, but I can't remember and I don't have copies of those scripts.

Not the answer you're looking for? Browse other questions tagged the-lord-of-the-rings tolkiens-legendarium the-hobbit names hobbits or ask your own question.

16
Can Sméagol's family tree be tracked all the way to the hobbit families at the time of Bilbo?
35
Was the original hobbit name of Bilbo and Frodo “Bilba” and “Froda”?
25
What is it about the Tooks?
10
What would Aragorn have done in the Hobbit movies?
16
Why didn't the Hobbits get frostbite?
11
If names are unique and family relationships are gone, why do Solarians have last names?
3
How did non Durin end up in the company of Thorin II Oakenshield
3
Do they have surnames in Stonewylde?
45
Why was Frodo “wise” and Samwise a “half-wit”?