What did Lucretia need rescued from (Girl Genius)

So I'm rereading the webcomic of Girl-Genius for another time and I'm at the train depot part of the storyline, and I wanted to ask a question.

What did Lucretia need rescued from in the following panel? Not the locket, but she is talking about a previous event where she was supposed to "win" and even if she didn't there were a number of candidate rescue opportunities. What was all that about? 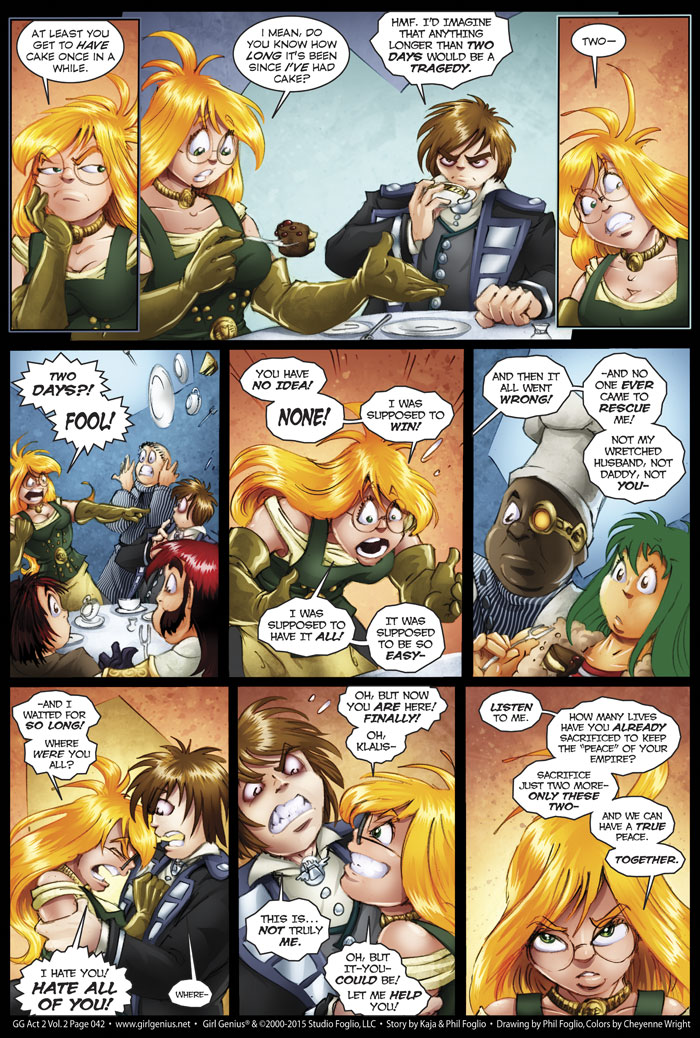 Lucretia, as the Other, was doing a marvelously successful job of conquering Europe with her slaver wasps; one presumes that's what was meant by "supposed to win". Maybe she even she believes she is still one of the good guys, whom she joined because the good guys always win.

Whatever happened to stop her, she vanished for eighteen years, until her machinations with the Knights of Jove and the Geisterdamen finally paid off and they managed to recall her into Agatha's body.

Presumably, she is rather displeased with her state of existence during that time, and at least partially blames her loved ones for not having come to her rescue.

Not the answer you're looking for? Browse other questions tagged girl-genius or ask your own question.

5
When the Jägers discover Agatha in Girl Genius, to whom is Jenka reporting?
3
How does the Girl-Genius web-comic relate to the Agatha H. books?
1
Are there fluff chapters in the Agatha H. books that are consistent with web-comic “excursions”?
2
Girl-Genius - who is Agatha's brother
3
Was the child textbook human or construct/superhuman in girl-genius
6
In Girl Genius, is it possible to slaver-wasp a Jägermonster?
4
Is the Dark O(ne) worshiped in Girl Genius?
1
What differentiates a “Spark” from a “Scientist” in girl-genius