What happens if you exceed 88 miles per hour?

Somewhat speculatively, because as said already - there is no canonical answer.

I'd backtrack a bit and ask - "Why does my time machine need to be in motion anyway?".

The most obvious would be that it's not really a time machine as such, as a hole punch - it makes a hole in spacetime that is a certain size. One of the limits is how long the 'hole' lasts.

We have the dimensions of the delorean as:

So I'd suggest your 'time jump' aperture only opens for that sort of time span, due to some metaphysical constraint, and therefore if you're not moving fast enough you'll get cut in half or otherwise mangled by the jump.

Logically therefore - what would happen if you were moving faster than 88mph and then activated the circuit - nothing much. You're moving more than fast enough to make it through the "hole".

Which leads to the question: what would happen if it hit 88 Mph on a rolling road?

Depends how close to the front of the vehicle the "aperture" opens. Would suggest it has to be in front, so it might actually not be too bad - it'll open, close, and you'll have burned up some expensive black market fissionables. Of course, if you've somehow 'gimmicked' the speedo so you're moving slower - but still forwards - then you'd be part way through a collapsing temporal rift. I cannot help but think 'That Would Be Bad'.

First of all, there seems to be no official in-universe explanation, as writer Bob Gale essentially picked the number with no in-universe reasoning in mind:

(See @Hypnosif's answer to another question, where I found this quote.)

Gale doesn't seem to have revisited the "88" since making that statement, nor has director Robert Zemeckis.

Also, we don't see the effects of faster-than-88-mph time circuit activation in the films.

Unfortunately, we may never know until they make a Back to the Future IV. ;-)

On a largely speculative basis, I would imagine that it depends on whether the time circuits are activated.

You drive at speeds higher than 88 miles per hour, just like you would in any other car. According to a report by Road & Track magazine, the top speed of the DeLorean was a measly 109 miles per hour, and reaching this speed required a staggering 40 seconds of driving on a perfectly straight highway. Even hitting 60 miles per hour took 10.5 seconds, which is truly pathetic for a vehicle marketed as a sports car. The movie was surprisingly close to reality, as it takes the DeLorean a full 19 seconds to reach 88 miles per hour in the test run.

The first part is obvious, as we see it happen more than once in the series. When you hit 88 miles per hour, you travel through time. However, as far as I can recall, every time the DeLorean arrives in a new time, the driver (whether that happens to be Marty, the Doc, or Biff) hits the brakes. I would imagine that, if the driver were to keep his foot on the gas pedal after arriving in the destination time, the DeLorean would simply continue to accelerate until it reached its maximum speed.

Speedometer uses two digital 7-segment displays to indicate current speed. When all segments light up… well, that could be an electronic trigger to start the time machine parts! 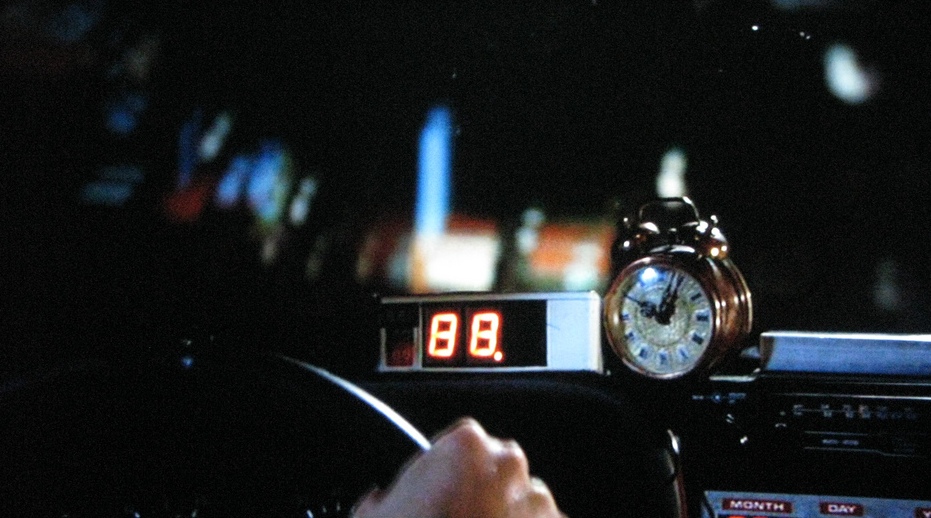 128
In Back to the Future, why was the speed 88 miles per hour?
66
Can the Delorean meet its speed requirement without moving?

128
In Back to the Future, why was the speed 88 miles per hour?
14
Is the DeLorean in "Back to the Future" able to determine the present time?
66
Can the Delorean meet its speed requirement without moving?
5
Why did the Doc decide to use a train?
3
Back To The Future: moving in time but not in space?
11
Why does Marty keep driving round and round the car park?