In Back to the Future, Marty famously frightens his father into action in 1955 by pretending to be Darth Vader from the planet Vulcan:

Presumably, Star Trek and Star Wars had their respective debuts in 1966 and 1977 in-universe, in the timeline that led up to the unaltered 1985. (Although, it is possible that his universe had neither franchise and he just made up the names on the spot.)

Upon returning to 1985, we see that George has written a novel, A Match Made in Space, with Marty's "Darth Vader" on the cover: 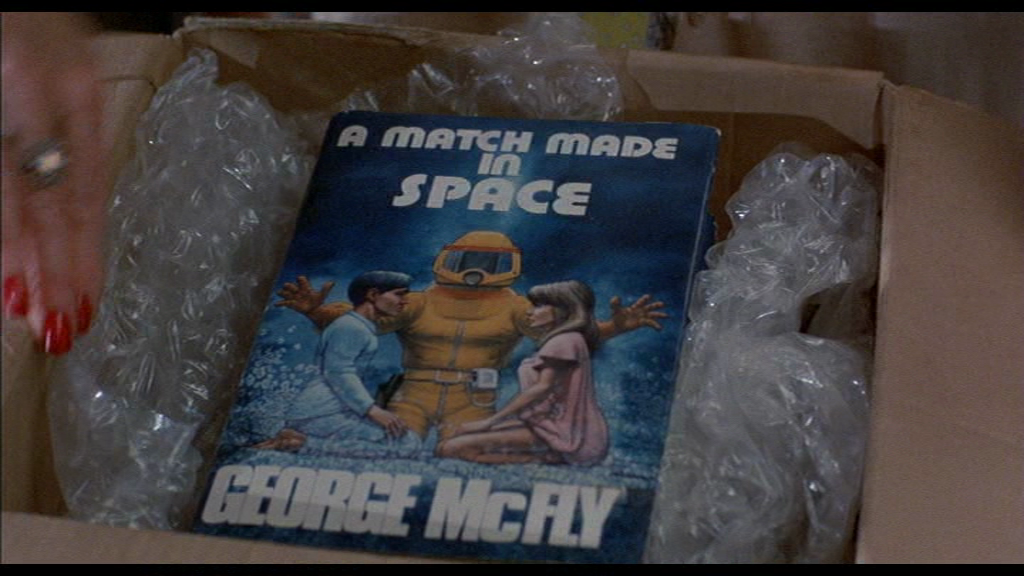 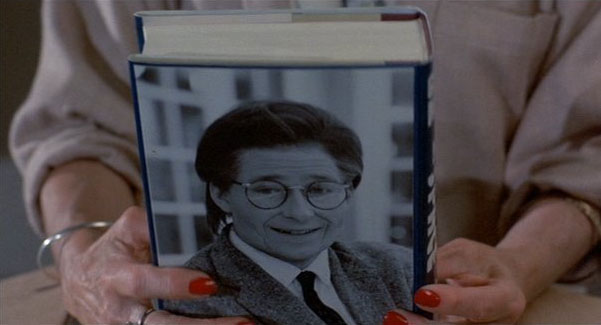 In Back to the Future II, we learn that A Match Made in Space was successful enough to be turned into a film.

Was the yellow-clad alien in George's book named Darth Vader, and was there a Star Wars Darth Vader in that particular timeline?

The book A Match Made in Space is introduced in the movie with this dialogue:

Since Biff describes it as George's new book, this implies its publication date was 1985. And since it was his first novel, George wouldn't have written any previous novels featuring these characters (and I know of no evidence about whether he actually called the character "Darth Vader" in the novel). I suppose this doesn't rule out the idea he introduced a character named Darth Vader in a short story prior to 1977, or that Marty's trip to 1955 changed the timeline enough that no Star Wars movies featuring Darth Vader ever got made, but we can at least say that if Star Wars did exist in the altered 1985, George Lucas hadn't gotten the idea for a character by that name from a novel by George McFly.

Also, in general the effects of most changes to the timeline in BTTF tend to be fairly logical and linear--most changes only affect the lives of the characters whose life history was changed without affecting the outside world, and the only large change to the outside world (Biff becoming rich and powerful) has a straightforward explanation (the sports almanac). We don't see examples of any butterfly effects where seemingly unimportant changes can have huge and unpredictable effects on the history of the outside world. Writers Bob Gale and Robert Zemeckis comment on something related to this in question 1.19 in the Official BTTF FAQ, discussing why Doc Brown learning about the future in 1955 didn't change 1985 too much:

There's a theory (we like to call it the "Self-Preservation Instinct of the Space-Time Continuum Theory") that says that the continuum is always trying to keep itself "on course," and when things happen to change it, it always tries to correct itself. It is much like a river, which tries to keep its overall course. Although earthquakes, fallen trees, floods, or other circumstances might disrupt it at points, the river would cut a new channel so that it would end up back at the same place. Thus, the overall physics (or metaphysics) of the space-time continuum would insure that any of Doc's memories of events that might create paradoxes would become hazy — or be erased.

So, this combined with the fact that we don't see random butterfly effects would probably suggest that if Star Wars existed in the original timeline (as evidenced by Marty calling himself Darth Vader), this little tweak to his father's timeline probably didn't have any cascading effects that caused Star Wars not to exist in the altered version of 1985.

According to the USA Today newspaper based off of the one from Back to the Future: Part II, the character is named "Garth D'Vade." 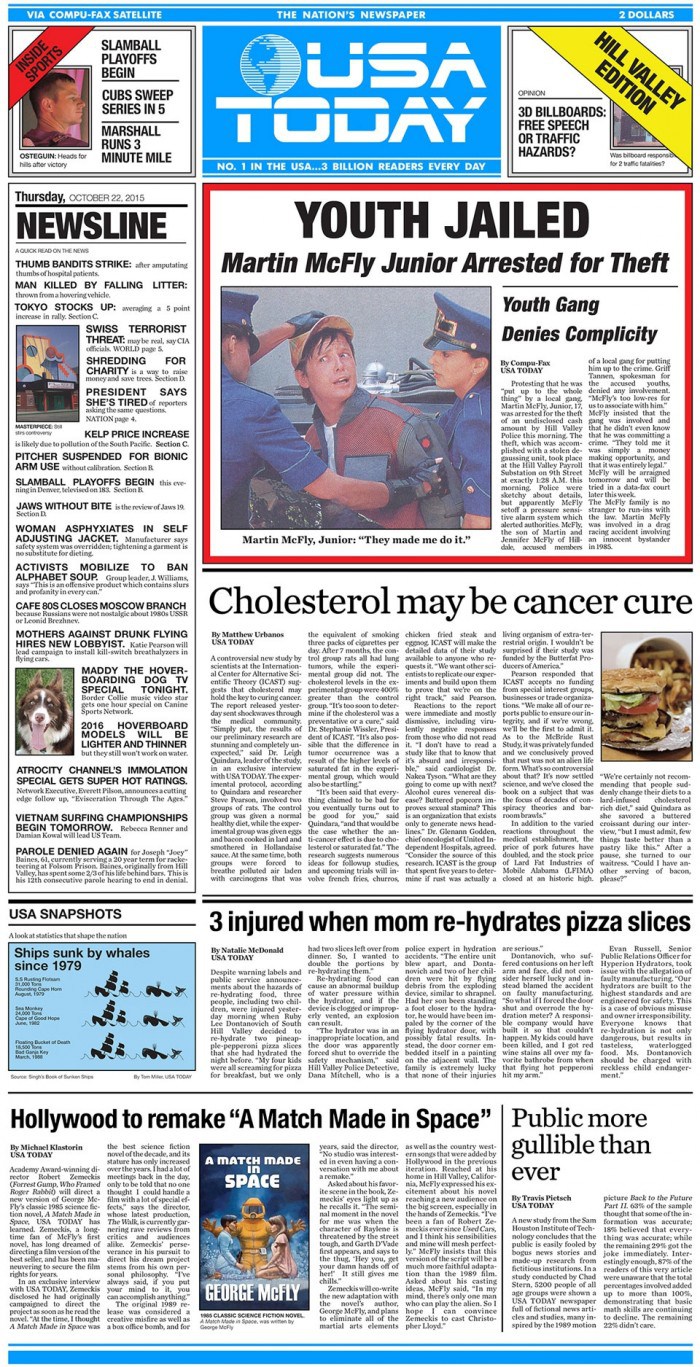 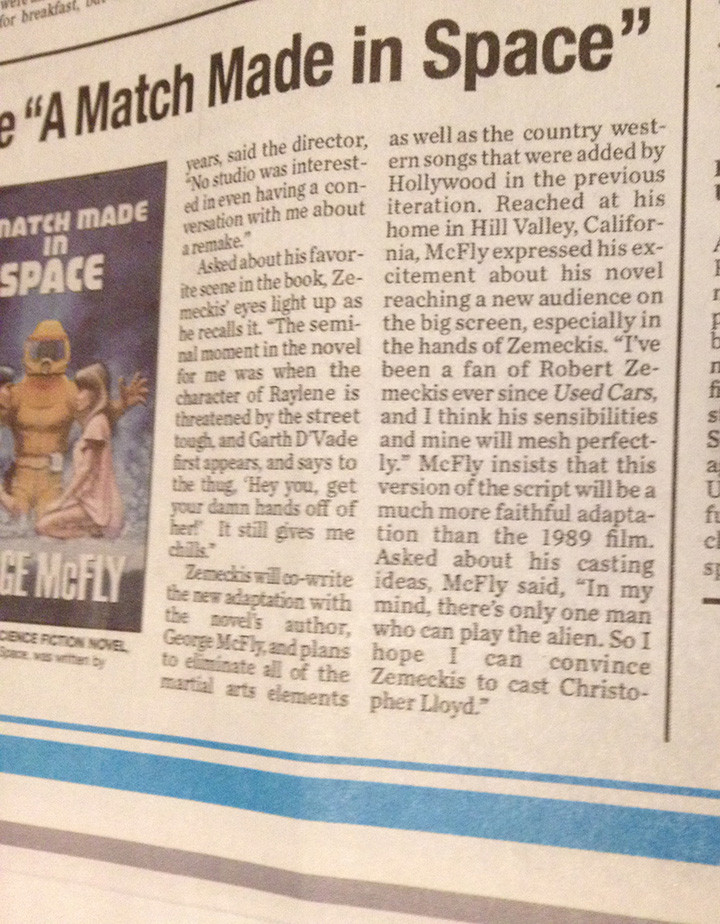 Matt Urbanos, vice-president of brand and creative strategy at Gannet (which own USA Today) says

We worked with Universal and Bob Gale to update the bottom half and add content that was relevant and cohesive as our way to finish the story and punctuate this moment.

Therefore, it can probably be accepted as canon.

Based on this, Lucas almost certainly thought of Darth Vader by himself.

Not the answer you're looking for? Browse other questions tagged star-wars back-to-the-future darth-vader vulcan or ask your own question.

63
Why was Marty present in his jump to 2015 in Back to the Future 2?
13
Is Marty McFly Traveling to Parallel Universes?
9
Did George Lucas base Darth Vader on Lightning from The Fighting Devil Dogs?
6
Why did Doc refuse to let Marty tell him about the night Marty went back to 1955?
4
Do any other dates in Back to the Future have any significance out of universe other than November 5?
28
Why does Darth Vader opt to physically strangle Captain Antilles at the beginning of “Star Wars” (1977) instead of “Force Choking” him?
8
Is the command chain of the Imperial military in Star Wars ever detailed in canon?
74
What did Darth Vader mean by “There’ll be no one to stop us this time.” Who had “stopped” Vader—or the Empire—previously?
23
If Marty had faded out, would that have destroyed the universe?
4
What happened to Marty in the altered timeline created by his original trip to 1955?