What is the term for baptizing a person as a Sith? Or (officially) converting a Jedi to a Sith?

I've checked out some sources but I don't know, Christening kind of sounds like it's out of place. Doesn't Christen mean baptizing a person as a Roman Catholic or maybe any Christian denomination in the name of Christ the Lord for that matter? That's why it is called "Christ"-ening in the first place?

Other than what I mentioned above, googling for the definition of "Christen" says:

Okay, but to my knowledge, the concept of Roman Catholicism, Christian Church or existence (or knowledge of historical existence) of a Christ was never mentioned in the Star Wars universe. Meaning, that term couldn't have had an origin that would make the other two definitions above valid.

Is there an official term for Baptizing a.k.a. "Christening" (as some sources say) a person as a Sith?

Is there a "Sithening" or something?

To the best of my knowledge there is no such term. There is no official ceremony nor a name for it. The apprentice (who does not necessarily have to be a Jedi who turned from the light) pledges himself to the Sith, and the Sith Master chooses a Sith name for his apprentice and gives him the title "Darth". This is how Anakin became the Sith Lord Darth Vader: 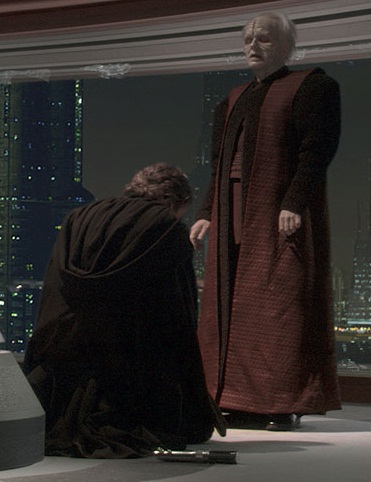 This is the text of that scene:

Anakin: I pledge myself to your teachings. To the ways of the Sith.

Palpatine: Good. Good. The Force is strong with you. A powerful Sith you will become. Henceforth, you shall be known as Darth . . . Vader.

Anakin simply pledges himself to the Sith and Palpatine gives him his Sith name.

There is no mention of a term like "sithening" or any sort of conversion ceremony in any of the following Wookieepedia articles which might mention it:

Other than the Episode III scene, the closest descriptions of a conversion that I can find are some quotes from a Legends book, which simply says that the Master "chooses" the apprentice. For example:

Bane’s Rule of Two ensured that the power of both Master and apprentice would grow from generation to generation until the Sith were finally able to exterminate the Jedi and usher in a new galactic age. That was why Bane had chosen Zannah as his apprentice: she had the potential to one day surpass even his own abilities.

The Master will train his apprentice in the ways of the Sith, until one day she must challenge him. If she proves unworthy, the Master will destroy her and choose a new apprentice.

In summary, a conversion to the Sith would therefore simply be described as a "pledge", or a Master "choosing" an apprentice, or perhaps an "entitling" since the apprentice gains the title of "Darth".

(Also, the term "Christening" is not limited to Roman Catholicism -- it is used by many Christian denominations.)

I kind of thought this was too obvious to actually be an answer, since no one else has mentioned it, I believe the term is "turning". As in:

Not the answer you're looking for? Browse other questions tagged star-wars jedi sith or ask your own question.

7
The Birth of the Jedi and Sith
6
Renegade Jedi that didn't turn to the Sith
15
Why don't Jedi and Sith wear minimal gear for maximal lightsaber efficiency?
24
Is there a general term for Jedi and Sith?
31
Female terms for Jedi/Sith
45
What's the correct plural of Jedi and Sith?
15
What weapons did the Jedi/Sith use before lightsabers?
3
What would happen to a Sith/Dark Jedi seeking redemption?