Title of a movie I watched around 2004~2006: Earth was destroyed and rebuilt, protagonist kills mice

I watched this movie when I was a kid so I can't recall anything but a couple of details:

I think that the monitor told the story of two kids that somehow turned into mice or something like that, and that-s when he realizes he killed the two mice.

Thank you for taking the time to read this, I have had the doubt for so long and I can't find the movie. Many people tell me it sounds like Hitchhiker's Guide to the Galaxy but I watched it and it wasn't.

[EDIT]: The movie might have been out before the given date, I just remember watching it around that time

This is the 2005 film Hitchhiker's Guide to the Galaxy, based on the novel and radio show by Douglas Adams. Every detail matches.

1- The Earth was destroyed but a friend of a protagonist reconstructed it.

At the start of the film, the Earth is destroyed by Vogons in order to make room for a hyperspace bypass. It is later rebuilt by the same crew who originally constructed it, including Slartibartfast, a friend of the protagonist Arthur Dent.

2- The protagonist has 2 companions, a woman and an older man

Arthur travels together with a woman (Trillian) and two men (Ford Prefect and Zaphod Beeblebrox): 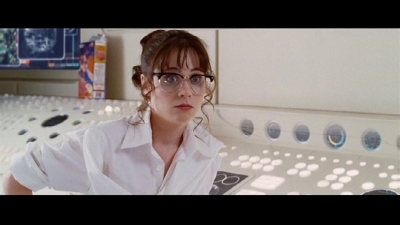 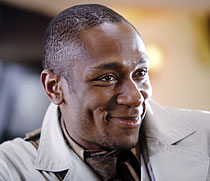 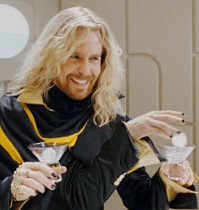 He also meets an older man, Slartibartfast, and travels together with him for only a short while:

3- There is a gigantic monitor-like thing. I think it was a screen, but it talked to the protagonist

This is Deep Thought, the computer designed to find the Ultimate Answer to Life, the Universe, and Everything (the answer being 42). In the film it is "shaped like a massive black metal trapezoid with a yellow rectangular display that blinked on and off in time with the computer's speaking."

4- The only "full" scene I can remember was the following: The protagonist is in a house with the two companions. There are 2 mice that then make the other two companions sleep and tie up the protagonist. They say that they are going to drill his head or something like that. I can't remember what does he do, but he finally like smashes the mice on the tablecloth but when he lifts his hand, there are 2 angel shapes.

This is an exact description of a scene towards the end of the film. I'll try to find a Youtube video showing this clip. Edit: OK, the best I found was this one, which stops just before he smashes the mice. You can see they're about to drill into his head, and Zaphod and Trillian are asleep on the other side of the table:

Many people tell me it sounds like Hitchhiker's Guide to the Galaxy but I watched it and it wasn't.

Perhaps the HHGTTG you watched which wasn't this was the 1981 TV series adaptation?

-3
In which movie was the “Ultimate Question” mentioned for the first time?