Why does the female changeling always appear in human form?

The female changeling nearly always appears in a female-Odo-like-version. I understand that she uses that form when negotiating with the Federation or meeting Odo, which is explained in other questions and answers. But that is not my question. She even keeps this form when Odo (or someone else from the Federation) is not around.

Why does she not take the appearance of a lifeform of the Gamma Quadrant (Jem'Hadar, Vorta, ...) or at least the form of allied species (Cardassian, Breen), when only together with them? Before coming to the Alpha Quadrant, they did not know how humans looked, so they must have another appearance when communicating with species there. Why did she not use this appearance? I remember that they replaced Martok with a changeling, so they should have the ability to take form of their allies or minions. 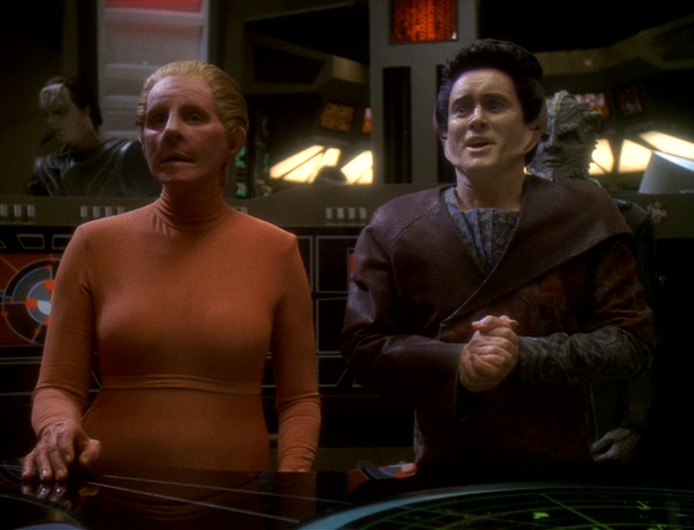 Is this ever explained in the series?

If I recall, the changelings didn't trust the solids enough to "not appear" humanoid. Odo himself is very self conscious about being seen in "his bucket" or otherwise during those times he just can't maintain his humanoid shape. Very few people are invited to see changelings in their natural state, Kira being one of those few.

There are countless examples that show the changelings despise all solids; the form she chooses is a basic humanoid form (no specifics features from any one species). What you're asking is the same as why didn't Sisko get pointy ears when he meets with the Romulans - it's insulting to both species (especially when the Founders think other species are lower life forms, and have no desire to try to make 'lower life forms' more comfortable).

They are proud of being different and superior; the basic form allows communication whilst simultaneously emphasizing she is a 'god among insects'; she won't belittle herself by assuming a form to fit in.

She says this to Odo, implying death was preferable to being a humanoid:

Female Shapeshifter: Ah, poor Odo. Perhaps we should have killed you. It would have been far less cruel. [After the Founders have turned Odo into a "solid"]

And this (again she's proud of being different) - the human form is only to interact, nothing more; she wants to control solids, not be like them:

Major Kira: You belong to the Dominion, don't you?

Female Shapeshifter: Belong to it? Major, the Changelings are the Dominion.

Odo: [understanding] You are the Founders!

Female Shapeshifter: Ironic, isn't it? The hunted now control the destinies of hundreds of other races.

Odo: But... why control anyone?

Female Shapeshifter: Because what you can control, can't hurt you.

Odo: How do you justify the deaths of so many people?

Female Shapeshifter: The Solids have always been a threat to us. That's the only justification we need.

Odo: But these Solids have never harmed you. They travel the galaxy in order to expand their knowledge, just as you once did.

Odo: No - I suppose they're not. And neither am I.

And finally the only time she takes full humanoid appearance is to understand Odo not wanting to join them:

Odo: But why lead us here? Why replace Major Kira?

Female Shapeshifter: I needed to understand why you chose to live with the solids rather than your own people. I suspected it had something to do with Major Kira. Now, I'm certain of it.

Female Shapeshifter: Save her, if it suits you. But it won't make any difference. She is never going to love you. How could she? You are a Changeling.

This all points to them wanting to be different, being proud of it, and having no need to belittle themselves by pleasing solids.

One more thing too: if you were a politician going to China I'm pretty sure you would not squint your eyes to look like the locals (might not go down too well).

Not the answer you're looking for? Browse other questions tagged star-trek star-trek-ds9 changeling or ask your own question.

19
Why do the other changelings look like Dr Mora?
14
What does "female" mean for the Female Changeling?

26
Why did the Female Changeling surrender?
18
Why addict the Jem'Hadar to Ketracel White?
9
How does the baby changeling transfer itself into Odo?
14
What does "female" mean for the Female Changeling?
2
Would it really matter, if Odo had never contacted The Great Link?
2
Can Founders/Changelings thrive (survive) in extremely cold temperatures?
5
Why would the changeling take Garak to Sisko?
10
Does a Changeling have its own distinct body?