How did the Talz get on Orto Plutonia?

In an episode of the Clone Wars, Obi-Wan encounters a primitive tribe of Talz on Orto Plutonia. How did the Talz use interstellar technology to get to Orto Plutonia, only to revert back to a primitive civilization. I find it difficult to believe that they intentionally got rid of technology, and I know that the Talz are capable of space travel, as one can be seen in Mos Eisley Cantina in Episode 4.

The Wookieepedia (which I know is not canon) states that despite not having hyperdrive technology, they are still able to colonize Orto Plutonia; although, the colonists don't seem to exhibit the knowledge of space travel of any kind.

The question is difficult to answer because there are several things we don't know:

We also don't know how many the community started out with, if they were just dropped off by other Talz, or if they just got there via 'hitchhiking'.

The Talz were only found on three planets, all of which are in relatively close proximity. They were found on their homeworld of Alzoc III in the Alzoc system, as well as on Orto Plutonia in the Pantora system. As you can see in the appended image, the two systems are right next to each other. 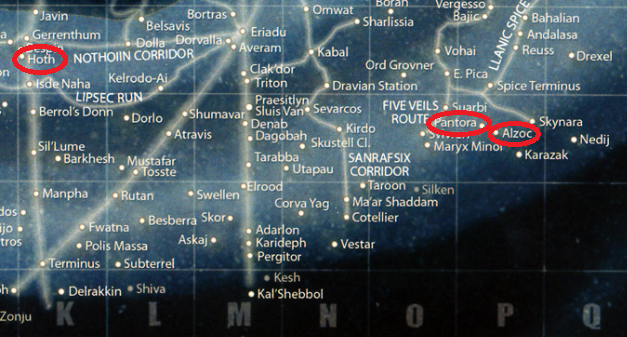 The third planet they are found on is also circled, Hoth, and it is unclear how they got there, only that they have been moving around in space since at least 3993 BBY. When you consider that there are also sleeper/generational ships as a way of getting around, in addition to 'hitchhiking', it is not impossible for the Talz to have reached Orto Plutonia (and Hoth) with little to no advanced interstellar technology.

To answer the second/more general point of your question, as Hothie mentions in his comment, there are are several examples of species in the Star Wars Galaxy regressing technologically; the Killiks, the Kwa (now Kwi), and the Rakata. Usually this happens due to over-expansion, isolation and/or the species undergoing some sort of trauma - often all three at the same time. In the above three examples, they were all technologically advanced species, but this can presumably happen to a species that starts out with a primitive level of technology and finds itself isolated or under duress.

From a galactic point of view, technological regression is also a theme, see here, here and here.

First, it’s important to note that all the canonical appearances of the Talz (besides the episode in which they first appeared chronologically) have been after the Clone Wars. A New Hope occurs 19 years after the end of the Clone Wars, and thus at least 20 years after this episode. The other appearances of Talz are in the Princess Leia and Darth Vader comics, as well as Before the Awakening. There’s also a brief reference in Aftermath: Life Debt. All of these occur after A New Hope. As such, the appearance of Talz elsewhere in canon does not establish that they ever had space travel before "Tresspass," or even that they existed off of Ordo Plutonia.

However, two things do make it likely that there are Talz elsewhere in the galaxy:

This last point makes it quite likely that the Talz as a whole are no less technologically advanced than other species in the galaxy. Would Obi-Wan really know the species name of an isolated, low-tech species?

The group of Talz on the planet have been there for a long time:

OBI-WAN: It seems we’ve stumbled onto an inhabited planet.

CHO: Impossible. Our explorers have spent much time here over the long history of Pantora. No one lives here. They’re trespassers.

OBI-WAN: With respect, Chairman Cho, these creatures, the Talz, aren’t advanced enough to master space travel. I think they may have been here longer than Pantora.

Oddly, he speaks as if “the Talz” refers only to the group on Ordo Plutonis, despite the only reasonable way for him to know their name being his having encountered them elsewhere. But the meaning is clear: this group is incapable os space travel.

Obi-Wan suggests that the Talz may well have been the original residents of Ordo Plutonis. While he cannot be sure of this information, it fits with the general theme of the episode: the Pantorans, who claim to own the planet, are the trespassers, not the Talz.

The Databank confirms that the Talz had indeed been living on Ordo Plutonia for a long time:

Orto Plutonia had long been a protectorate of the Pantoran moon, after Pantoran scouts searched the world and found no denizens amid its frozen features. They had missed the Talz population, which lived hidden in the ice canyons in villages carved out of the ice walls, filled with huts made from animal skins pulled over bone-frames.

Presumably the Pantorans appraised the moon as having no resources of value, and thus had little interest in it. Ice planets are a dime a dozen in a universe with space travel, so it would have little scientific interest. And, as Obi-Wan says:

OBI-WAN: They only want to be left alone.

It thus seems likely that the Talz were intentionally hiding from the Pantorans, which is borne out by their later asking the Pantorans to get off of their planet.

In any case, all this suggests that the Talz were long-time tenants of Ordo Plutonis, but how they arrived and lost their technology is unclear. It wouldn’t be the first instance of a spacefaring species reverting to lower technology levels, though. In Obi-Wan and Anakin, the title characters find a planet with a human population that has reverted to lower technology levels as the result of a long war. Something similar could have happened to the Talz, or some other cause could be at play, such as kidnapping, a spaceship crash, or a variety of other things.

24
Has technological progress stopped or reached a peak in the Star Wars universe?
38
Is the Star Wars galaxy (or the Force) dying?
1
Did technology progress at all by 138 ABY

43
Is there faster-than-light communication in the Star Wars universe (other than hyperdrive)?
18
Could several Jedi peacefully overpower one Sith opponent through nonviolent Force techniques?
8
How did Grievous survive the Gungan attack?
5
How did the Clones find Jedi Investigators during Order 66?
12
Why didn't Obi-Wan use the Force in the Cantina?
8
How long after Ahsoka left the Jedi order did Order 66 happen?
1
How did Asajj Ventress hack Savage Opress?
4
How did Rex know that Palpatine was Sidious?
3
Why didn't Obi-Wan offer an apology or pay for the mess at Chalmun's Cantina?