Can anyone identify this story for me? I read it in my youth and wish to have my son read it.

Ahead of an impending invasion several men are sent to a distant planet in the invader's path, set to arrive at different eras so they can each guide that civilization to modernity quicker, thus creating an ally against the invading force

The men are humans, the civilization is very primitive and near human and they have a very strong faith in a mother based religion and they eventually defeat the attackers and then conquer Earth because they feel Earth needs to be saved by "Mother" 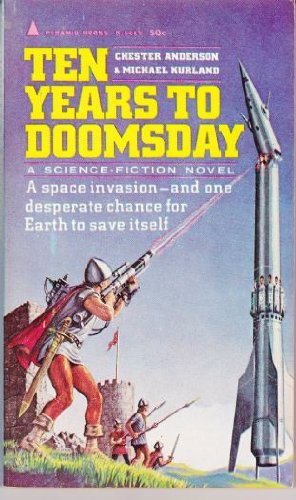 Published in 1964 by Pyramid Books.

Quoted from an Amazon review:

As the book begins, an evil race of aliens threatens the star-spanning Terran Alliance. The aliens’ path to Earth leads through a human-colonized world that seems particularly hapless. As we meet them, the settlers on the planet Lyff seem a quiet people. They have a rigid society which revolves around their king and petty nobility. Even after thousands of years of civilization, the people of Lyff haven’t passed beyond an agrarian lifestyle which barely provides greater than subsistence living.

After their initial reconnaissance, the aliens plan be back in ten years to conquer Lyff and then begin their implacable march through the Terran empire. A stand needs to be taken on this small world, and quickly. But the aliens have astounding technology. How can a tiny planet like Lyff possibly defend itself?

Thankfully the Terrans have a plan: send a team of three scientists to Lyff to help jumpstart the world’s technology. These men start with the introduction of the telegraph but very quickly things begin to take their own momentum and the colonials soon prove to be much more sophisticated than the Terran colonizers expected. What at first seems like indolence or a lack of ambition soon proves to provide a pattern for technological innovation far beyond what anyone could have expected. The arrogant Terrans learn there are more things in heaven and Earth than are dreamt of in their philosophy.

The humans underestimate the Mother religion, and it turns out their holy book was actually about science and they thought it was about ethics. The humans introduction of new scientific concepts made them realize this. There's a scene at the end where the new ships each use a different method to launch, from different rocket fuels, interstellar drives or simply tractoring a star and letting it pull them off the planet. They do defeat the aliens. There is talk at the end of conquering Earth.

Your description sounds a bit like portions of a Doris Lessing sequence I read a while back:

Not the answer you're looking for? Browse other questions tagged story-identification time-travel alien-invasion or ask your own question.

9
Lizard Men from Space Invade Earth
13
Short story describing an alien invasion where humans are the invaders
8
Golden Age or Pulp far-future story, where humans are artificially evolved to neutralize them
13
Intelligent plants fight off invaders by engineering their plants to be intelligent, too
37
Short story about alien invasion with a twist.
14
What was the first science fiction story that showed a successful alien conquest of the Earth?
7
Trying to track down a striking SF short story set in small town 1950s America
5
90s sci-fi novel with two worlds, one grim another pastoral with the war-cry “Ire, Iron and 'voorstrod'”
17
Novella with Humanity Surrounded in Fortress City