Could Thor use Mjölnir to pin Hulk to the ground?

In Thor (the movie), we see Thor (the character) pin Loki (the trickster) to the ground using Mjölnir (the hammer). (superfluous parenthetical comment here).

In the Avengers, we see that the Hulk is unable to lift Mjölnir. 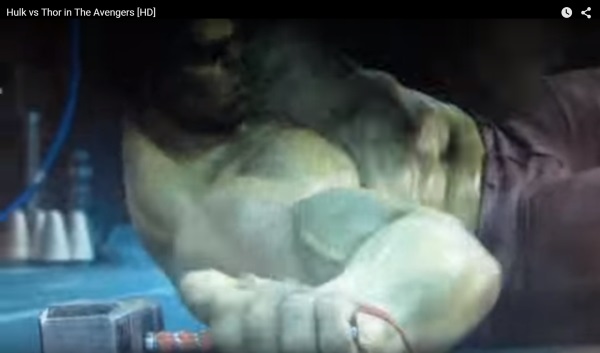 In this instance, Hulk's hand should be trapped under the hammer, and yet he is able to let go. This could be similar to how Stark trapped the Hulk in a cage in Age of Ultron, and Hulk dug his way out from under it. 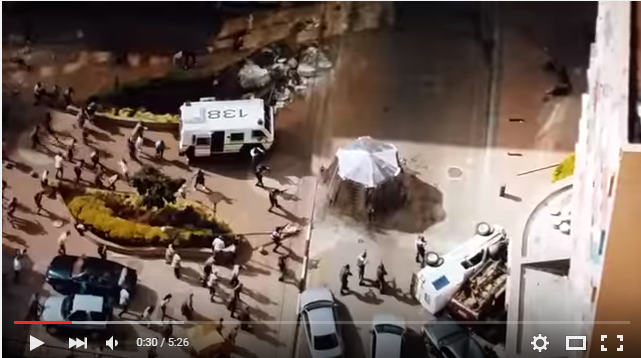 If Thor placed Mjölnir on the Hulk's chest, would it incapacitate him to similar to what was done to Loki?

Note: In an alternate universe, we might say it was adhered to his chest using Toad's spit, and that a time traveling robot placed it there.

There is an incredibly similar question with an excellent answer here on Quora, even describing how different forms of Hulk would react to Thor's hammer being placed on them. This answer would have been a comment, but I am lacking in reputation, so shall attach an overview of Thaddeus's answer on Quora here.

Savage Hulk: Would slam his fists against the ground until an earthquake occured which caused the hammer to move in relation to the Earth.

Mr Fixit: Would feign unconsciousness until Thor came to retrieve his hammer, then attack him using underhand fighting techniques.

The Professor: Persuade Thor to remove his hammer using sheer smooth talking, or if this failed he would let Mjolnir rip through him, then standing up and regenerating that area of his body, as he had been seen to do before with the entirety of his flesh.

Even if we were to assume for a moment that the distance between handle and floor were large enough for Hulk to slide his hand out (of which there was no evidence in the scene), there's still no reason to assume that literally placing the hammer on top of Hulk wouldn't have precisely the same effect on him that it does on everyone else.

Based on what we've seen so far in the MCU, there is only one version of Hulk and his strength was not enough to overcome the enchantment. So it is reasonable to assume that Hulk could be pinned down in the same manner as Loki. The two reasons why this hasn't been used as a solution to stop Hulk are:

Source: I wrote several scenes in 2011's Thor, including the one where Thor immobilizes Loki by placing the hammer on Loki's chest.

Loki couldn't move it, and never would be able to, unless he was "worthy" (hero's journey, pure of heart, defender blah di blah) like Thor was/is. Could Loki redeem himself and become a good person (and be able to lift/wield Thor's hammer? Maybe. But that's a separate potential movie/story that hasn't even been written yet.

The Hulk's superpower is rage. Smashing. He's always angry. And therefore absolutely UNworthy to ever wield Mjolnir. So in a Marvel version of 'rock, scissors, paper', Mjolnir will always trump Hulk/Banner. Always. He's simply not worthy!

Not the answer you're looking for? Browse other questions tagged marvel marvel-cinematic-universe thor-marvel the-incredible-hulk mjolnir or ask your own question.

12
How does Hulk carry both Mjölnir and Thor?
10
How was Loki able to visit Earth without using the Bifrost?
15
How could Thor's hammer Mjölnir be forged in the heart of a dying star?
1
Is anybody except Thor able to summon Mjölnir?
4
In the Comics are Thor and Hulk evenly matched?
19
How exactly does the Thor vs Hulk fight end in Thor: Ragnarok?
4
Could Thor get himself a new Mjölnir?
12
Do the shards of Mjölnir have the same enchantment as Mjölnir?