How many Hogwarts students changed year from book to film?

As requested by rand al'thor, a follow-up question to How many Hogwarts students changed House from book to film?:

How many Hogwarts students changed year from book to film?

In the book series, we know Cho Chang was definitely in the year above Harry, for Wood tells Harry when he is in his third year:

'Harry, I've just found out who Ravenclaw are playing as Seeker. It's Cho Chang. She's a fourth-year, and she's pretty good ...'

Harry Potter and the Prisoner of Azkaban - p.188 - Bloomsbury - Chapter 13, Gryffindor versus Ravenclaw

However, in the film version of Harry Potter and the Deathly Hallows (part 2), she is shown in the Room of Requirement with everybody else when the trio arrive via the secret passageway behind the picture of Ariana Dumbledore. This implies that she was not in the year above Harry (for she would have already left Hogwarts if she were (as per the books)) and was most likely in the same year as him. The "infallible" Harry Potter wiki says the same, though it does not seem to provide a reference - not needing to, of course, for it is never wrong ... :P

So, did Cho Chang definitely change years in the films and, if so, were there any others?

(Hint: I believe I recall seeing Katie Bell and Romilda Vane in Slughorn's potions class in The Half-Blood Prince so these are two free candidates to get you started. Proper references will garner upvotes :P )

Basically, in the films almost every major character is in Harry's year, just to simplify things.

Hermione: I'm sure Harry's kissing was more than satisfactory. Cho spends half her time crying these days.
Ron: You'd think a bit of snogging would cheer her up.
Hermione: Don't you understand how she must be feeling? Well, obviously she's feeling sad about Cedric, and therefore confused about liking Harry, guilty about kissing him, conflicted because Umbridge is pressing to sack her mum from the Ministry, and frightened about failing her OWLs because she's so busy worrying about everything else.
Ron: One person couldn't feel all that. They'd explode!
Hermione: Just because you've got the emotional range of a teaspoon...
-- HP and the Order of the Phoenix, film

OWLs are taken in the fifth year, so Cho is in her 5th year (the same as Harry) in OotP.

So did Romilda Vane.

Romilda is a fourth-year student in HP and the Half-Blood Prince book, two years below Harry:

Before he could respond, however, there was a disturbance outside their compartment door; a group of fourth-year girls was whispering and giggling together on the other side of the glass. ... And one of them, a bold-looking girl with large dark eyes, a prominent chin and long black hair, pushed her way through the door. 'Hi, Harry, I'm Romilda, Romilda Vane,' she said loudly and confidently.
-- HP and the Half-Blood Prince book (thanks to Au101 for providing the quote)

In the film, though, she's in Slughorn's Potions class in the same year as Harry: 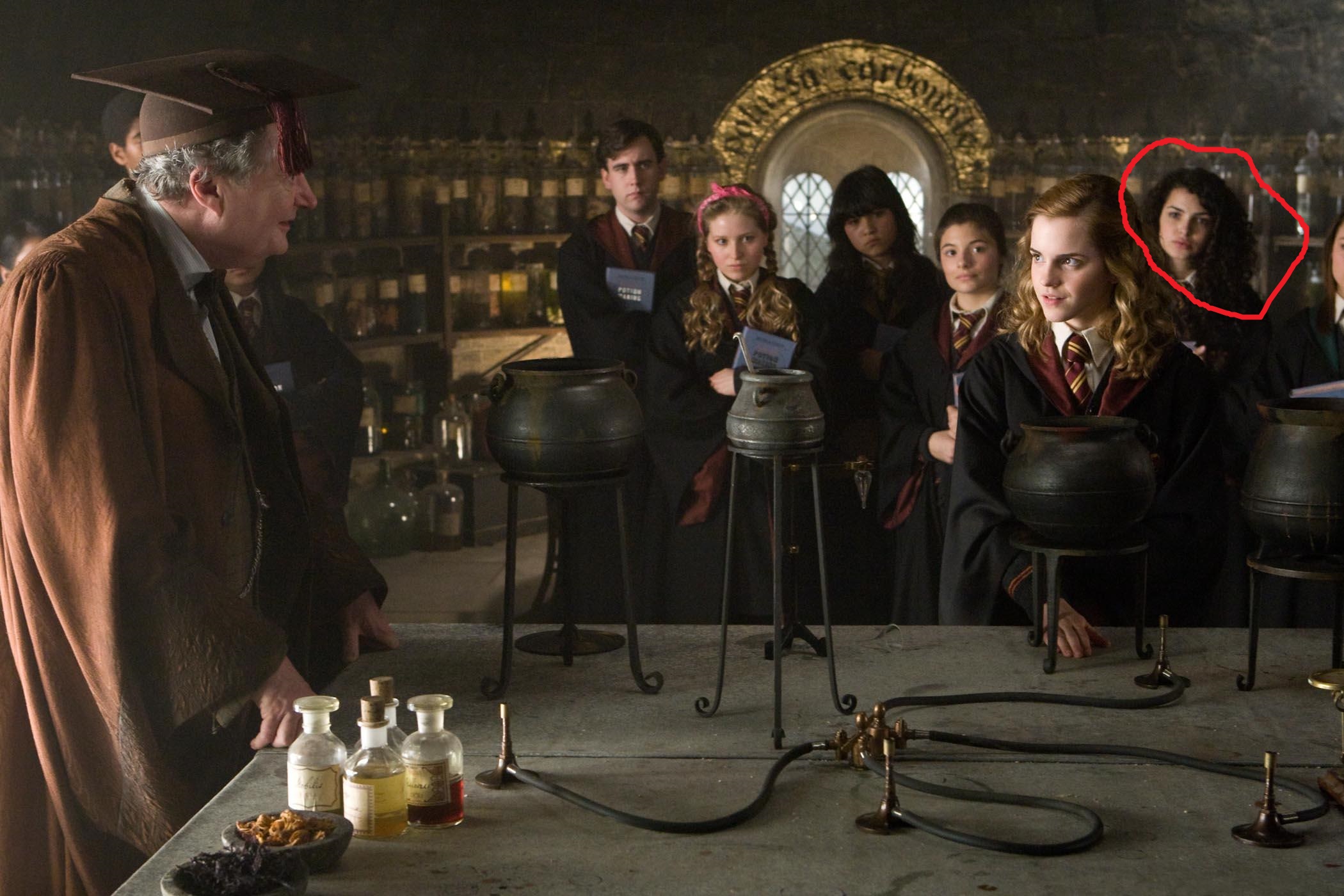 Katie Bell did not.

I haven't come up with anybody else yet...

Per the comments to rand al'thor's excellent answer, I just wanted to go ahead and post an answer to say

(But there are conditions)

In the books, Katie Bell is not in Harry's year. She is already on the Gryffindor Quidditch team when Harry joins it and it would be hard to understand all of the fuss if Katie Bell had only just joined.

'Seeker?' he said. 'But first-years never - you must be the youngest house player in about -'

'- a century,' said Harry, shovelling pie into his mouth. He felt particularly hungry after the excitement of the afternoon. 'Wood told me.'

What's more, we never see Katie Bell in any of Harry's classes (including first year flying lessons), we do not see her getting sorted and she is never mentioned as one of Hermione's dormmates. Now, this would be understandable if she were a non-entity (I know there's a lot of speculation about the real size of Harry's classes and whether there were a lot more Gryffindors in Harry's year than we ever see), but for a significant minor character (if you see what I mean), it seems almost inconceivable.

In any case, it is finally confirmed beyond all doubt in Harry Potter and the Half-Blood Prince, where Harry is in his sixth year[citation needed]:

They returned to the common room, which was empty apart from half a dozen seventh-years including Katie Bell, the only remaining member of the original Gryffindor Quidditch team that Harry had joined in his first year.

And yet she is clearly seen in Harry's Potions class in the movie of Harry Potter and the Half-Blood Prince (thanks to rand al'thor for the image): 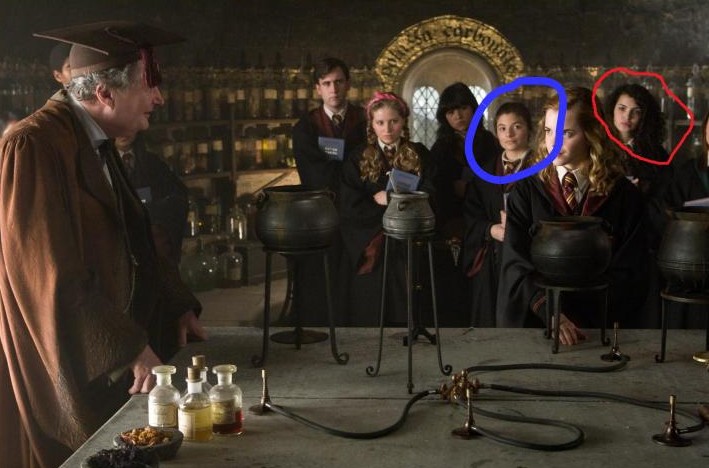 (Katie Bell is highlighted in blue).

It is quite hard to see why she would be in Harry's sixth year class, unless she was a sixth year in the film version.

She is also shown wearing school uniform during the Battle of Hogwarts in Harry Potter and the Deathly Hallows Part 2, implying she was still at school when those events took place. This could only put her in Harry's year.

However, as I say, there are conditions. The film version of Harry Potter and the Philosopher's Stone also has the fuss about Harry joining the team:

Ron: Seeker? But first-years never make the house teams. You must be the youngest Quidditch player in a -

Harry: - century. According to McGonagall.

And, again, all the old arguments about never seeing her in any of Harry's classes (even when new characters like Bem were literally written in) until the Half-Blood Prince apply.

In the first two films, Katie Bell is played by a different actress. Then, she is largely written out until the sixth and seventh (second part, I believe) films, where she is recast and given more prominence. I think we can safely assume that the change of years happened for Harry Potter and the Half-Blood Prince, in order to highlight a character who had a relatively major role to play in the plot of that film; but who had until then (in the movies, at least) been a very minor presence.

Not the answer you're looking for? Browse other questions tagged harry-potter hogwarts adaptation-comparison or ask your own question.

11
How can Cho Chang be afraid to fail her O.W.L.s if she's a year ahead?
27
In Deathly Hallows, why is Cho Chang still at Hogwarts?
12
How many Hogwarts students changed House from book to film?

12
How many Hogwarts students changed House from book to film?
2
Were the Hufflepuff and Slytherin Quidditch teams sexist?
33
Why doesn't the Hogwarts staff stop Myrtle from spying on students taking their baths?
11
In Book 6, why were Dumbledore's and Snape's combined efforts in making Malfoy reveal his murder plans so feeble?
52
Why does Harry not know / realize that he's already performed a 'Wronski Feint'?
25
How did Dennis Creevey get into Hogsmeade?
17
Why didn't Hogwarts shut down after these type of events?
3
Did Luna and Neville ever date at all after the “Harry Potter” series ended?