I read the book probably 11-ish years ago. Then I was 12 and got it from a community library. You'd probably describe the book as Childrens or Young Adult Fantasy. Of course this was before Young Adult really took of. The reading level and page count is probably similar to William Nicholson's The Wind Singer, as I read that around the same time.

I remember the title is along the lines of "Outcasts" or "Exiles" and the cover had a small party riding a canoe, being attacked by giant eagles. But it seems that's not enough information to find the book through a search engine.

The story begins in a small farming community by the sea. A new man (let's call him Peter) moves into the community with his teenage daughter, and he builds a round hut instead of the customary square hut. And he eats fish instead of farming. The inhabitants think, "What a wicked man to build a round hut; What a wicked man to eat fish." Of course I may have gotten round/square huts and fish/farming backwards. But the point is he didn't follow local customs.

So for some reason the protagonist, probably a teenage boy, gets wrapped up with the man and his daughter (maybe they are exiled) and they end up on a boat, sailing back and forth between various islands and having adventures. Oddly enough I don't think being attacked by giant eagles is a large part of the story. On one such adventure an adult woman joins their party. In the end they settle down and she marries Peter.

The only other thing I remember is the story did not have much circularity. For example they never made it back home. They wander back and forth through a series of unrelated events before settling down. Of course there might be a lot more going on below the surface than I registered at the time. Perhaps the real circularity was to do with how the characters develop.

This book is called The Outcasts by Tom Ingram 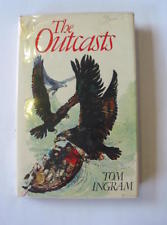 A young boy named Col, born with white hair, lives in a highly superstitious village dependent on their sheep for survival. Recently, giant eagles have begun killing their lambs, seemingly entirely for sport. Col and two foreign outsiders, Hasset and Illy, are determined to be the cause of the troubles and are exiled to search for the reason why the giant eagles are attacking. Over the course of the adventure, they learn that this is not the only village suffering such attacks and that the eagles may not be as evil as thought.

You are right about the shape of the hut and the fish, as well as that they pick up a woman and her child, and they never make it back home.

Not the answer you're looking for? Browse other questions tagged story-identification novel young-adult childrens-novel or ask your own question.