Hoping someone can identify this episode or movie I saw in the late 80s or early 90s.

A group of 5-10 people, males and females, are trapped inside a large ship (or bunker, or something). Inside with them are 2-3 killer robots. The robots roll around on wheels, are about 4 feet tall and are white. I remember thinking they looked like sleek, futuristic dumpsters - the small 2-yard dumpsters you see in narrow alleyways in some cities.
When the robots catch and kill someone, it appears that they harvest their legs, for lack of a better description. For the rest of the film/episode after a kill, the robot rolls around with one leg from each of its victims sticking out of the top of it, foot pointing upward.

It has the feel of a British sci-fi, but I'm not sure whether it's actually British. The sets remind me of the later seasons of Red Dwarf: very dark and industrial, a lot of pipes and metal grating, red and yellow background lighting.

I also seem to recall one of the women of the group being dressed in very gaudy 80s dance-club style attire. I'm pretty sure she was rocking a pink boa.

Longshot, but this sounds a bit like "Paradise Towers", an episode of Doctor Who from 1987. The episode itself takes place in a run-down apartment tower, which has turned into a kind of dystopian micro-nation.

The primary antagonists, at least for a while, are the Cleaners, white robots who have developed a bit of a taste for human flesh: 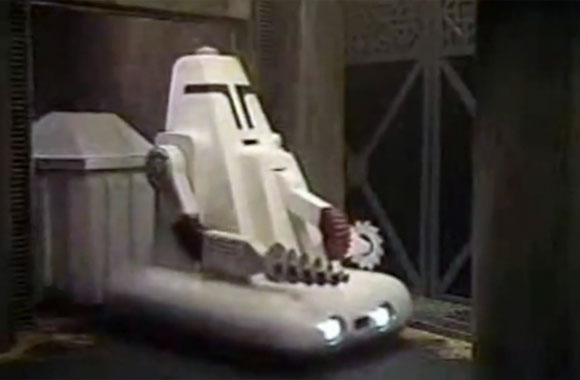 Note the dumpster-like thing dragging behind; every time a Cleaner kills someone, we're treated to a shot of one of those bins trundling off, with a foot sticking out the top: 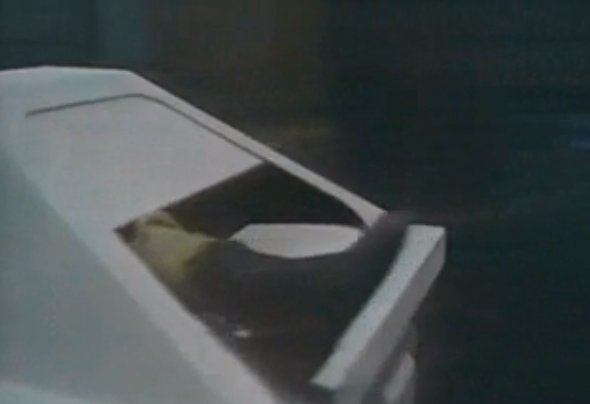 Thanks to Mr. Lister for the screenshot

Despite the setting being an apartment building, many scenes look very industrial; the lair of the Kangs, a gang of teenaged girls stirring up trouble, is essentially a concrete bunker: 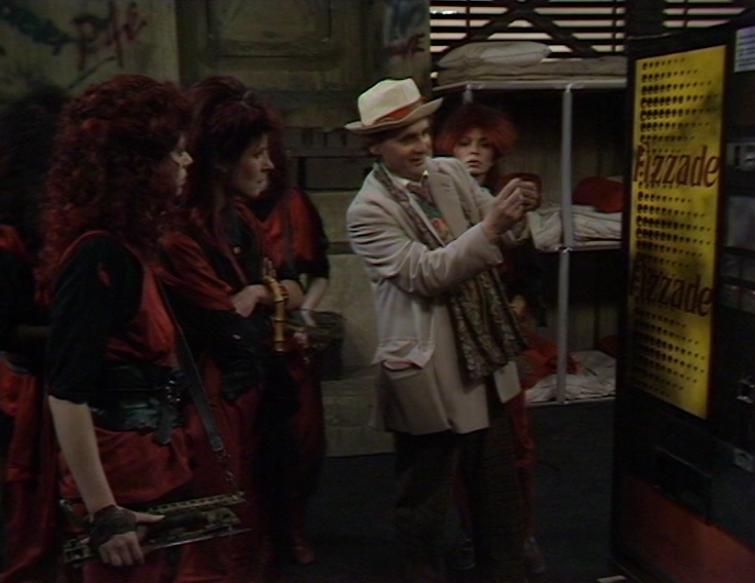 And parts of the set, particularly the basement (where the real Big Bad is hiding) is rather more industrial-looking.

Can't help you with the pink boa, though. However, as Mr. Lister reminds me in comments, some of the Kangs wore red scarves: 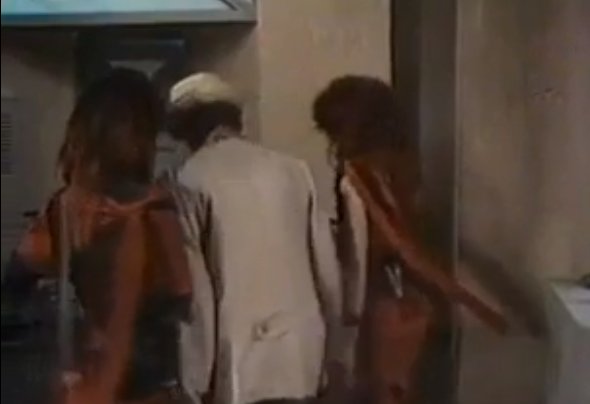 Thanks to Mr. Lister for this screenshot, too