Why didn't the T-800 Arnold-bot fulfill its mission in the parking garage before the Police arrested Reese?

I'm looking for an in-universe answer as to why the T-800 chose to escape from its vehicle rather than terminate Sarah Connor after crashing the Police car into the parking garage wall just prior to Reese being arrested. 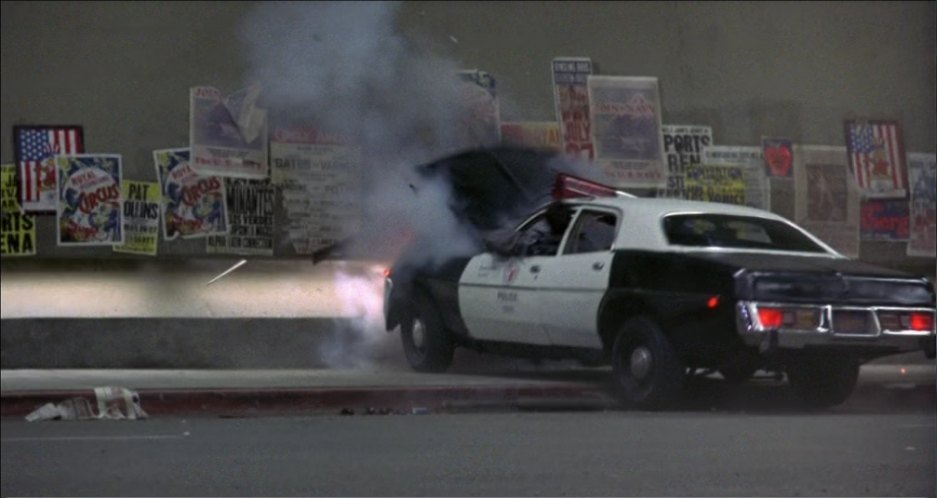 Sarah was just a few feet away in an immobile car, the police were there, but not close enough to interfere in time.

I'd like an in-universe answer from director/writer interviews, script notes, or novelizations.

Why didn't the Terminator continue its attack on Sarah in accordance with its Skynet programming before the Police arrested Reese? The opportunity was there, yet the T-800 didn't take it.

Echoing my answer to the same question on movies SE, this is covered in the Frakes novelisation:

The police cruiser folded around the cyborg like a cheap accordion. Terminator’s vision dropped out first. Then all the systems in its microprocessor went offline due to the horrific impact to its hardened chassis.

A shadow among shadows, Terminator climbed with slow, patient steps up the fire escape to his second-story window. It avoided using its disfunctioning right wrist until it could determine the full extent of damage it had sustained in the initial combat.

It had taken the cyborg nearly an hour to get from the site of the crash back to its hotel room.

It had moved on foot for the first couple of miles, allowing the systems to come fully on line in order to assess their condition. Aside from the wrist, there was almost total visual occlusion of the left eye. The eye itself seemed to be functioning properly. It was the surrounding tissue that was hindering performance.

Starting with the As, Terminator rapidly dialed every police station in Los Angeles until it reached Rampart Division.

Now it was time to move out. The target was waiting.

Not the answer you're looking for? Browse other questions tagged the-terminator the-terminator-series skynet or ask your own question.

0
What happened to the T-800 when the cop car crashes into the wall?

7
Why didn't John Connor give a good cover story to Kyle Reese?
28
How was Skynet created in the original timeline?
10
What stops Skynet from just sending later cyborgs back to the same time they sent the first terminator?
12
Was Skynet limited in how far into the past it could send back Terminators?
2
Did the T-850 self terminate?
9
Can a Terminator feel affection?
25
Who sent the T-800 nicknamed "Pops"?
9
In T1, was Skynet's actual goal to kill Sarah Connor, or to spawn Skynet itself?
31
Was the T-800 certain it had the right Sarah Connor?
11
Terminator escape teamwork?