Here are the details of the movie:

Can you please identify the movie?

This appears to be Scary Sexy Disaster Movie, released in 1999. It was also released as "Titanic 2000".

It involves the Titanic 2000's maiden voyage, with vampires as passengers.

The vampires are lesbians, and the movie contains a fair bit of nudity and sexual situations.

However, I cannot find any mention of the director also being a star of the movie. 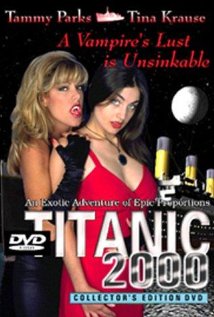 From one of the IMDB reviews:

the year is 2000 and the titanic (excuse me, the TITanic as they call it in this soft-core flick) is being rebuilt for another doomed voyage from new york to england in this failure of spoof of the 1997 hit movie titanic with Leonardo Di caprio and Kate winslet. however, they had to make some changes in building the ship. for example, in order to have enough money to buy the captain is golden steering wheel, which ends up being stolen, they had to finish the ship in aluminum. in addition, all of the life boats had to be taken off the ship so the weight capacity can include a snotty rich man's car. in this film, there is also an unexpected passenger on board the ship, the sexy lesbian vampire vladima and her two henchman.

12
Movie Identification: 1980/1990's movie with flying creatures and a beautiful actress
6
What is the name of the movie from 80's with ray cyclotron from observatory?
7
Identify This Movie: Robed creature sent by white-noise bad guys to abduct little girl
2
Sci-fi movie about auras and spirituality from the 80's or maybe 70's
8
I can't remember the title? Post-apocalyptic- Teens run away from cave cult in the desert to the city?
9
Short story where TV audiences vote on the plot points of live serials
6
Japanese animated movie where a plague that turns people into stone spreads across the Earth