Why did Adrian Veidt choose such an obvious password?

In Watchmen, Rorschach (Kovacs) and Nite Owl (Daniel) discover Ozymandias' (Veidt) plan after breaking into his office computer. The password he used was incredibly easy to crack: Rameses II. There was a book of that title on the shelf beside his desk, and he was known to be obsessed with Egyptology, Pharaohs, etc. Even worse, his superhero name - Ozymandias - is the Greek version of the name Rameses II. Considering the fact that he's supposed to be the smartest man on earth, it appears that he wanted his former colleagues to uncover his plans.

After their discovery, Nite Owl and Rorschach head to Veidt's headquarters in Antarctica. As a result, they aren't killed in the attack on New York City. This might be interpreted as a sign that Veidt is still fond of his former colleagues, and doesn't want them to die. When Daniel visits Veidt earlier in the story, Veidt does seem to be genuinely happy to see his old friend, which could lend some support to this idea; on the other hand, Veidt is nothing if not a duplicitous schemer, so he could have been putting on a show to allay suspicions.

However, the fact that Nite Owl and Rorschach survive the attack on NYC puts Veidt's plans in jeopardy, because they might tell the world what really happened, which would render Veidt's scheme useless and provoke the very war he was trying to prevent. In order for the plan to work, Veidt needs Dr. Manhattan alive and willing to go along with it, but the fates of the other Watchmen is largely irrelevant - in fact, it would be slightly better, from Veidt's perspective, if the other Watchmen were dead and unable to expose the plot.

So here's the question:

Why did Veidt use such an obvious password? It seems clear that he wanted Nite Owl and Rorschach to find him out, but why?

The very short answer is that while Adrian may be a genius, he does have the classic supervillain 'Achilles heel' when it comes to his obsession with history. Not only does he model himself on Ozymandias but he puts his plan at severe risk through his choice of names for the various parts of his scheme;

There's no special indication in the graphic novel that he's expecting to have his computer system cracked although it has to be admitted that his security absolutely sucks. 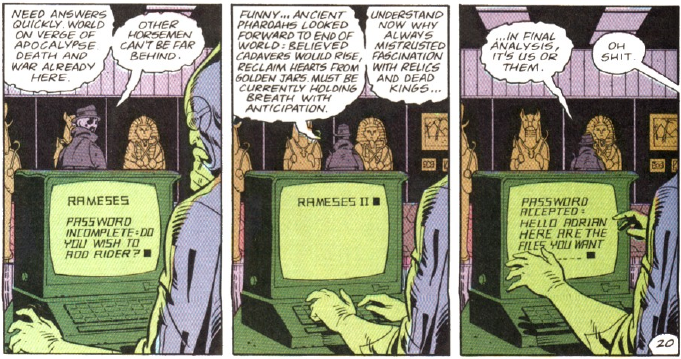 In the film, it's even less likely given that he has what appears to be gay pornography on his desktop

Maybe Adrian wanted the files to be found so to lead the others to Karnak. If he said "Come to Karnak I have something to show you" then they may be suspicious of a trap. Doing it this way they feel they have the upper hand and so be more comfortable with the meeting.

It's just Moore being clever. The recurring theme of that issue is "Two Riders"- Night Owl and Rorschach taking Archie to Antarctica, two people on horseback during the "Black Freighter" segment, the missionaries on bicycles, Nixon and Ford on Air Force One and Two... so the "rider" for the password is "II".

Also, the late '80s readers were not as tech-savvy. As was pointed out above, most people took "War Games" at face value.

Not the answer you're looking for? Browse other questions tagged dc character-motivation watchmen or ask your own question.

11
What is the in-film explanation for Comedian's crying?

8
Why did the ring choose Sinestro?
19
Why did Jon Osterman never contact his father?
12
Why did Ozymandias open his vivarium?
23
Why did Ozymandias think that the intrinsic field trick would work?
0
Why did the ring choose Hal Jordan?
21
Why did Princess Leia choose R2-D2?
18
Why did Voldemort choose Bellatrix Lestrange for this very important task?
35
Why did Denethor choose to burn himself to death?
23
How is Ozymandias so strong?