What are Wizarding society's attitudes towards homosexuality?

We know that in-universe, same-sex relationships and attraction exists in Harry Potter wizarding society according to Word of God.

If you read some many most fanfiction, they make it a point in-universe that - unlike in Muggle society - wizarding world doesn't have any issues with homosexuality (and frequently find Harry's surprise at the attitude amusing due to his Muggle upbringing and unfamiliarity with Wizarding world).

Is there canonical (including WoG from JKR) information regarding Wizarding society attitude about homosexuality?

In a 2007 interview with PotterCast, Rowling said that the wizarding world is much more concerned with blood purity than with sexual orientation, although it ultimately comes down to an individual level (emphasis mine):

MA: We wanna talk about Dumbledore so bad. We know that you've created worldwide intrigue when you said that he is gay. But I wanted to ask you about homosexuality in the Wizarding World in general. Is it a taboo?

JKR: Now, that's something I never thought of. I would think that that would be-- it would be exactly what it is in the Muggle World. But the greatest taboo in the Wizarding World is, well, for some wizards... I mean if we're talking about prejudiced people within the Wizarding World, what they care most about is your blood status. So I think you could be, um, gay, pure-blood, and totally without any kind of criticism from the Lucius Malfoys of the world. I don't think that would be something that would interest him in the slightest. But, you know, I can't answer for all witches and wizards because I think in matters of the heart, it would be directly parallel to our world.

That interview makes it sound as though it's something that's not talked about, but also won't get people burning effigies on your lawn or anything.

In 2014, Rowling tweeted a reply to a fan strongly implying that Hogwarts was a safe place for LGBT students: 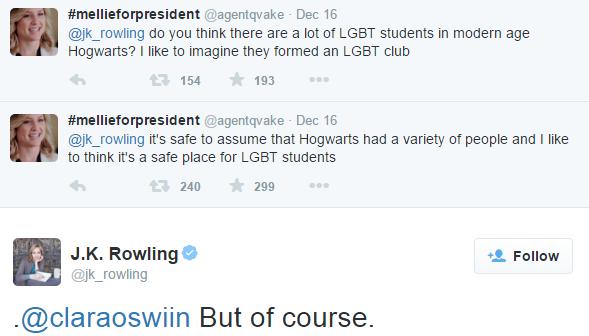 @agentqvake1: do you think there are a lot of LGBT students in modern age Hogwarts? I like to imagine they formed an LGBT club

@agentqvake: It's safe to assume that Hogwarts had a variety of people and I like to think it's a safe place for LGBT students

@jk_rowling: But of course

It's unclear from this tweet whether this acceptance was widespread; it's entirely possible that Hogwarts was a safe place purely because Dumbledore kept it that way, or because it's attitudes were kept secret from the rest of the Wizarding World. However, another 2014 tweet suggests that Wizards are all about that blood purity and, quote, "don't give a damn" about sexuality discrimination:

@_Paaulaisadora: Unfortunately even the most powerful wizard in history is discriminated against for their sexual orientation

@jk_rowling: Only by ludicrous Muggles. The wizards don't give a damn - it's all about the magic for them.

Not the answer you're looking for? Browse other questions tagged harry-potter sexuality or ask your own question.