Are vampires a type of ghost? [closed]

Me and my friends are having somewhat of a debate to find out if a vampire is a type of a ghost or not. I am convinced that vampires are a kind of ghost, yet they are not the exact same thing; as how a lion and tiger are still different, but from the family of cats. Is a vampire a type of ghost?

TL;DR: No, vampires are not ghosts.

Because the question is so broad, it is very difficult to say anything more with any certainty. Therefore, I am forced to rely, for the time being, on the broadest definitions of the vampire trope, from the Southeastern European pre-18th century folklore from which the modern trope has primarily evolved.

Key difference: Ghost and Vampire are both considered to be supernatural beings. The main difference between the two is that vampires are considered as mortals, who live up-to 1000 years, whereas ghosts are the soul and spirit of the deceased.
- Difference Between

The claim that vampires live for up to a thousand years is apparently based on folklore rather than modern vampire fiction. In most modern works of fiction, including, most importantly, Bram Stoker's Dracula, vampires are effectively immortal, and can only be killed through specific means (e.g., a stake through the heart, exposure to sunlight, or fire).

The site linked above features this chart showing the differences between the vampires and ghosts of folklore: 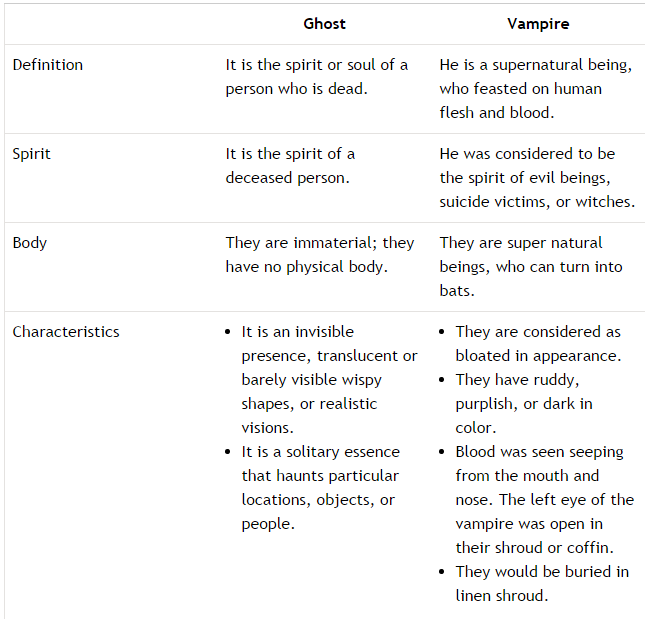 Not the answer you're looking for? Browse other questions tagged vampire ghost or ask your own question.

14
A collection of stories about young monsters and vampires
29
What was the first story to depict a vampire who does not feed on humans?
4
Anime movie about a boy in a ghost town
12
How Do You “Punish” a Ghost?
3
Ghostly book I can't remember the name of
36
Why are the people in Hogsmeade scared of the Shrieking Shack?
9
How was Moaning Myrtle able to help Harry?
12
Cynical vampire and her underwear-stealing lover