In the Wheel of Time series, the Seanchan are invaders from across the great western ocean, descended from settlers originating in the main continent, speaking with drawling accents - in other words, a caricature of Americans. They drink a black, bitter drink known as kaf, which sounds to me like it's meant to be coffee.

Is there any evidence for this other than its colour and bitterness? E.g. do we ever learn that it's made from ground beans, or acts as a stimulant, or has any of the other properties of coffee?

It's safe to assume it's a coffee-based beverage.

Here's some choice excerpts from the series:

The actual first appearance, in The Shadow Rising:

“I regret that these lands do not know kaf,” he said, taking a seat at the table. “Even in Cantorin, only the Blood still have kaf. Or it was so when I left. Perhaps supply ships have arrived from Seanchan since. Tea must do. Fix me tea.”

Another showing in A Crown of Swords:

Suroth raised one of the cups on her fingertips, inhaling the steam rising from it. Her nod was entirely too much permission for Morgase’s liking, but she took a cup anyway. One sip, and she stared into her drink in amazement. Blacker than any tea, the liquid was also more bitter. No amount of honey would make it drinkable. Suroth put her own cup to her lips and sighed with enjoyment.

And in Knife of Dreams there's a chapter named "A Cup of Kaf", which gives us more insight about the culture around drinking kaf than the rest of the series. You'll have to read the whole chapter, but here's where kaf enters:

The scent of freshly brewed kaf began to suffuse the air. “Your kaf, Banner-General.” Setting the tray on the edge of table holding the map, he carefully filled one cup with the black liquid while watching Karede from the corner of his eye. Somewhere in his middle years, he wore a pair of long knives at his belt, and his hands had a knifeman’s calluses. Karede sensed close kin to Ajimbura, in spirit but not blood. Those dark brown eyes never came from the Kaensada Hills. “I waited till the others left since there’s hardly enough for you any more. Don’t know when I’m going to get more, I don’t.”

Some definitions from the books:

We're told officially in the Wheel of Time Companion is that kaf is:

A bitter-tasting hot beverage from Seanchan.

And also in the Companion, under the the Old Tongue dictionary:

a caffeinated beverage, brewed from the roasted seed of a fruit-bearing shrub cultivated in the mountains of Seanchan

Which was also found earlier in @Himarm's answer from the eBook. My transcription from the US print edition matches.

And from the Glossary at the back of The Shadow Rising, the first book kaf appears in:

Some supposition and other clues

If you look at the excerpts, you'll see that kaf is indeed brewed, served black, very bitter, served hot, not to everyone's taste, and sometimes sweetened. It's interesting to note that while Morgase wouldn't drink it, Matrim had no issues doing so in A Memory of Light.

In the real world, coffee beans are from coffea plants, which are flowering, fruit-bearing shrubs, bushes, or small trees. Coffea only grows in a limited number of places, which have similar climates and are found in the Tropics. You'll notice from the excerpts is that kaf is only found in Seanchan. If kaf is indeed coffee, and has similar climate requirements, then it makes sense that it would not be found in the lands around Andor (or Randland, to fans) or the Aiel Waste.

Besides the description, we can look at the name itself. Kaf sounds like the first part of "coffee" or "café". Other such name-related references are made throughout the series. For instance, zemai is corn, and is an anagram of "maize" and a play on corn's scientific name "Zea mays", the Native American Indian word for corn. Then there's t'mat (tomatoes) and algode (cotton, literally the Spanish word for cotton).

After reading @N_Soong's answer, and going over the excerpts compiled here, I personally now believe the drink to actually be espresso, rather than coffee. The size of the cups and the absolute bitterness of the drink compared to even bitter teas, makes me believe so. Espresso is generally served in very small cups, which would be easy to balance on fingertips. And while good coffee is usually black in appearance, I would be just as quick to call it dark brown. Whereas kaf is always, very clearly, a black color, even when spilled:

The cup dropped from Morgase’s hand, smashing to bits on the floor, spraying the black kaf.

According to the wheel of time companion

a caffeinated beverage, brewed from the roasted seed of a fruit-bearing shrub cultivated in the mountains of Seanchan.

A bitter-tasting hot beverage from Seanchan.

It appears to have a strikingly similar taste, appearance, and smell, to our coffee. 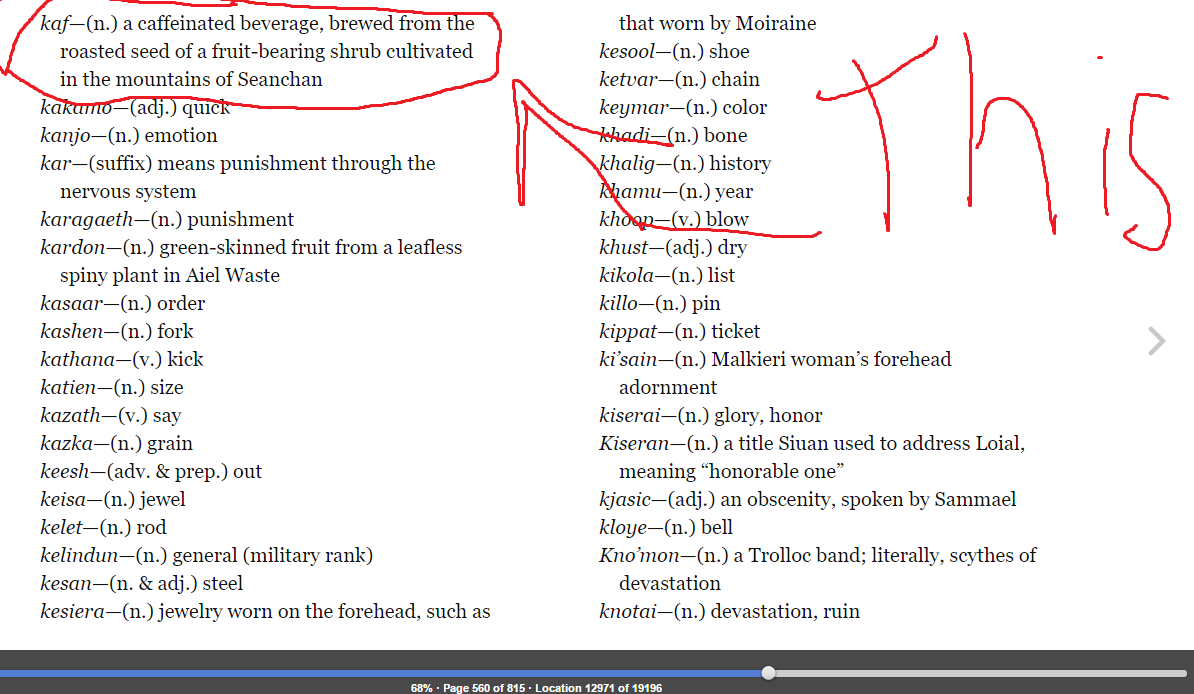 The Wheel of Time Wiki page for Kaf explains in the 'Parallels' section that:

Kaf is analogous to coffee, or possibly espresso. It is served in small cups that resemble demitasse cups, but without handles.

This doesn't provide a source but, as mentioned in @CreationEdge's post, it's quite likely that the word 'kaf' was derived from coffee or caffeine

Not the answer you're looking for? Browse other questions tagged the-wheel-of-time food or ask your own question.