Does the Joker care about Harley Quinn?

The Joker seems to care little about anything other than himself (and to some extent, Batman), whereas Harley Quinn is quite literally mad for the Joker.

Has the Joker ever shown any genuine concern or affection towards Harley? 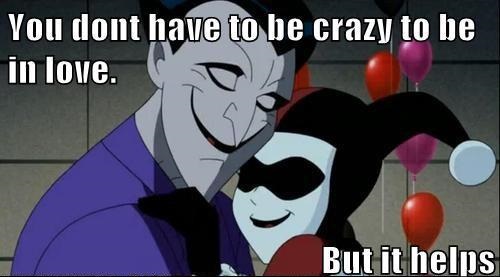 I would prefer sources, if any, from comics.

Yes. In the October 1999 comic Batman: Harley Quinn, he tries to kill Harley precisely because he is starting to have feelings for her and dislikes this in himself: 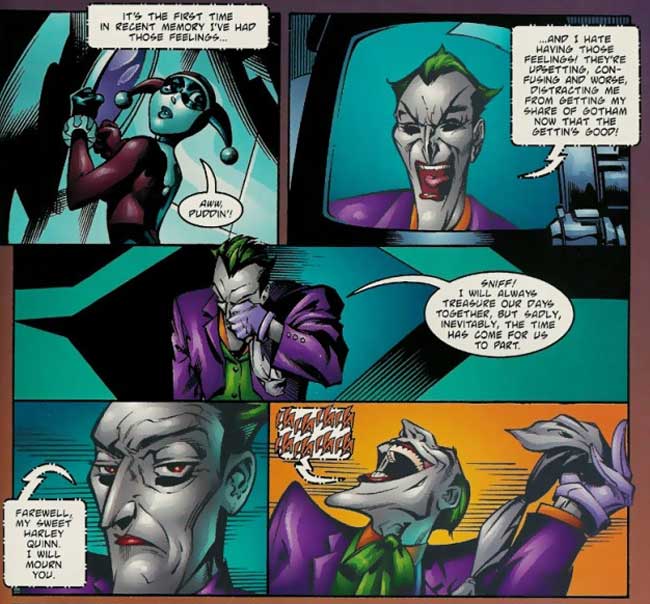 The relationship between Joker and Harley was always complicated but Joker did feel affection/love for Harley at some point in time and the results were rather contradictory as he tried to kill her.

Quinn's relationship with the Joker is one of the most complex and twisted love affairs in comics: as with all people, the Joker is abusive and manipulative towards Harley, but, just as often, there's evidence of camaraderie, playfulness, and genuine affection towards her. She's the only person who's managed to become intimate on such a long term basis with the Joker, who, in turn, displays occasional moments of confusion and discomfort which results in attempts to kill her.

The Iconic Depiction of Harley Quinn
One time, when the Joker realized he had very deeply hidden feelings of love, he sent Harley off in a rocket

Maybe wasted effort, but I think there is so much going on that isn't being pointed out.

Joker being clinically psychotic, for one. Is someone in his shoes capable of feeling that deep a 'good' emotion? I mean, he is essentially living in an unending psychosis (Quote from his profile on DC Wiki: "He is constantly adapting his personality and his psychosis to respond to the world around him, sometimes a harmless trickster and at others a brutal mass-murderer."), and that's ignoring his sadism and narcissism sprinkled on top of it.

That being said. Though it is possible for Harley to be blindly in love with him, I highly doubt that. This isn't some high school cheerleader that is in love with being in love. This is a mastermind and psychiatrist that worked with Joker during his time in Arkham Asylum. It can be argued that she is deluding herself, but that kind of delusion won't stand up to multiple attempts on her life, not with her intimate knowledge of the inner workings of the mind.

In other words, he can't be in love in the sense we understand it. That's not possible, not in his situation. However, it is possible that he loves her in his own, sick, twisted way and that she understands enough of his inner workings to appreciate that about him. Hence their twisted off-on relationship.

But maybe that's just me fangirling on Harley ^_^

In The New Batman Adventures episode, Beware the Creeper (this series was the follow-up to Batman: The Animated Series, where Harley Quinn was created), there is one scene where she is standing in a giant pie singing a song to Joker. There were brief flashes of a look that wasn't mocking on Joker's face. I always read that as him realizing he loves her but can't admit it, even to himself.

I really think Joker can't really admit it to himself that he cares for her. He does, it shows simply because he keeps her around unlike anyone else, but I don't see him understanding how to be in love. Instead, he just wonders why he keeps her when he gets rid of every other henchman he has.

Like most things, this is open to interpretation. Some people want to believe that Joker had feelings for her, others are skeptical that Joker cares much for anyone other than himself. But that's itself is open for interpretation, for example you could say the joker only cares for himself but then you look at Heath Ledgers Joker who didn't even care about himself, that type of Joker would only keep Harley around as an example of what a 'bad day' could do to someone. I think whether or not Joker cares about Harley is dependant on which Joker we're talking about. Excuse any grammar/spelling mistakes my phone sucks.

The reason people ask whether the Joker has any love or affection for Harley is mostly because of the movie Suicide Squad. I honestly loved the movie since it depicted love between them. However, when it comes to the comics itself, I don't think that they will get together. Joker only loves himself and he is just using Harley. He is so twisted, that he wanted to kill Harley because of the feelings he started to have within.

I believe that since joker was so badly abused as a kid, that he only knows one kind "Affection". and because of how messed up joker is and psychotic, there are a lot of reasons as to why he is they way he is towards Harley. that being said, he has probably seen how his father treated his mother and only knows that type of love and doesn't realize how horrible he is to Harley. there are a lot of reasons and it isn't clear as to whether or whether not he has feelings for Harley. But if he does, he doesn't want to. People who grow up under such harsh circumstances have troubles with emotions and it's just a really messed up situation.

1
Does the Joker say he loves Harley Quinn?