How well known were the events of the original “Star Wars” trilogy in the general galaxy? Or was it all about clandestine special operations missions?

Preface: I am aware that there are other threads that discuss the Jedi/Sith aspects of common knowledge in the Star Wars universe such as this one, this one and this one. My question is not about knowledge of the Jedi/Sith stuff as much as the “wars” of Star Wars itself. To me it seems as if the general population of the galaxy knows they are oppressed, but are not really aware there is an active war to end that oppression regardless of the “religious” aspect that seems to have started it all.

So the some of the trailers for the new film, Star Wars: The Force Awakens have a key scene where Han Solo states:

It’s true. All of it. The Dark Side. The Jedi. They’re real.

Okay, so I understand how the whole mystical concept of “The Force” might have been lost by the sands of time. But what about the rest of it? Objectively thinking of how the original trilogy was presented it seems everything was secretive or clandestine in many ways:

And there we go. It seems that everything that transpires in the the original trilogy are all special operations and “need to know” operations at best carried out by two opposing sides who might be fighting for larger power, but it’s not like — for example — a World War II struggle it seems. It all seems like small scale operations in a lager conflict much like action films such as The Guns of Navarone or Where Eagles Dare.

So in this context, what exactly did the “wars” in the Star Wars actually mean as far as awareness goes throughout the galaxy? My desire for “canon” extends into the modern definition of Star Wars canon which means Disney canon as well; no fan-fiction or wild guesses please.

Again, it seems the new series of films will you touch on how “legendary” yet not real these events seem to contemporary residents in the Star Wars universe goes. But is there an canonical material that explicitly states something like, “The war against the Empire was important, yet not directly known by most inhabitants in the galaxy/universe of Star Wars.”

PS: FWIW, this all seems odd to me because to my knowledge — in the context of our own conflicts on Earth — even in pre-Internet/pre-modern communication times, wars and conflicts were known or conveyed in some way to even the most menial people in society. You talk to someone about the Crusades, the Civil War or even World War I nowadays people at least know that some kind of war happened even if they do not know any specifics of the conflict. But in the Star Wars universe, average citizens seem fairly clueless despite having apparently better technology and communication methods.

Looking at the Empire's citizens' view of the Republic in the X-Wing series we see much propaganda and just lies spread to discourage rebel support. Coruscant (and probably other planets) had large museums constructed as monuments to the emperor and the empire.

All the displays... were slanted toward making the viewers believe everything the Emperor had done had been for their specific good.

and a long quote, well worth the read:

A holographic image of Darth Vader sizzled to life when wedge had approached. "Behold my Master and weep. He has been stolen from us by those who embrace hatred. The Emperor had learned the rebels had stolen plans for a Planetary ore extractor and intended to use the one they fabricated on Endor on inhabited planets. He assembled his fleet, and heedless of personal danger, he had me take him to Endor. He infiltrated the half-completed extractor, offering these Rebels his forgiveness and a hand of friendship. They rejected him and attacked his fleet. My master had no alternative but to destroy this Death Star himself, perishing in the process so his citizens could live on. I was slain with him, but my death did not distress me, for it came in service to my master.

So much of what the citizens of the Empire hear is completely fabricated or twisted against the Rebels.

As for Alderaan's destruction, while it is not really known what happened specifically to the planet, the Rebels are blamed for it:

The fear that lingered in everyone's heart concerning the destruction of Alderaan was shifted into fear directed at the Rebellion.

Edit: I found another mention of propaganda,

"If not for various holodramas that painted Jedi Knights as villains..."
X-Wing: The Bacta War Chapter 1 page 3

So even the media is involved in the distortion of the truth. Such sources of information may be the only info some individuals see and so have no reason to question their validity.

The specifics of Rogue Squadron and the subsequent efforts to transport the Death Star plans were not public knowledge.

The destruction of Alderaan was well-publicized, and intentionally so.

Dantooine is too remote to make an effective demonstration - Tarkin

Its destruction, combined with the Empire's unsubtle attempt to kill off any off-world Alderannians, lead to a surge in anti-Imperial sentiment. This in-universe example of Rebel propaganda demonstrates this. 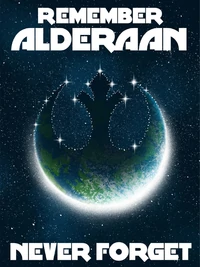 Confusion followed the first Death Star's destruction. According to Lost Stars, it was initially assumed to be Rebel lies by some. However, it was soon well-known enough for the Rebel forced to be "bolstered," according to Battlefront: Twilight Company. The Hutt Council also publicly acknowledged it, according to The Rebel Files. It was not initially publicized that Luke did it. However, by the time of Bloodline, six years before The Force Awakens, it was public knowledge. However, a faction of "Death Star truthers" who believed the Death Star was sabotaged by a rogue Imperial had also arisen at this point.

The Bureau distributed more than twenty thousand recordings showing Yavin 4 telemetry of the destruction of the Death Star. - Propaganda

For his safety, Rebel messagesmiths avoided publicizing Luke Skywalker’s name, but the tale of a young Rebel pilot with minimal combat experience who destroyed the Empire’s ultimate weapon was too powerful to keep secret for long. - Propaganda

The Empire Strikes Back

The results of the Battle of Hoth were well-known, as shown by the following conversation between two smugglers in Uprising.

"You have heard of Hoth, I assume?"

"Snowball the Rebels were hiding on, right?"

"Before the Imperials struck a year ago, yes. Now the battleground is littered with wreckage."

Additionally, the battle was well-documented and discussed by in-universe historians, according to Complete Locations.

From a Certain Point of View: The Empire Strikes Back has many examples of Cloud City citizens evacuating from the platform due to the Empire's incursion. Knowledge of their presence there would therefore be in the public, though likely not of much interest to most.

Luke and Leia's parentage is not publicly exposed until Bloodline.

Jabba the Hutt was an extremely important figure in the underworld. He headed the Hutt Council which held enough power to negotiate with the Empire itself. His death, as well as the power vacuum it created, were public knowledge.

"I know that things are changing. Not just in the galaxy, but here at home, too. The Hutts still haven't shaken out who's next up to fill Jabba's throne... Seems like this might be a new day for Tatooine." - Vanth, Aftermath

The results of the Battle of Endor were also broadcast across the galaxy, as seen in media such as The Mandalorian and Uprising.

Efforts such as the Iron Blockade, also seen in Uprising, attempted to censor the results of the battle, but quickly fell through. The Emperor and Vader's deaths, and the Empire's loss, were soon well-known. However, much of the public believed that Palpatine was assassinated by the Rebellion (Alphabet Squadron).

Yes the galaxy knew about the destruction of Alderaan and were very upset about it. The people knew about the battles of Yavin and Endor, who won those battles and who lost them.

The galaxy learned these things by the Holonet transmissions sent across the galaxy. There were mass defections after the battles of Yavin and Endor, top imperial leadership was lost at both Yavin and Endor and the deaths of Vader, and the Emperor. The people learned this by the way of the Holonet transmissions broadcast around the entire galaxy. The information was passed on by both imperial and rebel soldiers.

This information was told in the Aftermath trilogy.

Given that the current answers to this question are now several years old, and canon marches on, I'd like to add that two instances in The Mandalorian shed new light on this question.

In season 1’s Chapter 4: Sanctuary, Cara Dune is discussing with Din Djarin about her time as a Rebel drop trooper. While as a member of the Rebel/New Republic armed forces, she would have inside knowledge, she discusses the Battle of Endor as if Djarin would be well aware of what happened there.

“Saw most of my action mopping up after Endor. Mostly Ex-Imperial Warlords. They wanted it fast and quiet. They'd send us in on the drop ships. No support, just us. Then when the Imps were gone, the politics started.”

Then in season 2’s Chapter 9: The Marshal, the titular character, Cobb Vanth marshal of a backwater town in the middle of nowhere on Tatooine recounts a flashback.

“It started after we got news of the Death Star blowing up. The second one, that is.”

We have a clear shot during this flashback of the Holonet news broadcasting the actual destruction of the second Death Star. Showing that even in the far flung parts of the galaxy, this news was quickly disseminated to all and sundry. 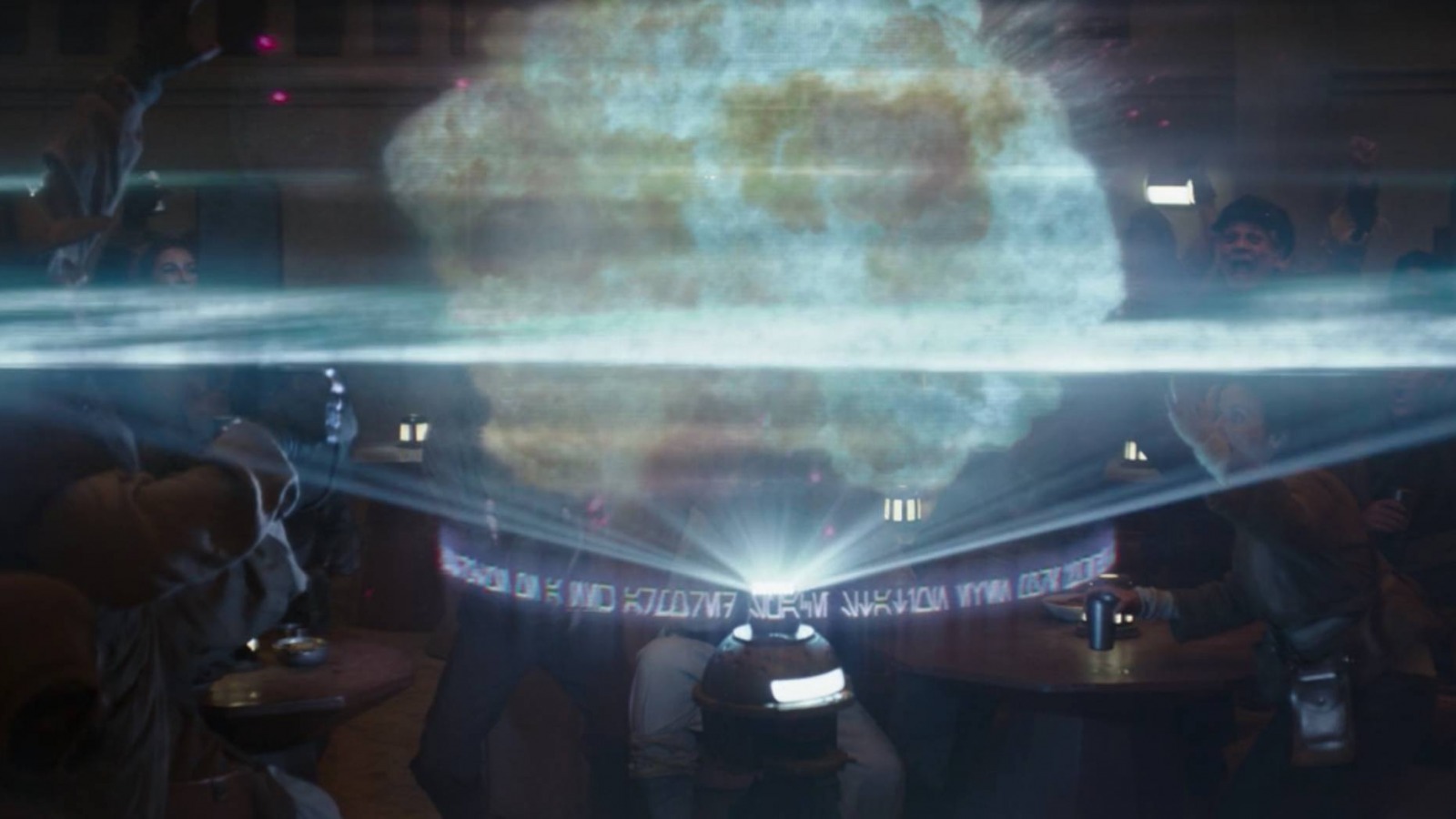 So, while there may be some aspects of the original trilogy which are on a need-to-know basis, the destruction of the second Death Star by Rebel Alliance is widely known throughout the galaxy.

I pretty sure the instant destruction/vaporization of an entire Core planet (Alderaan) and their population would be quite notorious and couldn't brushed under rug as a casualty of a "special op". If we're using Earth wars as an analogy, it's gonna be a long time before the nuking of Hiroshima & Nagasaki falls into legend/did-it-really-happen category and shows up on Snopes.

4
Did most people in the Star Wars galaxy know of Luke Skywalker's role in destroying the Death Star?
126
Why would the Force become so mysterious and unrecognized after only 20 years?
119
Which wars are "Star Wars"?
25
Why did nobody know about the Sith Empire?
31
What was Darth Vader's official role (or rank) in the Empire?
3
Why are there people who don't believe Jedi ever exist?

31
Why hadn't Han Solo paid Jabba?
14
How old is recorded history in the Star Wars galaxy?
6
Looking for a non-canonical Star Wars picture book
5
Is murder a crime in the “Star Wars” universe?
8
Was a droid uploading into the Millennium Falcon Navi-Computer inspired by the old Han Solo novels?
11
How does education work in the Star Wars galaxy?
2
Why didn't the Empire disarm the populace?
56
Why is a living creature being frozen in carbonite in “The Mandalorian” so common when it seemed so risky in “The Empire Strikes Back?”
11
Why would Han Solo think the Millennium Falcon was famous?