Do the Grievers in the movie match the description of them in the book?

I have not read any of the Maze Runner books and I really liked the Grievers in the first film.

But do the Grievers in the film match the description of them from the books?

The book Grievers are more slug-like and the film ones are more spider-like.

This article briefly describes the difference in the Grievers from book to film (emphasis mine):

In both the book and the movie, the Grievers are absolutely terrifying. It has to be something to do with their amalgamation of parts and the fact that they only come out at night. In the novel, however, they’re described as being part animal and part machine, rolling and slug-like, covered in hair and slime. And while this certainly is nightmare-inducing, the decision to make them more like mechanical spiders than part slug does wonders to keep the action ramped up and the tension high.

And this article goes into some more detail:

In the book, the Grievers are almost sluggish in the sense that they don’t have a distinct front or back, they are super slimy, and they curl up and roll to move quickly. When they move it sounds like knives are being dragged across the floor and their screeches give you immediate goose bumps.

In the movie, they almost take on more of a gooey spider form where they do have a distinct face, their legs are like knife-like gadgets, and their screams are spot on. Whenever you see a Griever in the movie, you are terrified and because of that, they hit the mark.

More canonically, Ken Barthelmey, one of the designers, said (emphasis mine):

"Designing the scary Grievers had many challenges. Slugs and coconut crabs were a huge influence for me in finding the overall body shape. The head was a bit tricky, since in the book they have no face, only a big ugly mouth. It's basically a mixture of caterpillars, bulldogs and even piranhas.

"Wes wanted some specific changes and attachments in the design, like this mechanical scorpion tail. That was a bit challenging because my first design couldn't work with a scorpion tail. Hence the body structure needed to be much lower on the ground."

On the same page, you can look at some of the concept art used to design the film Grievers, e.g.: 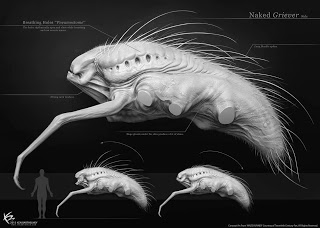 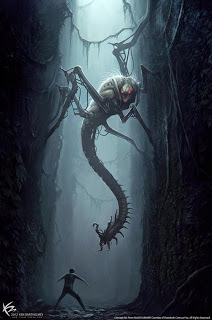 Not the answer you're looking for? Browse other questions tagged adaptation-comparison the-maze-runner or ask your own question.

5
Maze Runner Movie to Second Book
5
Where is The Maze?
2
Why just boys in Maze Runner?
5
Can I read Kill Order before Maze Runner?
5
Why did the Grievers not jump back on the cliff?
2
How did Thomas learn about the Right Arm?
4
What's the point of the Maze in Maze runner?
0
What happens to Teresa in The Death Cure?
2
In Maze Runner book 3, why doesn't Frypan try to get out of the Maze?