Does Shelob have tusks?

In a recent conversation on Mos Eisley, a debate started as to whether or not Shelob had tusks. Does she have tusks, or fangs; what is her in-book description? 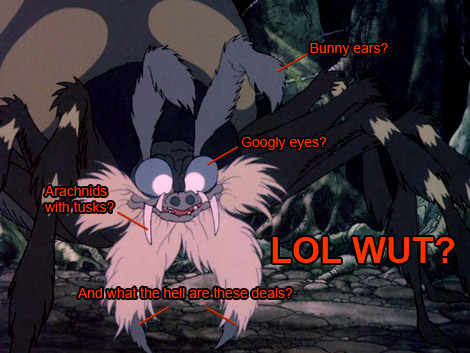 ^^ not Shelob, but the picture that sparked the debate, this I assume is a Mirkwood spider, who are distant relations to Shelob (I believe).

There's almost no physical description of Shelob in the books; the best we have is that her venom comes from a beak:

Slowly he raised his head and saw her, only a few paces away, eyeing him, her beak drabbling a spittle of venom, and a green ooze trickling from below her wounded eye.
-- The Two Towers, chapter Shelob's Lair

But since Lord of the Rings is a fantasy novel and not a biology textbook, the word "beak" may be an imprecise reference to chelicerae, a spider's mouthparts. On a wide scale, chelicerae may look beak-like, but they do have fangs at the end: 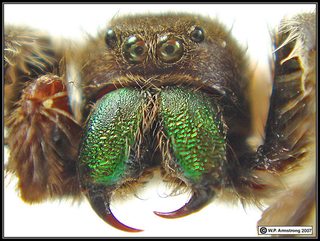 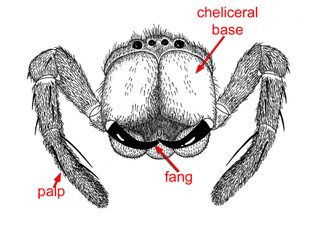 Whether you'd call these "tusks" is up to how precisely you define tusks. Mammalian tusks, such as the familiar ones of wild boar, are made of keratin (the same as hair and fingernails), but arthropod anatomy is quite different from that of mammals: e.g. they have no bones, as the hard part of their body is all on the outside (the exoskeleton).

What about the other labels on that picture?

he was aware of eyes growing visible, two great clusters of many-windowed eyes - the coming menace was unmasked at last. The radiance of the star-glass was broken and thrown back from their thousand facets, but behind the glitter a pale deadly fire began steadily to glow within, a flame kindled in some deep pit of evil thought. Monstrous and abominable eyes they were, bestial and yet filled with purpose and with hideous delight
-- The Two Towers, chapter Shelob's Lair

Not really; the closest we have is horns:

clustering in her out-thrust head. Great horns she had
-- The Two Towers, chapter Shelob's Lair

"And what the hell are these deals?"

It's not clear what those clawed hairy things at the front are meant to be. They could be either mouthparts (chelicerae, as discussed above - in which case the things labelled as tusks are probably not realistic) or legs. In the latter case, they fit the description given in the books, except that they don't bend up above her back as the other legs in the picture do:

Her legs were bent, with great knobbed joints high above her back, and hairs that stuck out like steel spines, and at each leg's end there was a claw.
-- The Two Towers, chapter Shelob's Lair

In an essay Tolkien wrote criticizing Pauline Baynes’ poster-map, one of the things he took issue with was her depiction of Shelob. 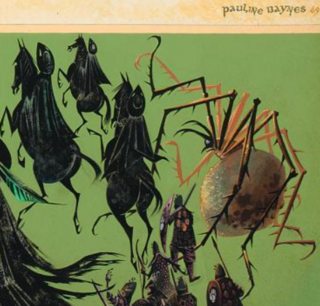 Tolkien then describes how Shelob should have actually looked.

Shelob is not described in precise spider terms; but she was "most like a spider" (II 334). As such she was enormously magnified; and she had two horns and two great clusters of eyes. But she had the characteristic tight constriction of spiders between the front section (head and thorax) and the rear (belly) — this is called (II 334) her "neck", because the rear portion is swollen and bloated out of proportion. She was black, except for the underpart of her belly, which was "pale and luminous" with corruption. She would have eight legs, properly disposed, four a side, where they could function as organs of movement and seizure.
Private memorandum critiquing Pauline Baynes’ poster-map, quoted in The Nature of Middle-earth

Not the answer you're looking for? Browse other questions tagged the-lord-of-the-rings tolkiens-legendarium the-hobbit or ask your own question.

47
Do Balrogs Have Wings?

36
Did Shelob Die?
28
Is Shelob a Maia?
30
Why was Sting able to kill the Mirkwood spiders with ease, but not Shelob?
5
Does Thorin have the last Dwarf ring?
92
Why would Shelob own Sauron?
27
Does Shelob have a human form?
142
Why is Shelob considered evil?
50
Did Sauron have the military power to control all Middle-earth?
14
What do the family relations between the Valar mean?