How does the resistance of a substance being cut affect the handling of a lightsaber compared to an equal-sized sword?

When two lightsaber blades meet, or a lightsaber stops a blaster beam, physical force is transmitted back through the handle to the user.

When cutting ordinary matter is any force transmitted to the user? Does the type of matter affect the physical force used? Does the user have to press harder?

If the strength/intensity of the lightsaber blade remains constant but the material being cut becomes thicker or higher density then one would need to apply more pressure in order to continue cutting at the same speed. Otherwise the cutting process becomes slower.

This is appears to be what happened when Qui-Gon Jinn was cutting the door in The Phantom Menace. At first it was a single door so he was cutting a shallow circle with relative ease.

However the Viceroy then had the additional blast doors closed as well which greatly increased the amount of material the blade had to cut though. Qui-Gon realized this and abandoned the wide, shallow circle he'd been cutting, opting instead for a deeper and slower cut since there are 1) more doors to cut through and 2) the blast doors are likely made of some kind of higher density material. 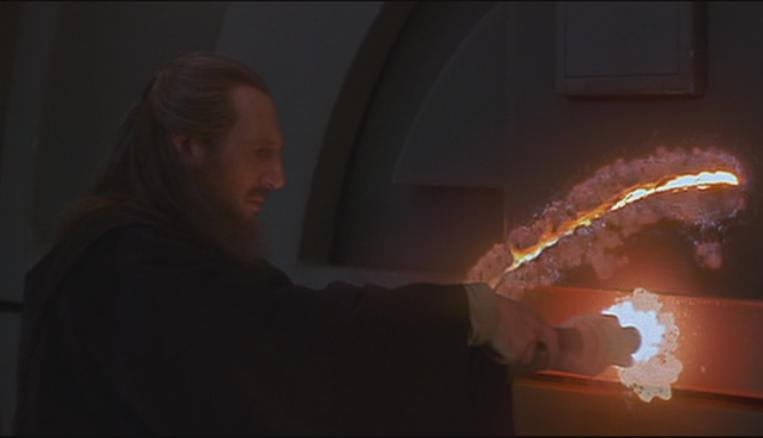 So, per the films, it seems that when using a lightsaber the effort needed to cut something varies depending on the amount and density of the matter being cut.

Not the answer you're looking for? Browse other questions tagged star-wars weapon lightsaber or ask your own question.

18
Do lightsabers need a Force users' effort to block Force Lightning?
10
Outside of Order 66 - does a blaster ever beat a lightsaber?
8
Why don't non-Jedi carry lightsabers as tools?
15
How is Kylo Ren's lightsaber able to have a cross at the hilt?
16
Why did Obi-Wan lop off Ponda Baba's arm?
20
How Does Kylo Ren not stop Chewbacca's blaster?
52
Why don't lightsabers have guards?
7
How does a lightsaber behave in a confined space?