What's the solution of Bootstrap Paradox without the involvement of multiple timelines?

In Doctor Who, there's no concept of multiple timelines. I remember The Doctor seeing himself after travelling back in time (viz. when Rose saved her father and in the recent episode Before The Flood). So, all events in Doctor Who happen in the same timeline.

Another thing he has is a passion for the works of Ludwig van Beethoven.

And one day he thinks, what's the point of having a time machine if you don't get to meet your heroes? So off he goes to eighteenth century Germany. But he can't find Beethoven anywhere. No one's heard of him, not even his family have any idea who the time traveller is talking about.

Beethoven literally doesn't exist. This didn't happen, by the way. I've met Beethoven. Nice chap. Very intense. Loved an arm-wrestle. No, this is called the Bootstrap Paradox. Google it. The time traveller panics.

He can't bear the thought of a world without the music of Beethoven. Luckily he'd brought all of his Beethoven sheet music for Ludwig to sign. So he copies out all the concertos, and the symphonies and he gets them published. He becomes Beethoven. And history continues with barely a feather ruffled. But my question is this. Who put those notes and phrases together? Who really composed Beethoven's Fifth?

But, without the concept of timeline, who really composed the Beethoven's Fifth? If something artificial exists, there must be a creator.

I think that's the point. The same happened in "Blink" (who first wrote the DVD easter eggs?), "The Big Bang" (How did The Doctor get out of the Pandorica?) and in the same episode you refer to ("you don't understand. When exactly did I have those ideas?"). It's the Chicken/Egg problem. Which one came first? Moffat seems to love his stable time loops. We simply can't tell the cause from the effect.

EDIT: Did you obey the Doctor and google it? This is what Wikipedia has to say:

As I said, cause and effect can't be differentiated. That's why it's a loop.

While The Doctor did claim that this was a hypothetical situation, it did happen on a smaller scale in several previous episodes.

Unfortunately, like everything else in Doctor Who, the answer is that "time doesn't work that way". That is, the only reason the Bootstrap Paradox exists is because humans insist on seeing time as linear: it moves from A ---> B, and time travelers are moving "backwards" in time if they go from B ---> A. But as we see over and over, and as put best in "Blink", time is much more "jumbled" than that. Cause and effect simply don't happen the way we experience them.

Basically, "the universe" will rearrange time/space/cause/effect/etc in whatever way it needs to in order to be self-consistent. If Beethoven's symphonies need to exist then they will somehow exist, even if they only exist in the past because they existed in the future. If a time traveler changes the past and does something odd, the universe will reorder itself (as little as possible) to make it ok.

Martha quoted Shakespeare quoting Martha. Amy inspired van Gogh's paintings which inspired Amy. Our hypothetical time traveler became Beethoven so he could grow up loving Beethoven. There is no other explanation because there doesn't need to be, "it just is."

The Time Traveller was familiar with the works of 'Beethoven', but when he travelled back in time, there was no Beethoven the person.

Once the Time Traveller copied out and wrote down the complete works of 'Beethoven', he planted them in the past, so that Beethoven's works continued-

Doctor: And history continues with barely a feather ruffled

Now, it has already been made clear to us that Beethoven never existed. Therefore, the works of Beethoven are sort of like the story of the "world snake" Ouroboros, a snake continually eating its own tail. 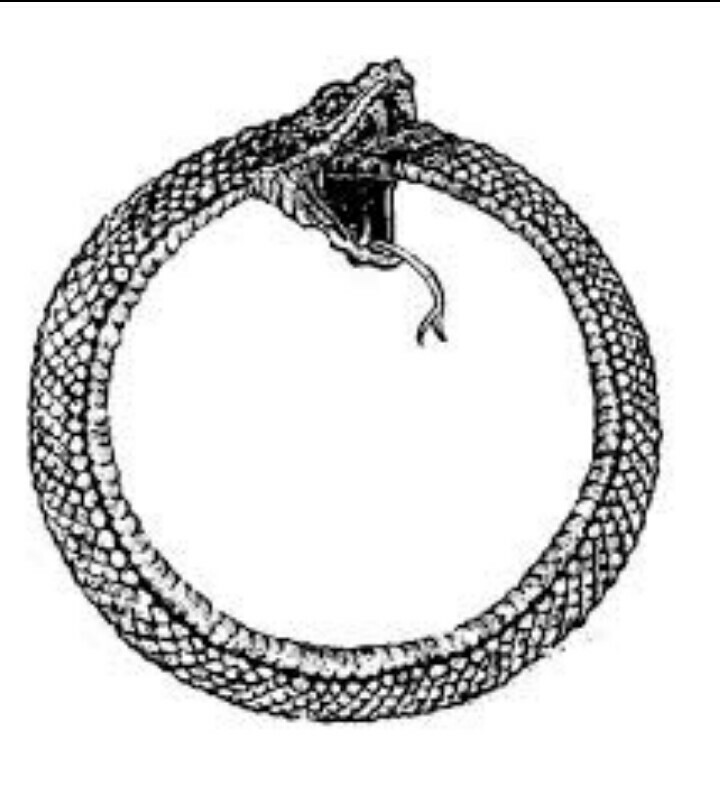 Reference to a similar paradox was dealt with in the Red Dwarf story "Ouroboros ", series VII episode 3, where the character Dave Lister realises that

He is his own father. When he abandons himself as a baby,

No-one's; the use of the word 'Ouroboros', and the consequent revelation that it brings, happened because it had always happened. It was a self-creating event paradox, or a causal loop; and, as it all took place in the same time stream, this solves the Bootstrap Paradox thusly:

They existed because they had always existed, and therefore they would always exist. In a sense, they created themselves; helped along by the fact that the time traveller placed them back in time so that they would exist in their own future.

The egg came first - Marilyn Vos Savant IQ test. So, if we can answer "what came first? Chicken or egg?", surely we can find an answer for this question. I think it's simple - there is no bootstrap paradox in reality. I cant think of any instances where this paradox exists, except in fiction. So, basically, writers can establish any paradox they conceive. As viewers, we can sit back and enjoy but the bootstrap paradox cannot exist in 1 universal timeline (our reality). So, multiple timelines would have to be involved if the writer wants to make it realistic. However, i just sit back and enjoy the story even if it's not fleshed out. Shoot - I watch time travellers and zombies on tv. Ive already suspended disbelief.

Not the answer you're looking for? Browse other questions tagged doctor-who time-travel bootstrap-paradox or ask your own question.

32
How did the Timelords give the Doctor New Regenerations without messing up the Universe?
25
Bootstrap Paradox in Interstellar
10
What is the point of sending anything back in time in the Terminator movies?
2
Which Sci-Fi work introduced the idea of "Resurrection of Dead by Time Travel"?
11
Who came up with the name Melody Pond?
5
How much could the Fifth Doctor remember from Time Crash?
2
Why couldn't the Doctor save Adric?
7
Fifth Doctor Who episode with him monologing about how being a time traveller means you don't solve problems like humans